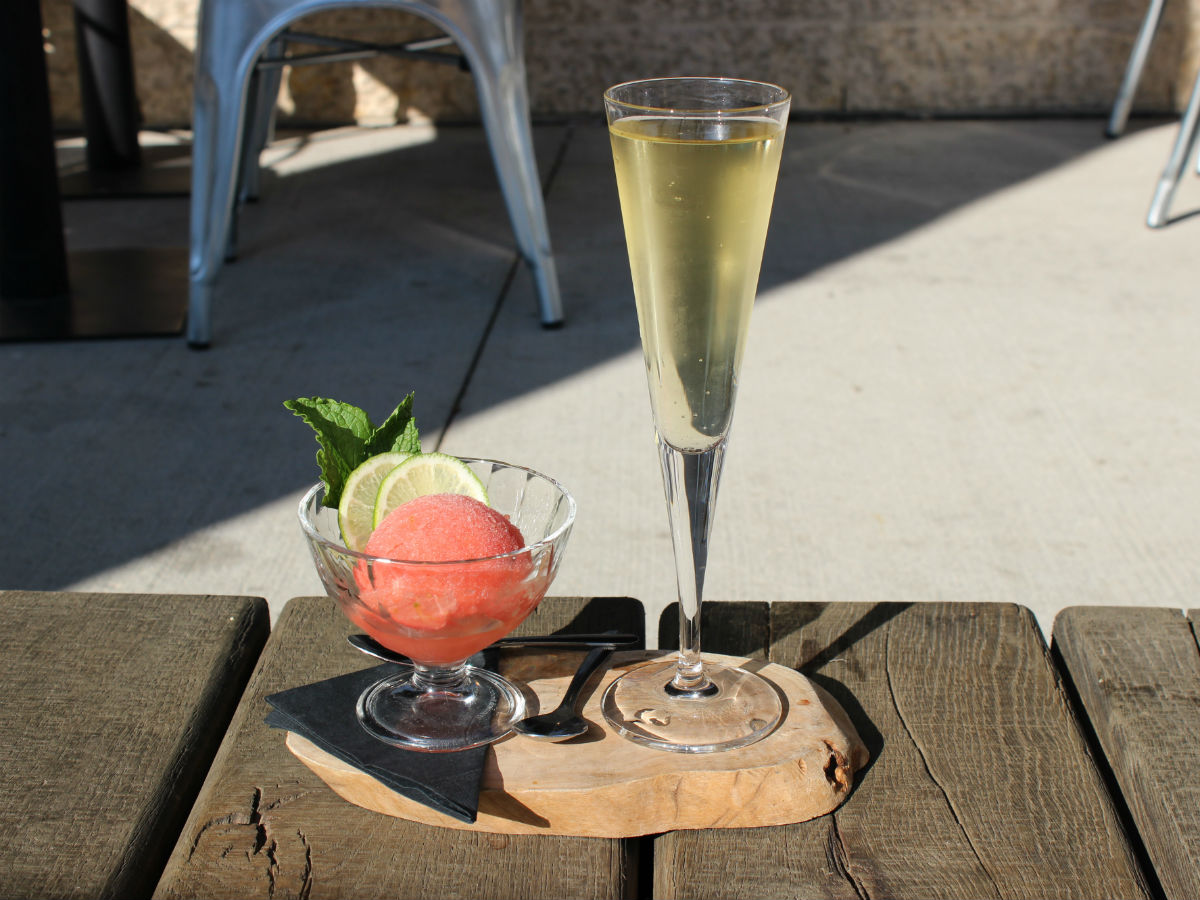 The texture on this frozen treat is amazing, here sits the red ice paired white zinfandel

Patio season at SMITH is the ideal après-anything

If you don't like having drinks and bites of food on a sun-filled patio, we cannot be friends.

And it's not just me. In fact, a recent dictionary definition I found for "ideal companion" read: "someone who also enjoys a drink on a good patio, i.e., après-work pleasure," while, if you continued to read on to "après-work pleasure," it was defined as such: "a sunny patio with comfortable furniture, excellent drinks, and well-executed charcuterie."

Why I'm getting at all this is because yesterday all these points were hit -- and by hit I mean bludgeoned with hospitality -- at SMITH at Inn at the Forks, where their new patio and cocktail menu will have them placed at the forefront of Winnipeg's al fresco scene. 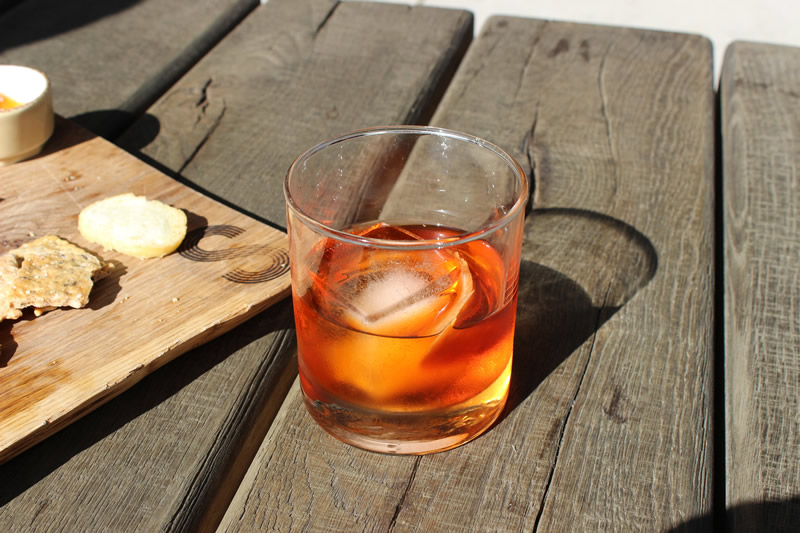 Now, I wrote about Winnipeg's best hidden patios a few weeks ago, and surely the one at SMITH would have made the list were it open yet. Alas, this slender, plant-accented and stately furnished number has only been in operation for over a week, which is just fine, as it is certainly deserving of its own article.

For starters, the new craft cocktail menu developed by bar manager Jason Colatruglio features numerous $12, 2 oz. numbers, all of which are made with hand-squeezed juices, pickled goodies and infused with all manner of flavours.

Take the above pictured Summer Negroni, an update on the bitter-yet-sweet classic. Colatruglio's version at SMITH is made with chamomile-infused gin, Aperol, and white vermouth, and is rimmed and finished with grapefruit zest. It's certainly one of the most refreshing versions I've had, with the grapefruit and sweet, floral flavours of the tea toning down the drink's normally bitter characteristics. 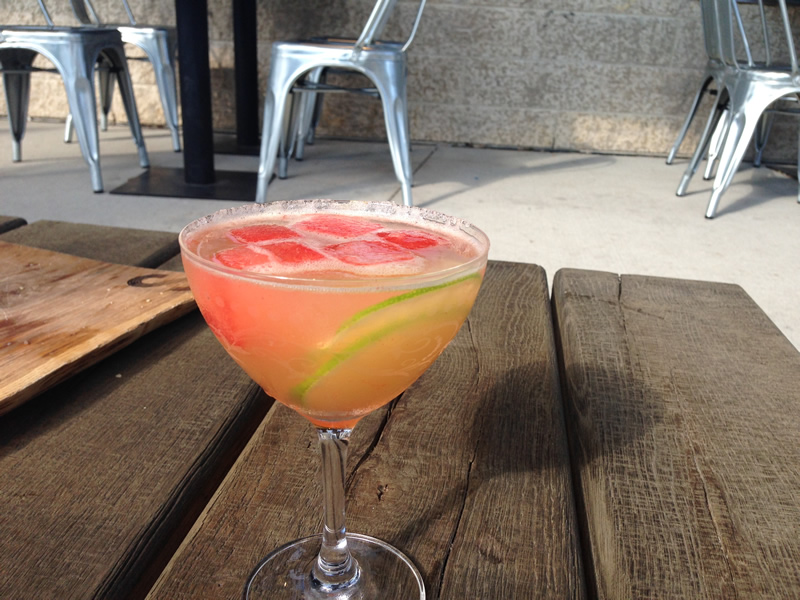 Another favourite of ours was the The Spicy Jalapeño Watermelon Margarita, which Colatruglio makes by mixing lime juice with jalapeño in a shaker -- the heat being picked up by the acidity -- along with tequila and Grand Marnier. It's served in a glass featuring watermelon ice cubes, so the longer your drink sits, the sweeter it gets. (If you are like me, you'll end up eating the ice cubes, which are very refreshing).

Of course, you'll need to balance this booze with some bites, and SMITH's menu has plenty of good things when it comes to using your hands.

For starters, chef Barry Saunders makes a mean charcuterie board, having taken advantage of the hotel's giant walk-in coolers to do a serious amount of curing. 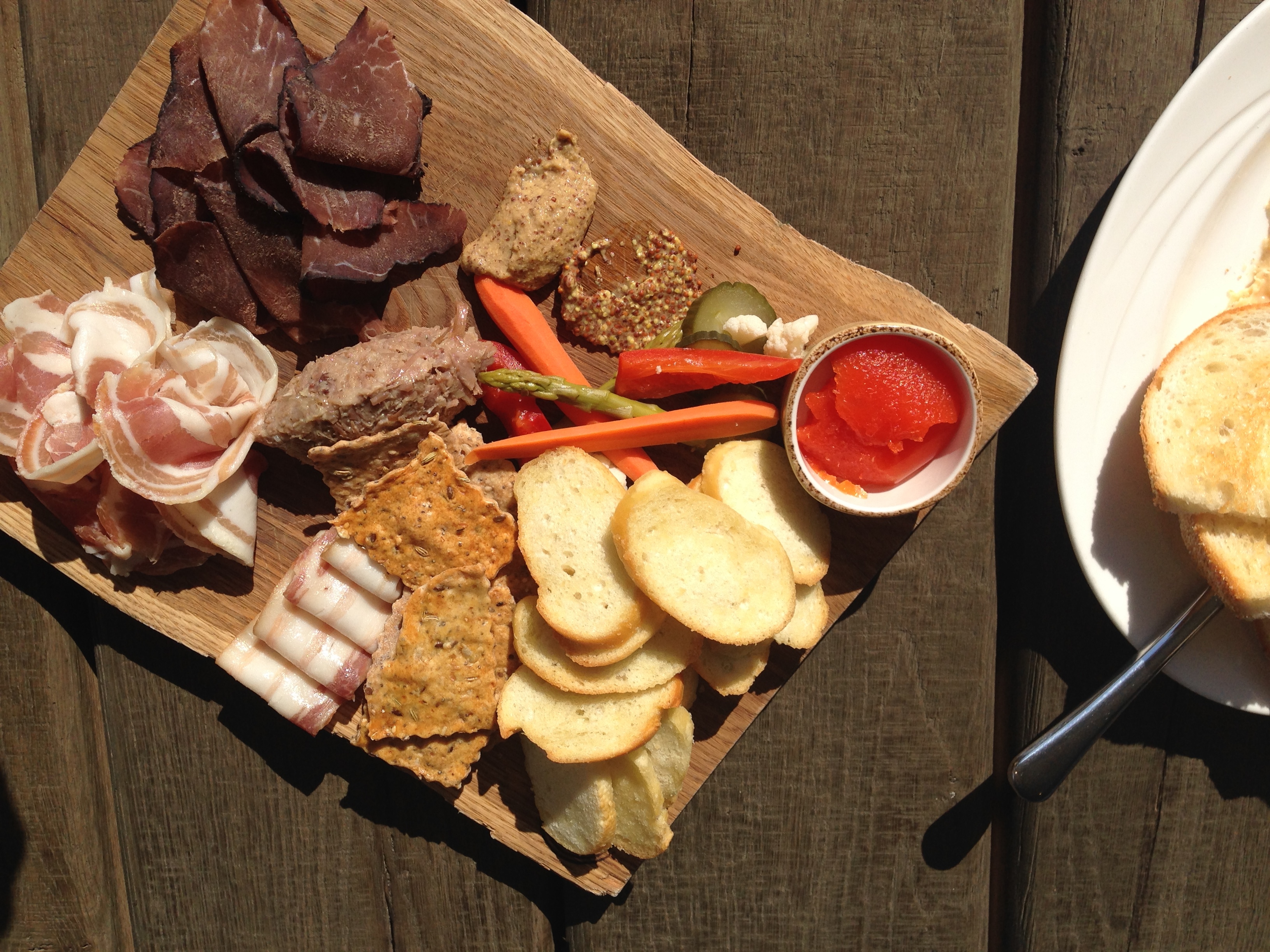 From the board shown above, highlights include the bresaola, which was assertively seasoned making for an excellent drink companion, the bacon (interestingly served as is, with no crisping) and a top-notch duck terrine that we ended up eating spoonfuls of as if it were ice cream. Also big points to the sweet red pepper gelée and baguette slices that were somehow crispy and soft.

The Pounded Cheese was also an interesting take on a spread with a texture and taste that we did not see coming, but one which was certainly welcome. It looks like a creamy hummus, yet has the consistency almost of a chilled béchamel, so a thin layer on the toasted sourdough still resulted in a big punch of salty flavour in every bite. The cheese is spiked with a bit of cider vinegar along with some crunchy garlic chips. If they sold it in a jar I'd consider keeping it on my desk at work -- because we all know aged white cheddar makes your day get better. #cheeserhymes 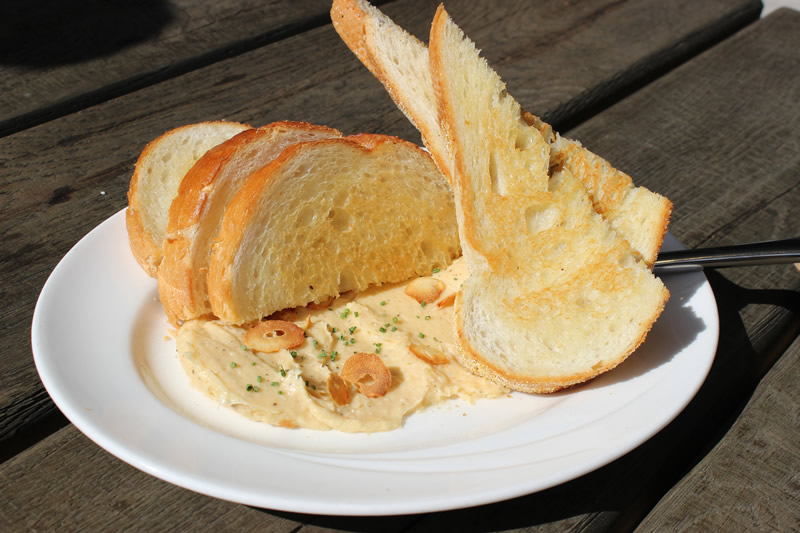 On the lighter side of things, other drinks of note (we pretty much ran through the whole "SMITH-crafted" list; it was tough work, I tell you) were The Cucumber Collins and the red and white sangrias.

The Cucumber Collins sees that iconic slender glass filled with cucumber-infused vodka, lime juice, and pickled cucumbers (made using rice vinegar, simple syrup, and blueberries). It was just about as refreshing as Paul Simon's The Rhythm of the Saints -- because nothing can invigorate you more like the opening of "Obvious Child."

As to the sangria, which unlike most restaurant sangrias that are weak and watery -- generally made with bag-in-a-box plunk, SMITH's is vibrant and you can still taste the wine and liqueurs. This is the one item Colatruglio would not tell us about -- which is fair game because, like feelings of resentment toward a former basketball coach who did not let you take the big game-winning shot, a good sangria recipe is a thing you should guard closely. #Iwasmoneyfrombehindthearc 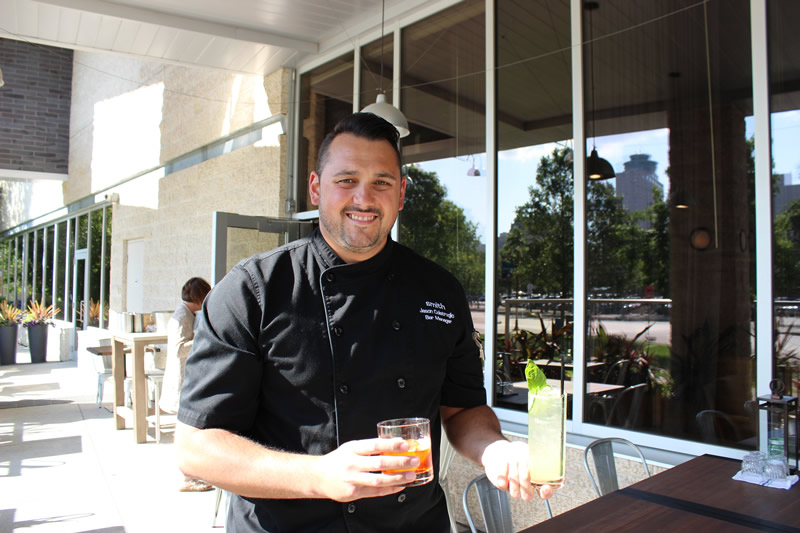 We finished off the afternoon with the Nitro Sorbet, which so seems like it shouldn't work, and yet does. It's a two-parter; the first is a dish featuring tequila-infused watermelon and lime sorbet, the second a 6 oz. flute of vanilla bean-infused brut. The options were to take a spoonful of the boozy sorbet then chase it with the brut, or simply to take them both down individually.

We tried both ways and we awarded three points on the fact that this could: a) work as a dessert b) work as a palate cleanser between courses c) who would have thought, vanilla beans and brut would work so well together? 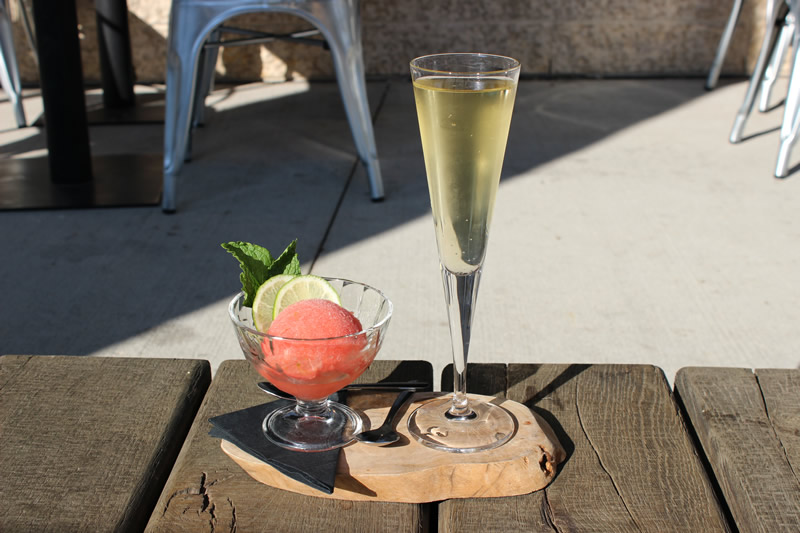 All in all with its peachy setting at The Forks, along with its cocktails, food, and west-facing locale, this is one patio sure to please the Winnipeg crowd.

Put it on your après-anything list, because ending your day here is going to make you feel good.