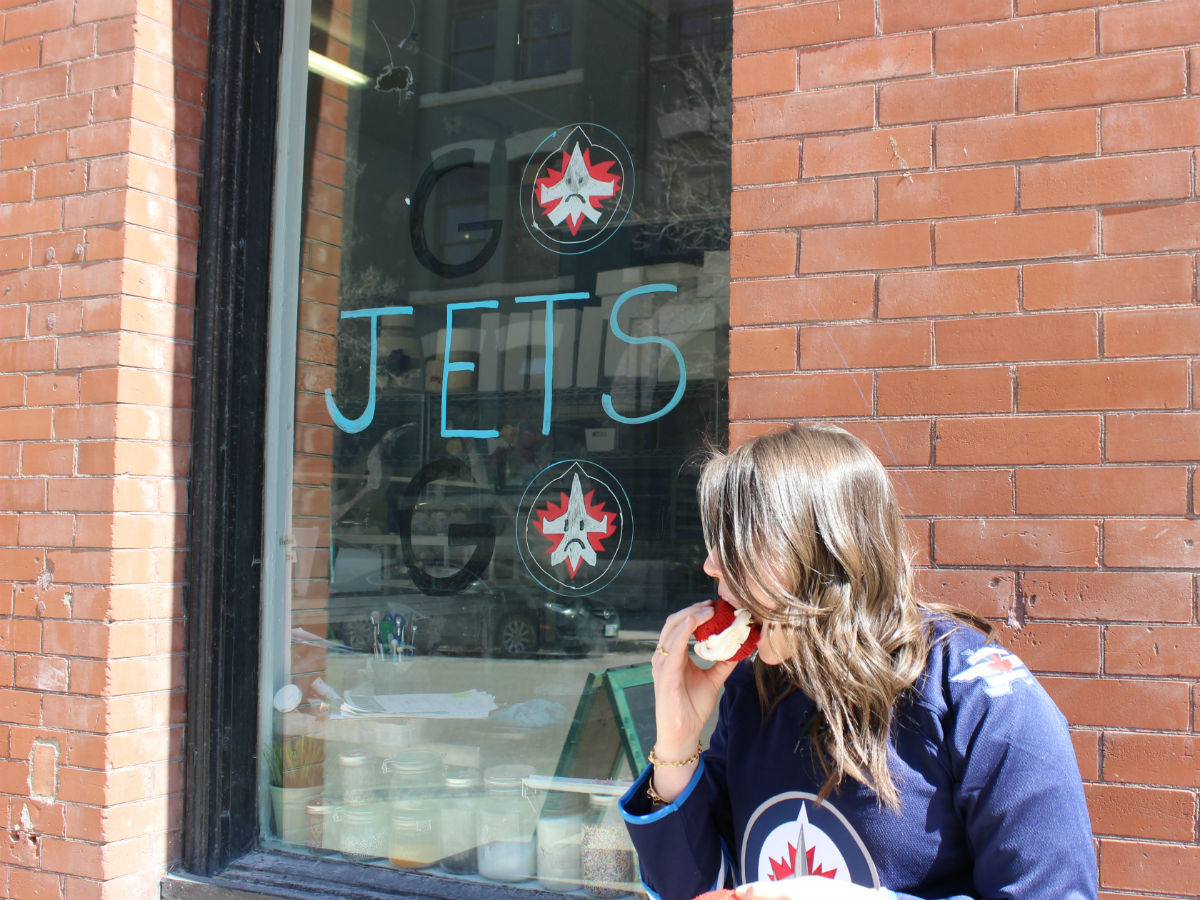 Releasing some post-game tension with this massive bite into a Cake-ology creation.

Delicious Winnipeg spots where you can go eat your feelings

Last night's loss -- and indeed all the losses this past week -- were tough to take. (Especially all those goals from Kesler, that bum).

While we can be happy to have made the playoffs, being the first team out is no fun, although huge props to all the fans at the MTS centre for the classy Go Jets Go send off.

But despite our never give in attitude, you must admit that there still is a bit of a void today, one that I'm going to recommend you fill with food.

Yes, it's certainly not the most productive thing to do, but later you can go work out your caloric intact (and your out-of-the-playoff aggression) at the gym.

So without further ado, here's some of the city's best places to go eat your feelings: 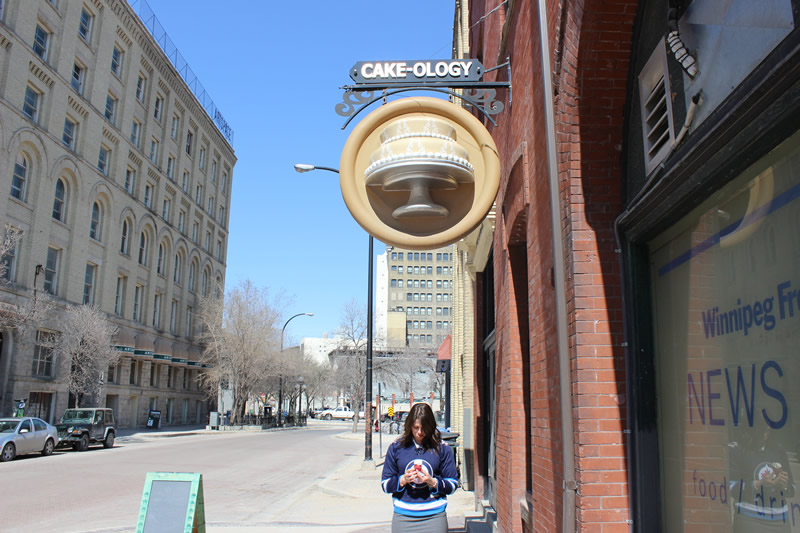 Let's start with some sugar shall we? Our office's proximity to Cake-ology (85 Arthur Street) has always been a blessing in times you need to indulge. There are a couple ladies in our office who had been assuring me for months that Cake-ology is the spot for anything to do with cakes -- especially cupcakes, with a weekly stop there part of their office ritual.

After seeing so many cupcakes come through our office's doors -- and thus, doing some serious sampling myself, I certainly agree because these pillowy, not too sweet and always fresh wonders are about as good as it gets -- and I'm not even that into sweets.

For starters, their cupcakes are so moist, while the ratio of cake to icing -- icing I might add that is nearly as good as Pavelec's final run-in of shutouts to clinch the playoff birth (especially their excellent buttercream) -- is spot on.

I was even shown a clever way to eat them today (as demonstrated by my co-worker Laura in the heading photo) whereby you turn your Cake-ology cupcake into a cupcake sandwich; a manoeuvre so clever that to execute it is better than scoring a shorthanded goal (which the Jets were so great at right up to the playoffs).

I tell you these cupcakes are so good that you'll forget Monday's overtime loss. 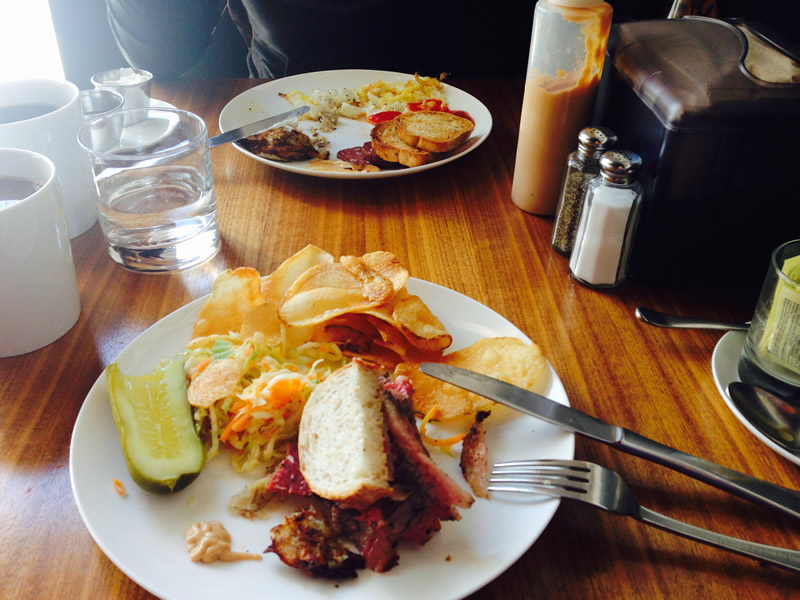 Next, for full on gluttony, BDI (766 Jubilee Avenue) has always been the place to be, with a higher count of ice cream concoctions than we saw for body checks in game one, which we all know was a lot. The standout for volume alone in this ridiculously creamy repertoire is the Sleeping Beauty, with a lineup of two ice cream sundaes topped with cherries and ungodly mounds of whip cream with a cherry on top, all stationed in half a pineapple as a vessel.

You'll feel like Garth from Wayne's World, when he was presented with that blue cocktail, when you are served the Sleeping Beauty. Its title is surely a foreshadowing of the food coma it will put you in if you finish. But at least, in said food coma, you'll be visited by lovely, sugary dreams where Corey Perry's deft stick handling will fade like unimportant childhood memories.

If sweets aren't your thing, then nothing says emotional eating like comfort food, which Winnipeg has in abundance. For something new to the scene, I highly recommend the smoked brisket stacked high on City Rye Bread at Sherbrook Street Delicatessen (102 Sherbrook Street) along with all their other Jewish-style comfort food.

Mac n' cheese will always be a winner, especially when you are feeling a bit like a loser. Our two favourites in the city come courtesy of Marion Street Eatery (393 Marion Street), whose Bothwell aged cheddar sauce with broccoli, bacon and a crunchy pretzel topping is sure to please, while the version at Deseo Bistro (696 Osborne Street) which features smoked paprika, manchego, chorizo and hand-rolled pasta is almost better than Teemu's rookie year -- who, while we're at it, we should forget was ever a Duck.

We love you Teemu.

But speaking of ducks, a lot of the local media was making it a thing to serve roast during the series, but I must say they were off the mark as there is no point trying to do your own when you could have just headed to either Sun Fortune or Evergreen Restaurant.

Evergreen (331 Pembina Hwy) is a no frills spot that has been specializing in Chinese barbecue for over 30 years. Many a Winnipeger holds their Peking duck as the best in the city and I'm inclined to agree. But I'm also quite partial to Sun Fortune (2077 Pembina Hwy) which for me is one of the best and most authentic Chinese spots in the city. 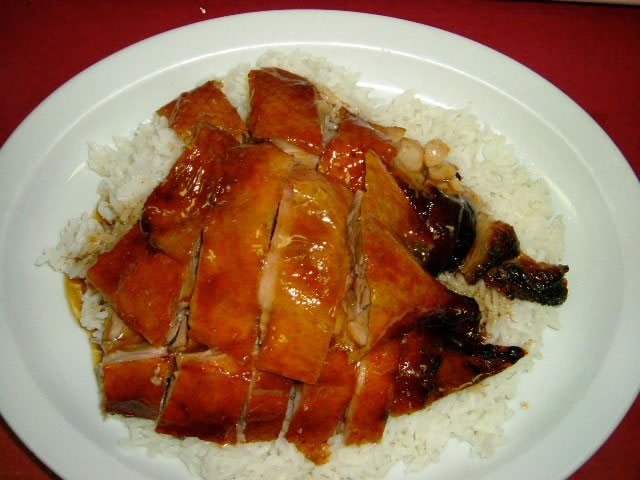 Their duck skin is so crispy and it makes for such a nice bite when you wrap it up in the thin pancakes with scallions and hoisin sauce, which is how the duck is first served. The second serving, featuring lettuce wraps with the tender meat stir-fried in soy, is also quite good. Plus, the large round tables and the bustling atmosphere at Sun Fortune is great for a group (make a reservation) where everyone can share their favourite moment from the season, all while tipping back Tsingtao beer and taking solace in the fact that we may have just lost to the 2015 Stanley Cup Champions.

As a bonus, if you don't want anyone to see your tears, you can hide them quite well over a steamy bowl of South East Asian soup from Lao Thai (763 Selkirk Ave). I like to opt for the souk gai, a traditional tangy clear Laotian soup that you can order so spicy that it will open your ducts more than the neutral zone during Monday night's action at the MTS Centre. In fact, all their soups will keep you wanting to come back for more, be it the tom yam, or their untraditional take on Chinese wonton, which my wife is absolutely obsessed with.

Plus the great thing about Laos Thai is the co-owner Somkid Boonthajit is a really nice guy, so if he sees you looking down from the Jets loss he'll be sure to cheer you up with some excellent Laotian hospitality.

What's your choice when it comes to eating your feelings?