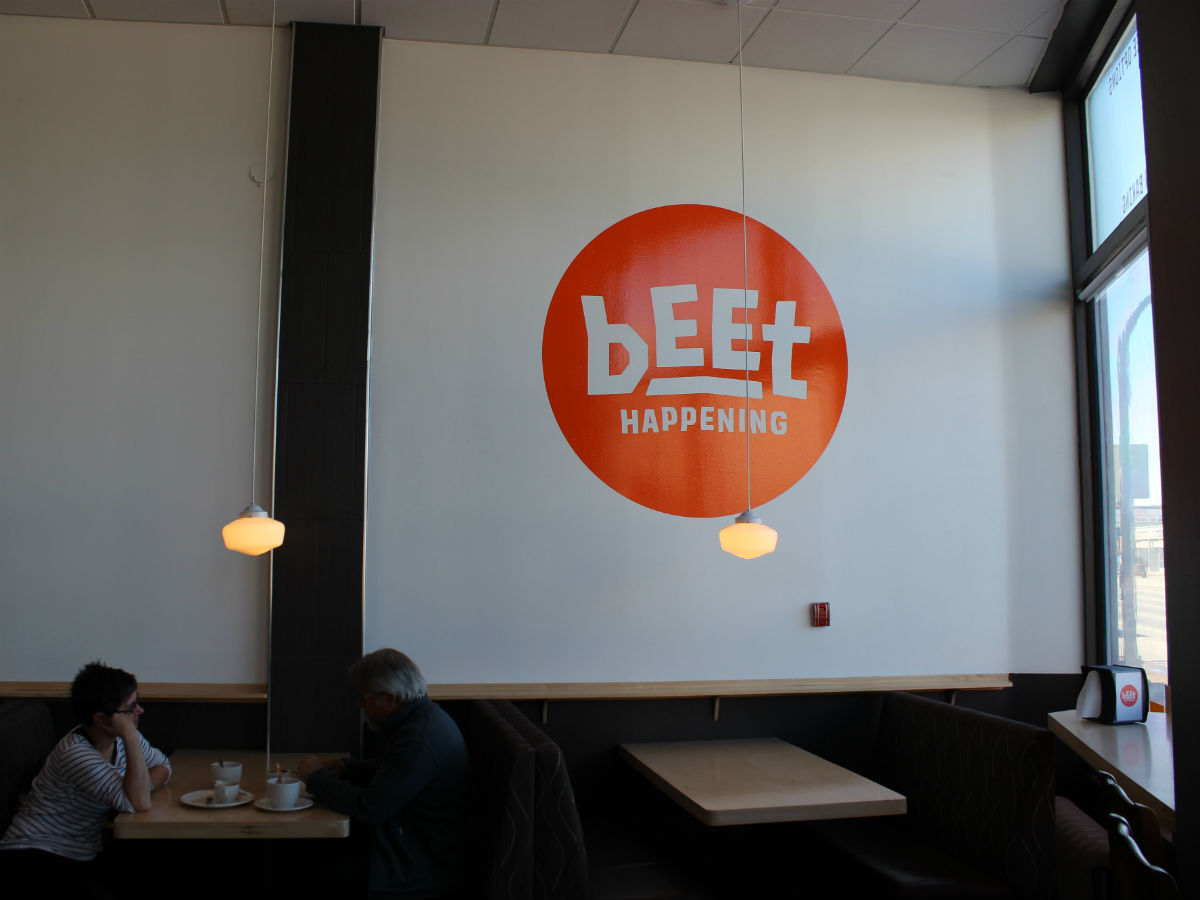 Apparently the name Beet Happening is misleading, or so I’m led to believe after people started asking me about the place.

Yes, there are beets on the menu, along with food that is vegan and gluten free. And, like its namesake vegetable, it is both humble and fashionable -- but it's not a vegetarian restaurant. In fact, all three delicious dishes I had featured meat.

The food certainly has a holistic, sourced from local land theme -- which makes it an interesting juxtaposition to the fare they serve at Health Sciences Centre, located right across the street on Notre Dame.

I joked with owner Justin Ludwar that he is doing the antithesis of hospital food -- which he liked -- although he was quick to add, "but let's not offend the hospital cooks." (He's an affable fellow). 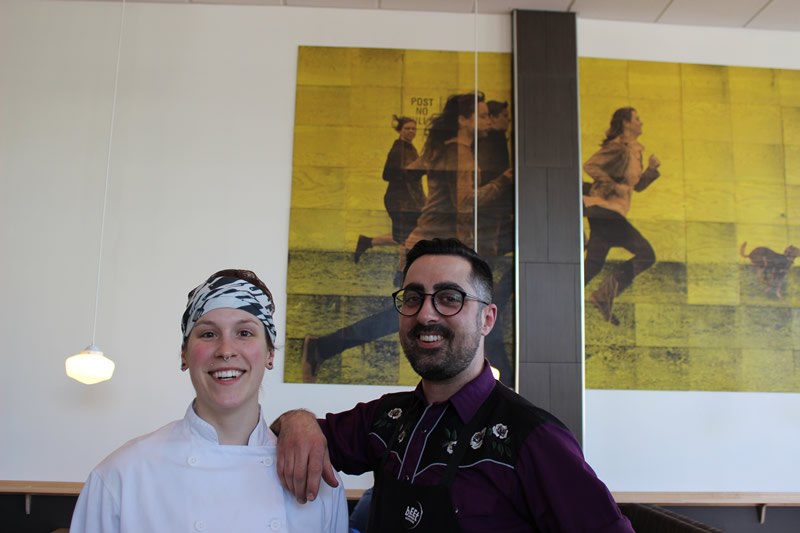 The dishes I had at Beet Happening were quite tasty (and nutritious) , especially the savoury bacon, beet and potato tartlet, whose almond and locally milled flour crust was excellent (crumbly, buttery, yummy).

“We worked quite a bit at that crust,” said Ludwar, who also does a bit of the cooking, but mainly leaves it up to head chef Virginia Jensen.

Justin was quite forthright that he doesn’t like to be referred to as a "chef" -- his primary background is as an artist who worked in the social services industry for 10 years -- but he does have cooking chops.

Long story short, his kitchen experience began as an assistant chef in Glasgow, Scotland, at an organic deli called Grassroots Cafe. He and his wife had moved to Scotland so she could do her masters, while Ludwar was working with behaviourally challenged kids at a school 40 minutes outside of the city. The commute was a bit much, the deli was close, and their chef was getting a bit burned-out, so Ludwar was hired and was soon creating a primarily raw, vegan menu that became quite popular. 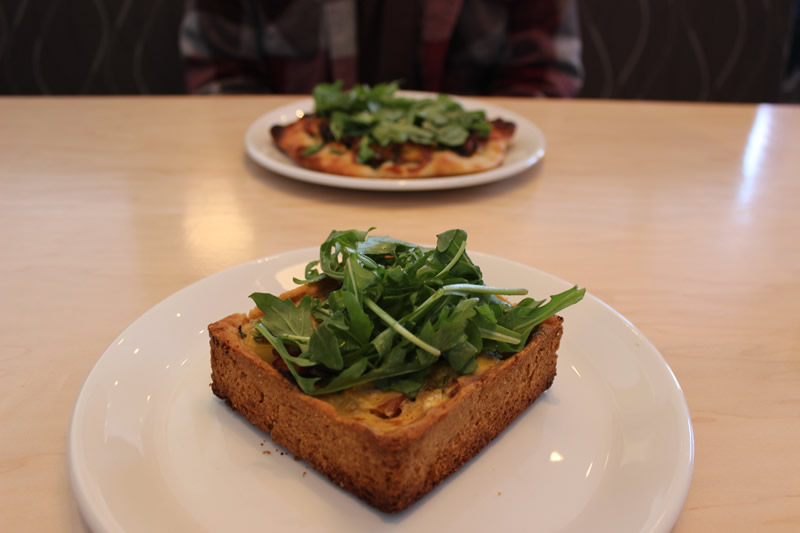 He's been back in Winnipeg for four years now, and has worked in a couple kitchens in the city while also taking business courses. He knew he eventually wanted to open a restaurant and after a while found this space, whose high ceilings and corner location have made for an ideal cafe location.

“I think my fine arts background gave me a bit of vision,” said Justin, when describing first seeing the bones of this space.

He also made the excellent choice of getting his friend and furniture designer Ben Borley to do all the custom wood work, along with local firm Urban Ink to do the graphic design, which features sketches of the menu items. The restaurant also has a show piece of art that was created by Ludwar's buddy, Toronto-based artist Nicholas Schick, who flew in the 70 panels for the piece in his carry-on bag.

Beet Happening is hip without being anywhere near pretentious; a nice mix of modern Scandinavian style with elements of whimsey, like the chipmunk water vessel that sits in the middle of the restaurant on an island featuring a curved wood screen that divides the space. 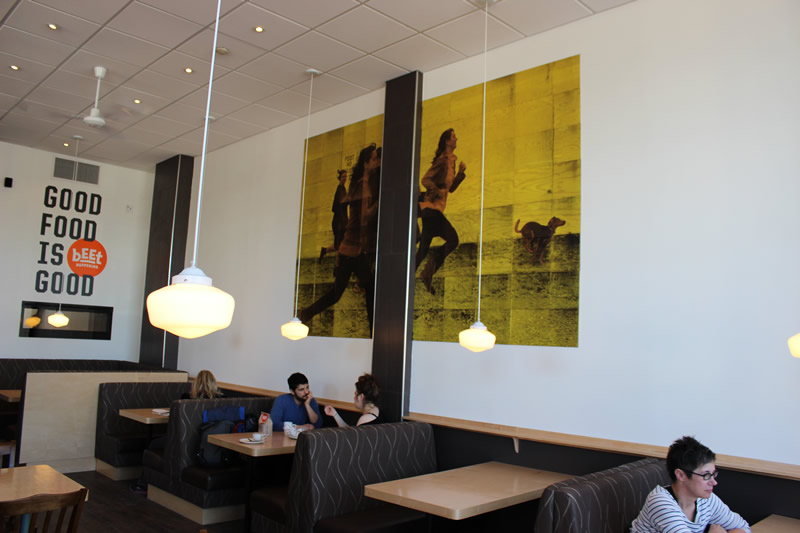 The spacious interior is charming, featuring a large piece of art by Nicholas Schick (PCG)

The room also has a take-out counter with a display case where you can spy the range of pizzettes (aka mini-pizzas, some of which are gluten-free) along with other items.

For breakfast, they feature sausage rolls (surely a nod to Scotland) along with other breakfasty rolls, along with breads, scones and yogurt parfaits. The coffee is locally roasted, fair trade organic (of course) from Peter Duluca, while the lunch menu features hearty soups, the aforementioned pizzettes and savoury tarts and an assortment of salads and other healthy items, all of which are changed up daily.

All the food can easily be made quickly to go, which only makes sense given the location across from the hospital.

They just opened on Wednesday -- after some lengthy delays to do with building code, which Ludwar is happy to have behind him -- so they do plan to have a more proper grand opening of sorts once all the systems are in place.

Beet Happening is located at 818 Notre Dame Avenue and is open Monday to Friday, from 7 a.m. to 3 p.m.