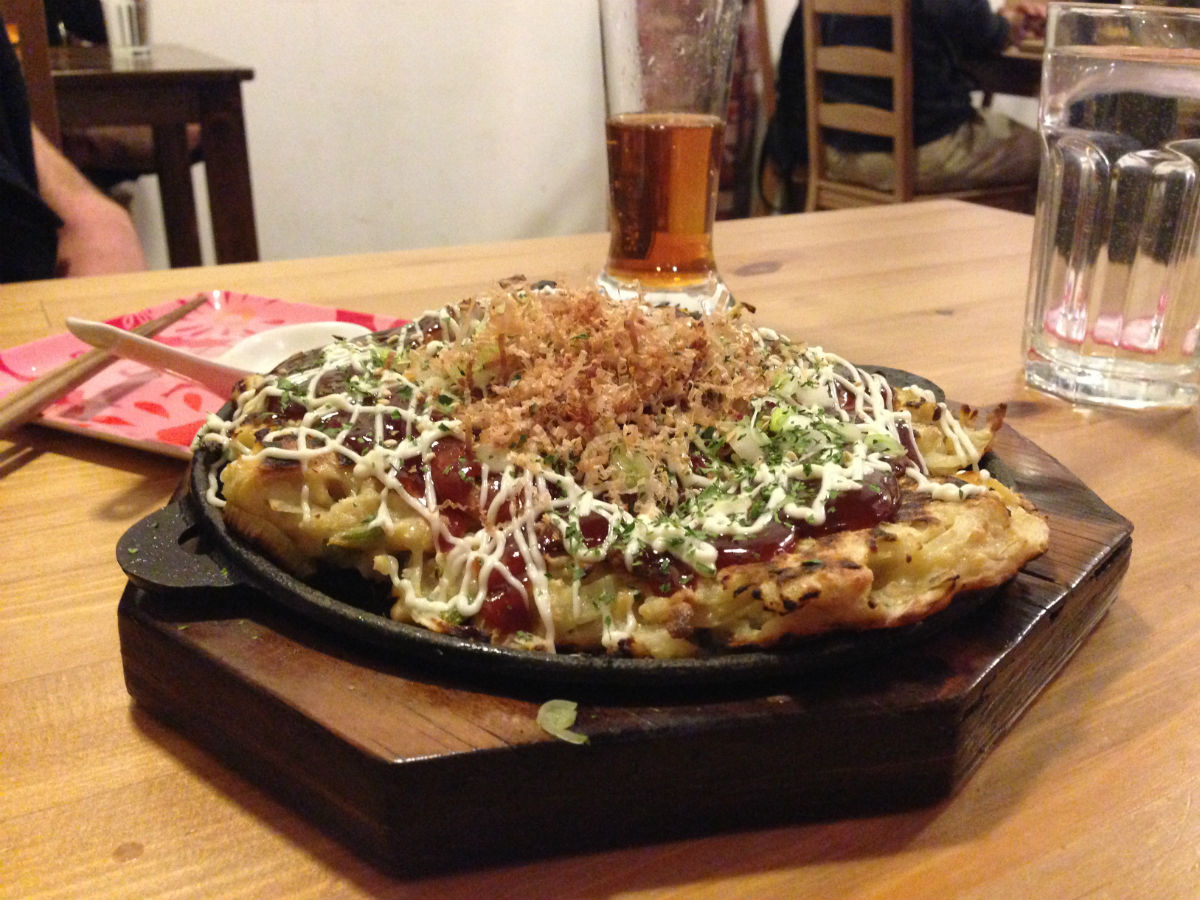 Okonomiyaki at Dwarf no Cachette (PCG)

If you are looking to immerse yourself in some whimsy, while eating some damn tasty Japanese food, find the dwarf in St. Boniface (which, if my translation is correct, is a pretty decent joke).

Dwarf no Cachette opened up in St. Boniface about seven months ago, and we were pleased as punch to finally get to try it this week to help satiate our cravings for ramen, izakaya and yōshoku- style food.

Izakaya is generally a Japanese watering hole where you'd go to drink while snacking on small plates; yōshoku refers to Western-style dishes that have been adopted and made more Japanese (think fried cutlets, omelettes or burger patties in interesting sauces), while ramen -- well, we all know ramen, although the traditional Japanese ramen house concept has yet to take off in Winnipeg as it has in other Canadian cities like Vancouver and Toronto. 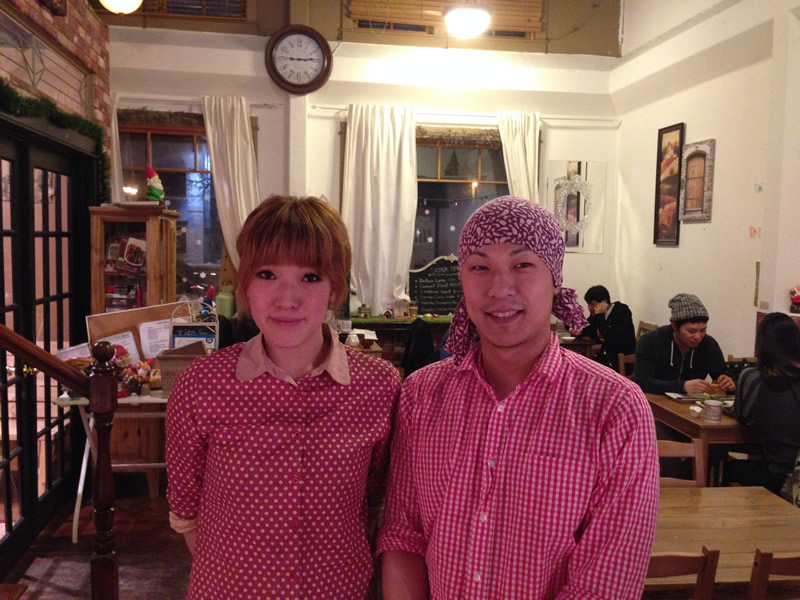 My first experience of all these foods was in Tokyo, where Dwarf no Cachette's owners, Yasuko and Takekuni Akimoto are from. Long story short, Yasuko moved to Winnipeg 15 years ago to take linguistics at University of Manitoba, and Takekuni moved here 10 years ago and used to have a sushi shop called Sushi King. They met here through a mutual friend. They both are in their early 30s, and bless their hearts for converting the former home of Step ‘N Out (which was already a pretty unique room) into an adorable little slice of Tokyo.

My wife and I spent a couple weeks in Tokyo, where my cousin Neal and his wife Yoshie first introduced us to izakaya in Kichijoji. Ramen was of course everywhere, and from that trip forward we've been hooked. We've also lived in Vancouver for six years where real Japanese cuisine (not just sushi) was a once-a week-thing where the rooms filled with young Japanese students brought you right back to Japan. This is pretty much what is going on at Dwarf. 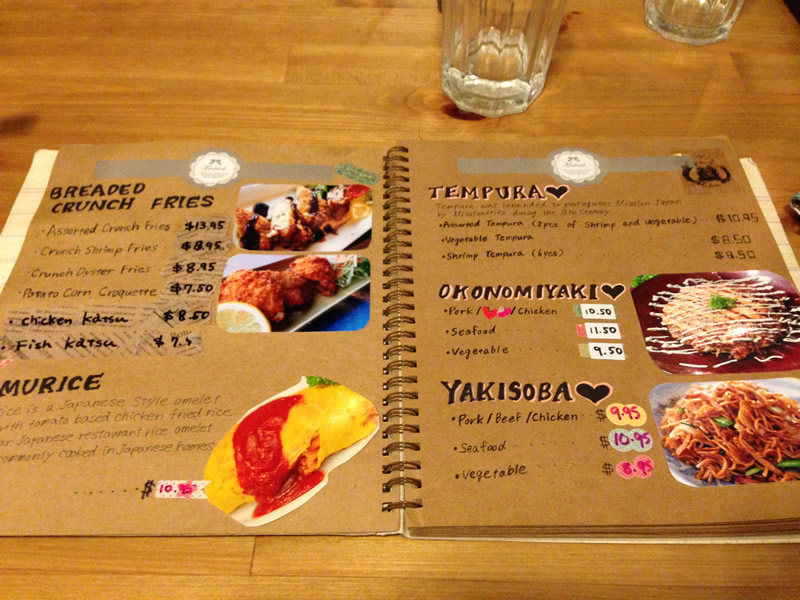 The hand-crafted menu is beyond adorable (PCG)

"We wanted to open a spot for the international students and to bring some kawaii to Winnipeg," said Yasuko, the incredibly charming owner who not only has developed the recipes but also designs many of the cutesy items that are also on sale inside the restaurant (the second floor has a full-on kawaii gift shop).

Kawaii refers to elements of cuteness in Japanese culture (think Hello Kitty and cartoonish things with big eyes), and Dwarf no Cachette has that in spades. The whole room is decorated with gnomes, mushrooms, knick-knacks, folksy paintings, and just about the most adorable scrapbook style menus you've ever seen, which Yasuko of course made. (There was also a "Sweet Lolita" party going on upstairs, a concept that I'll leave it up to Wikipedia to explain. Just let it be known that this made our experience even more authentic). 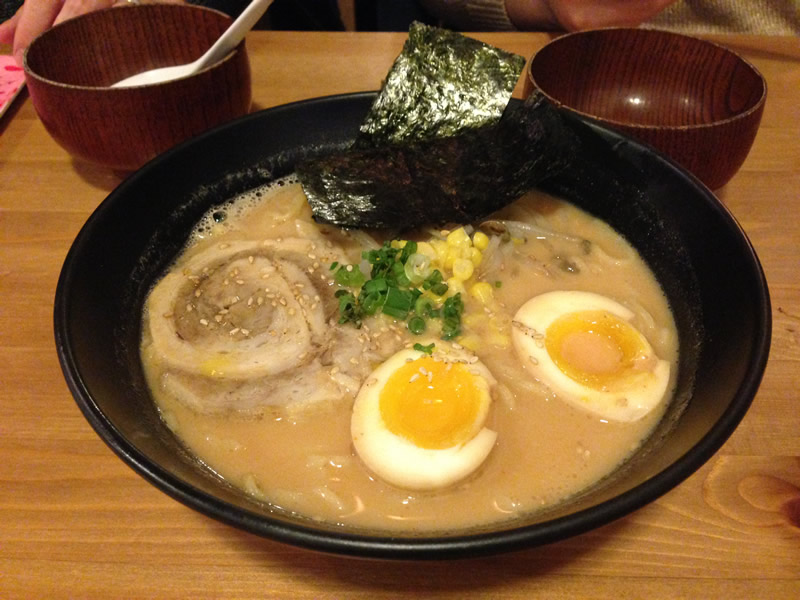 Now let's get to the food, which is great. To start, their spicy miso ramen is the best one I've had in Winnipeg: the broth, made from a rich, salty pork and chicken stock was right up there to the high standards you'd get in Vancouver's West End, while the noodles were toothy and the egg yolks barely set. It was spicy but not overpowering, and I'll be coming back time and time again for lunch alone just for this dish.

The takoyaki ($8.50) and okonomiyaki ($11.50), which are both classic Japanese street food dishes that are on most izakaya menus, were spot on.

The takoyaki (small balls made of wheat flour filled with diced octopus topped with a sweet/salty sauce, almost like teriyaki, along with Japanese mayo and bonito), was as you wanted, with a slightly crunchy exterior and gooey centre punctuated by tender pieces of tentacle. The okonomiyaki (a savoury pancake, which is pictured at the top of the article), hit all the right points with tender shrimp, diced onion and cabbage throughout, while the pancake had a nice crispy bottom for texture. 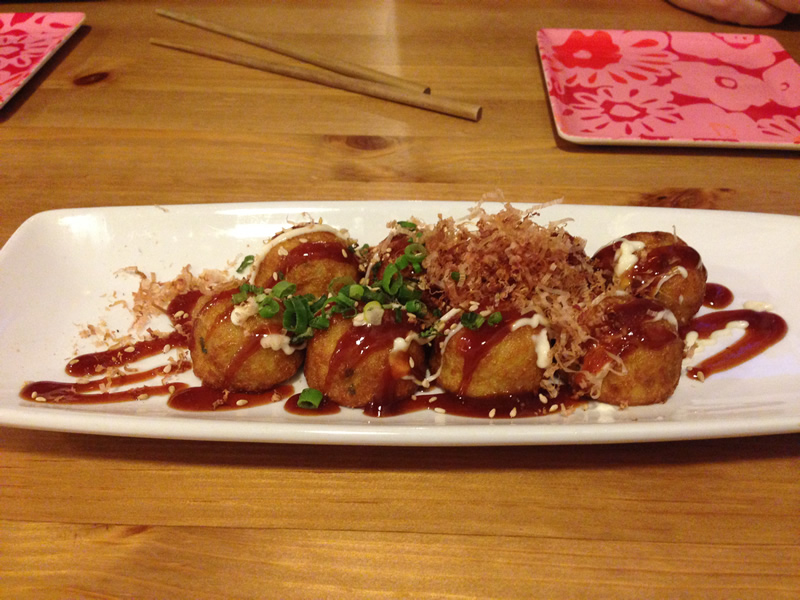 The takoyaki at Dwarf no Cachette (PCG)

My two dining companions and I (including my wife and our friend who we used to work with in the food industry in Vancouver -- who also happened to cook at Step ‘N Out 10 years ago, the change in setting he said was quite surreal) also hit two items off the March specials board, the best of which was a fried udon dish with a flavourful silky sauce.

We also finished off the meal with the gigantic Choco Banana Oreo parfait ($6.95), which we had to order after seeing three of them being delivered to the large table of students beside us.

In fact, we had a lot of plate envy toward what a lot of the young regulars were ordering, from the crunch fries, to the curry rice, to the burgers which looked awesome. This not only gave us an excuse to go back soon, but was also reassuring in how a very unique concept for Winnipeg is demonstrating staying power through a young customer base. 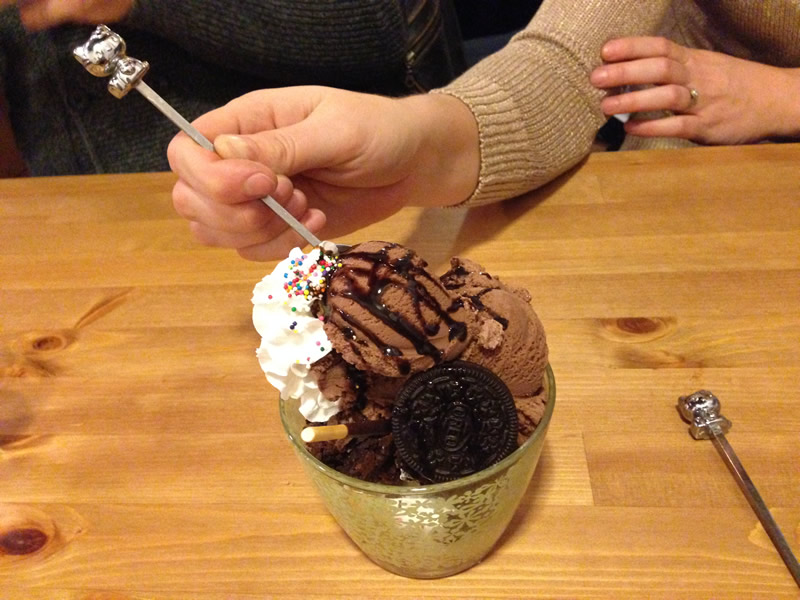 I'd asked Yasuko about this and she said she's also pleasantly surprised how many regulars she has from the surrounding St. Boniface neighbourhoods (whom she gets to practice her french with), along with the international students and expats.

Service was a touch slow, but we attributed that to there being the large group upstairs (the previously mentioned Sweet Lolita club) and a full dining room when we arrived. But when there is so much going on -- including the obvious game of finding the dwarfs -- we weren't too fussed.

Dwarf no Cachette is licensed and located at 157 Provencher Blvd and is open six days a week (not Tuesdays) for lunch and dinner.