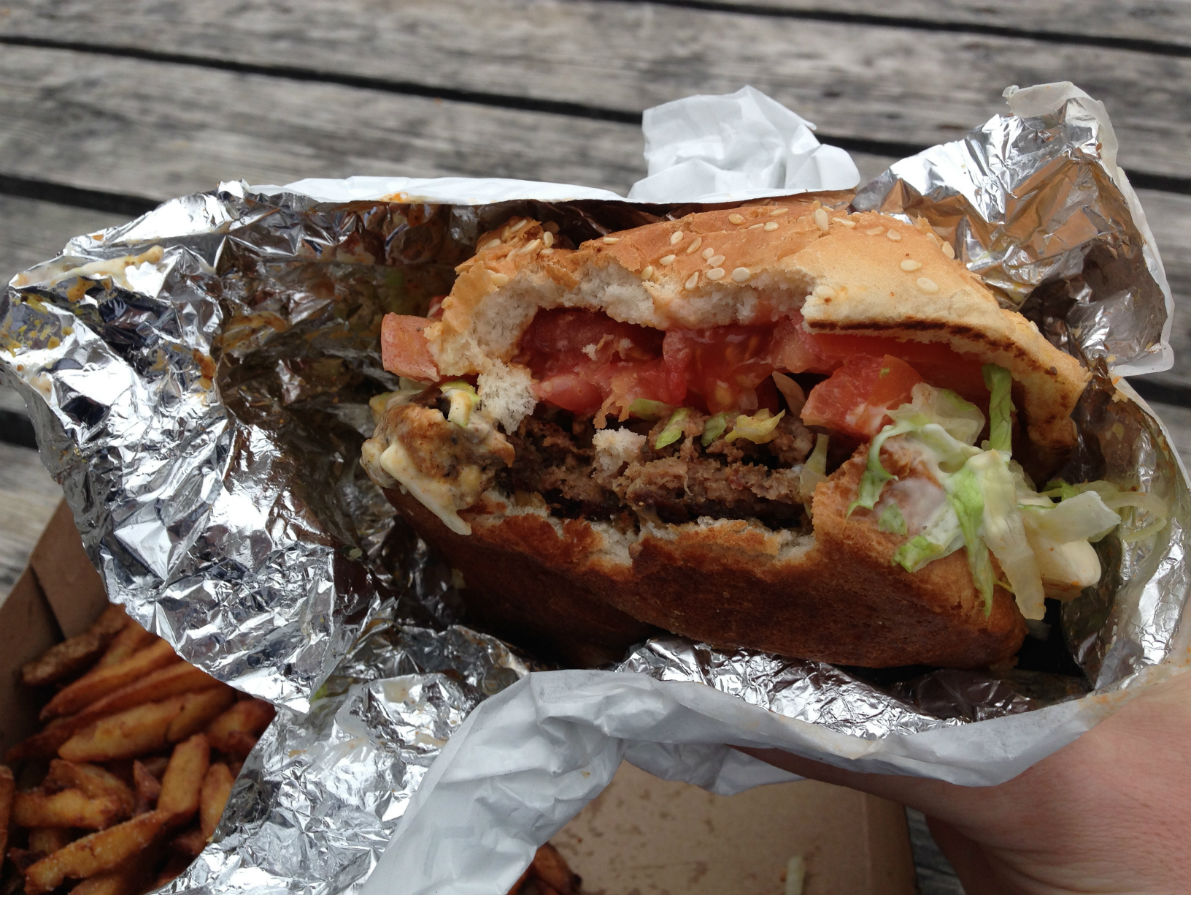 The VJ's Special at VJ's Drive Inn is not just special. It's splendid.

It's the sort of sloppy, saucy, unpretentious old-school burger that you'd imagine Anthony Bourdain would make a point of hitting up (if he were ever to do a Winnipeg episode) before heading to the airport to film another episode of The Layover.

Or at least that is what I'd like to think.

Because this is one establishment I will continually go back to time and time again in this city, and I normally count myself as a burger connoisseur who more often than not grinds his own locally-raised, grass-fed beef at home when it comes to making patties.

Oh but V.J.'s, just driving by your little shack on Main St. at night I feel as though you are calling out to me as if to say, "Hey there, I know it's almost midnight, but couldn't you go for a crispy patty, all slathered down to a soppy mess with our chili and ungodly amounts of mayo?" To which your stomach may reply, "Yes, go on." Along with, "... And don't sell yourself short V.J.'s because you didn't mention that fat pickle, diced onion and shredded lettuce which tops off that masterpiece." 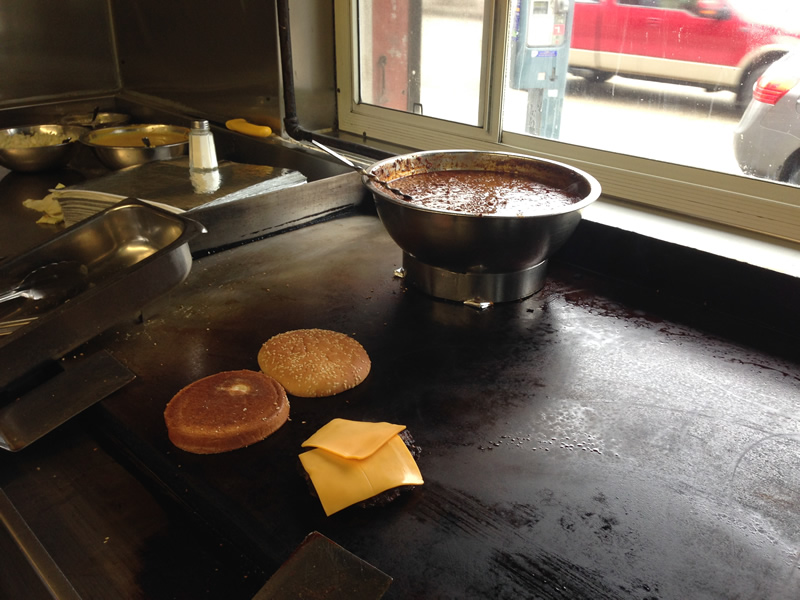 There's something about that simple chili, and this is the only time you'll catch me eating a cheese slice (PCG)

And that's what's all about, that combination of a pressed-patty cooked hard on the flat top that makes it crispy on the outside, while still juicy in the middle. (If you get there in the morning before it gets busy you'll have the chance to see them press the balls of beef down into thin patties in the back. It's a thing of beauty -- they press 50 pounds a day). The patty is then topped with a mild chili (no cumin, but some cinnamon they tell me), while the bun is soft and absorbs about as much saucy goodness as it can handle.

This style of burger (with chili on top) is referred to around these parts as a "fat boy" and they can be found all over the place because Winnipeg does old-school burgers in spades.

As the comment section will probably attest, you are generally either pro White Top, Dairy Whip, Mrs. Mike's, Daly Burger or V.J.'s when it comes to a rough and rumble burger. My boss for one, when I told her I was writing about VJ's proclaimed that, "the Boss Burger at Daly's is the best burger!" While others in our office trumpeted their love for George's and Sonya's and Blondie's and Red Top, so you can see where this is going. 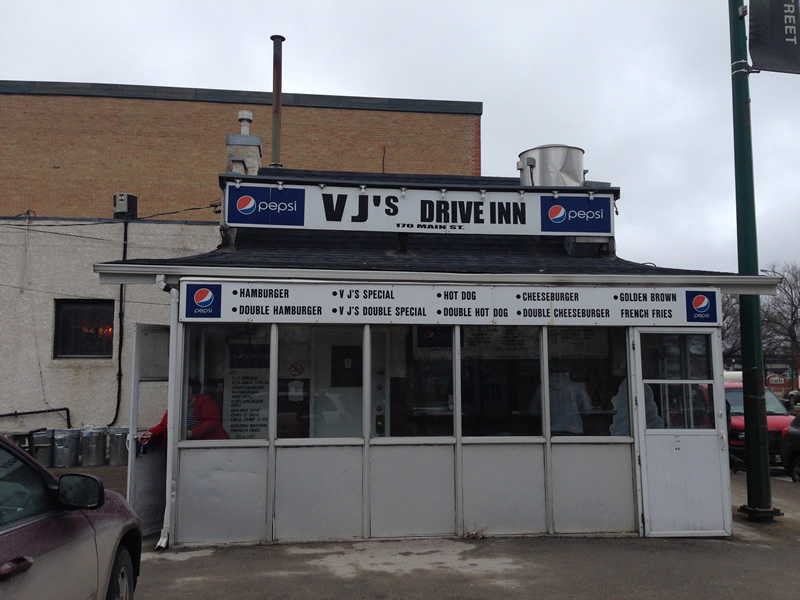 Not one of Winnipeg's architectural marvels, but an iconic institution nonetheless (PCG)

These burger joint choices, more often than not, are usually based on what neighbourhood you grew up in: Winnipeggers can be a fiercely territorial bunch when it comes to their eating habits, although others will proudly proclaim how they will drive across town to get their favourite version of a fat boy.

Now I'm not from Winnipeg, so I have no problem claiming VJ's is my top number, but please feel free to tell me I'm wrong. (I also dig NuBurger -- who set the highest beef standards for a fast(ish) burger by sourcing from All Natural Meats in Carman, who take farm-to-table to a whole new level by processing their own local beef in their very own abattoir).

But back to V.J.'s. The fries too are just about the best in the city (along with White Top), just make sure you order them extra crispy to give a nice crunchy outside while still yielding a fluffy potato interior. 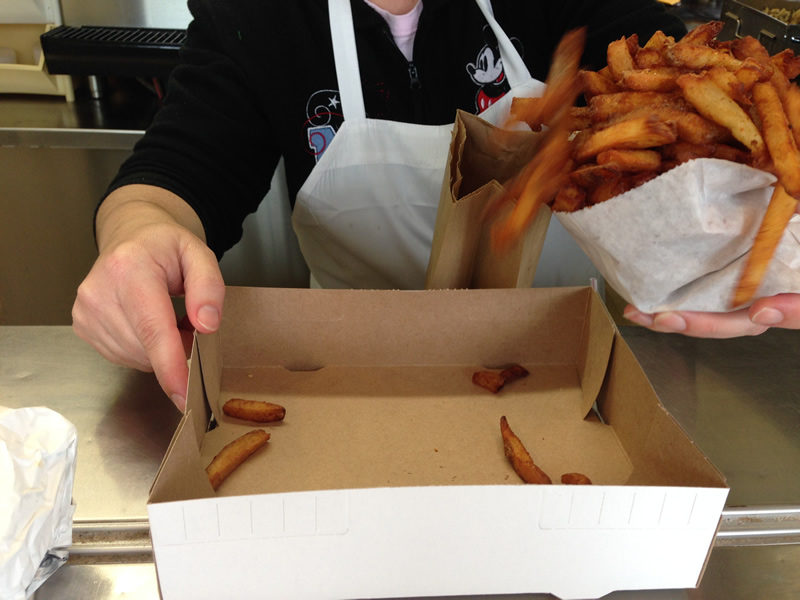 And get your order in a box. This way, you get the classic near-aggressive show of having your baggie of fries presented at eye level before being ceremoniously dumped into the box (which is my favourite part).

My final pointer would be to get extra napkins, then take a seat outside on the benches and find yourself amongst a democratic throng of people (who if it is winter, will be in their cars greasing up those steering wheels). You'll see suits, sweatpants, hipsters and the old and young, all parked in everything from Escalades, to Dodge work trucks to, everyone's favourite old man car, the Ford Taurus.

Such is the power of a good messy burger.