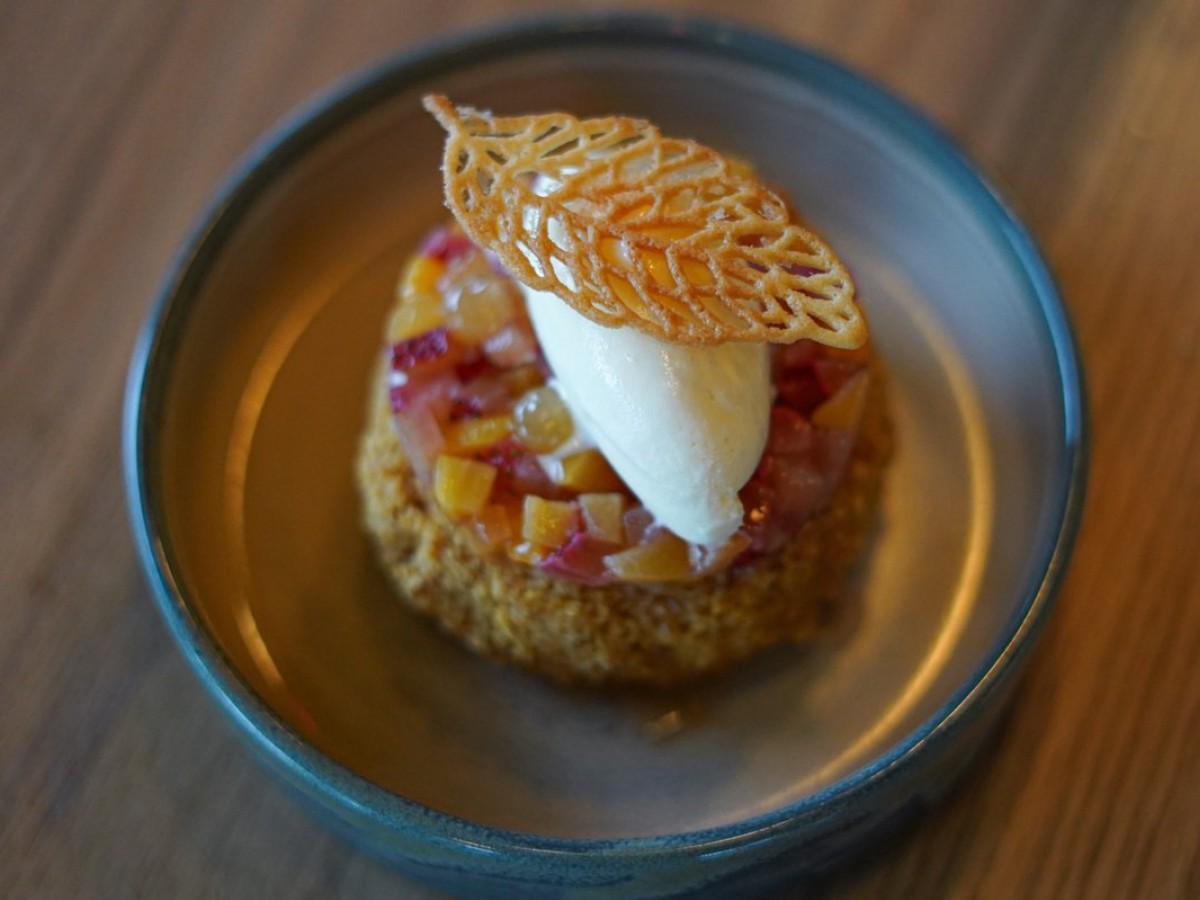 Fun food festivals, brunch on ice, a Japanese ghost kitchen and a spot to Gather within The Leaf are just a few of our New & Notable things to taste this winter.

Our first new & notable for the year is serving up some food festivals (so many in January; so much for resolutions!); a brand-new Japanese ghost kitchen; the most foliage-flaunting dining room the city has seen; brunch on ice, and a new downtown taproom that’s home to one of our favourite breweries.

The city’s newest ghost kitchen concept comes courtesy of the Kims–Dr. Dave Kim and his brother-in-law Nate Kim, along with cousin chef Paul Kim. Dave and Nate moved to Canada 13 years ago from Seoul, while cousin Paul, whose mother is Japanese, came here four years ago from Osaka after spending his youth in Busan. Together, these three are bringing some serious katsu to the city, using local, never-frozen, thicker cuts of pork (cut from tenderloin that is dry-brined beforehand) and coated in the Kims’ very own panko crumbs. They make this panko using local white bread dried overnight then processed through a panko-making machine that they imported from Japan.

“What the machine does is create that traditional Japanese tonkatsu, where you want the big, fluffy, moist pieces of bread crumb,” said Dave, who is also a family doctor in his first year of residency. “That's something not available on the market right now [here]. You can only get like the dry panko and the chunks are very, very small–you don't get that flakiness and the crisp that we want.”

The Kims have been experimenting with this ultra-crispy katsu for a few years, but it wasn’t until mid-December that they brought it to market. On top of traditional pork katsu, the menu features other katsu like chicken, pork and mozzarella, tofu, and prawns, along with platters featuring all the cuts. All dishes come with traditional sides like white rice, Japanese cabbage salad, and tartare and tonkatsu sauce.

Winnipeg’s hottest new world-class attraction, The Leaf, is also home to its hottest new restaurant. Since opening in December, fully reserved dinner service at Gather has been the norm, while lunch service (which just began last week), is often fully booked, too. But don’t worry, they always leave some room for walk-ins should you be looking to add a culinary experience before or after you take in the incredible biomes.

Chef Mike DeGroot’s menu–outstanding for those cutting out gluten–spins local takes on global cuisine and has a little bit for everyone from large mains, to share plates. Plus, there are many local beers and plenty of craft cocktails, too (the Gather Caesar is a can’t-miss for Caesar fans and features a gazpacho’s worth of herbs and veg in the clamato, along with bacon-infused vodka and accoutrement that includes smoked cheese, charcuterie, charred bread and a delicious rim pasted to the glass via a housemade barbecue sauce).

For lunch, the gluten-free caraway-cured, smoked Arctic char–artfully plated on a disc of potato salad with juniper sauerkraut, rye, and preserved mustard seeds–gets full marks, as does the rich, hand-cut fettuccini with duck confit, duck sausage and moliterno pecorino in a Boursin sauce.

Dinner brings a number of seafood dishes, like charred octopus with tomato jam and pickled zucchini, seared scallops with risotto, and mussels in tomato broth (all of which are gluten-free… if you neglect the naan with the mussels) along with a number of braises like a Persian-style lamb shank and beef short rib with a root beer demi-glace (again, both GF for the win!).

While dining, should the attractive room and its sleek open kitchen not be enough for visuals, you can look south into the Tropical Biome. Come summer, the outdoor patio will be open via the west side of the restaurant. Given we plan on spending as much time in the Tropical Biome this winter as possible (it’s tranquil and stunning, and the humidity and tropical smells are what we crave) we will work our way through the Gather’s menu, as everything so far has been lovely.

One of our favourite breweries now officially has a room/facility to call all its own–and right downtown to boot! After years of brewing within Stone Angel Brewing and then Torque Brewing (where they will continue to brew their main titles), Devil May Care (DMC) owners Colin Koop and Steve Gauthier opened up their own HQ in late December on the corner of Fort and York.

Along with a large lineup of DMC brews (most available in 10oz and 16oz format; around six beers or so are brewed right on site), the room features plenty of seating–including tall tabletops, picnic bench-style seating and window seats, plus plenty of cold, colourful cans (the designs are always mint) for purchase and a couple of large murals.

Plus: location, location, location! The taproom is just a few blocks down Fort Street from the arena, and is right by The Forks, Portage and Main, a number of live music venues and The Fort Garry Hotel, making it an excellent spot to pre-or-post game/concert/event.

Taproom hours are Monday to Wednesday, noon to 9 p.m., Thursday to Saturday from noon to 11 p.m., and Sunday from noon to 7 p.m. Open until 11 p.m. during all Jets’ evening games. 155-A Fort Street (on the corner of York Avenue).

The Exchange District also saw a fab new opening in December, this one just up from Portage and Main. Rosé Coffee and Wine runs like a café during the day, with a selection of pastries and coffee drinks, before moving to “wine & bites” service for the evening with a lovely selection of small plates (including salads), open-faced toast dishes (there’s a whole tartines section on the menu), cheese and charcuterie boards, and oysters on the half shell.

Fireside Design created the pink-toned room for owner Q Nguyen, which they describe as “a love letter to our theatre district and its dramatic vaudeville past,” and it is every bit as chic and stylish as you would expect from Winnipeg’s cherished designed duo. The room’s central bar is striking and is surrounded by two and four-top tables serviced by plush chairs, while pink and red drapes and the coolest little sickle-shaped booths round out the inviting interior (don’t even get us started on how cool the gold bird taps are in the bathroom). The glassware rocks, as do the large ice buckets that they’ll bring to your table to make sure your bottle of rosé or sparkling stays chill. A great new room to see and be seen in.

While  RAW:almond sold out its dinner service tickets in a day, you can still dine on ice this winter within architect Joe Kalturnyk and Jon Reid’s incredible new temporary restaurant structure on the frozen Assiniboine.

On weekends, RAW:almond brunch is back from 10 a.m. to 2 p.m., with two of the city’s best providing the goods.Hoagie Boyz–our new favourite sub spot–will be on Feb 4-5, with Crumb Queen (aka Cloe Wiebe)–the producer of everyone’s favourite crueller (plus so many other kinds of baked goods and breads) taking service on the Jan 28-29, and Feb 11-12.

Both of these beloved businesses have a past with deer + almond (whose founder/executive chef Mandel Hitzer is co-founder of RAW) as Wiebe used to the be the pastry chef at d + a, while two of the Hoagie Boyz (chefs Stefan Lytwyn and Jesse Angers) worked in the restaurant kitchen, with Lytwyn the former sous chef.

The brunch menu will be served à la carte and is open first-come, first-served with no reservations. Who knows what tasty dishes these peeps will come up with? (menus not available yet). Added bonus: Enjoy this special brunch in your skates! We’ve done past RAW:almond brunches when Adam Donnelly and Talia Syrie were running them, and we tell you, there’s no other experience quite as Canadian as skating up to the structure and savouring brunch while you’re still laced up.

Try out as many as you can this week then go vote online here.

Plenty of the joints competing in Fried Chicken Fest are also competing in Veg Out, which this year has 29+ restaurants set to compete by bringing their best vegan dish forward. Full dish descriptions have yet to be released, but you can expect plenty of all-plant-based dishes that go far beyond simply using Beyond Meats. Along with spots that we frequently celebrate for their veg-forward dishes—here’s looking at you The Roost, Roughage, Thyme Café, and Dug & Betty’s–you’ll also find some interesting surprise entries, including bakeries like Eiffel Tower Pastry Shop, Eadha Bread and Hildegard’s Bakery that will surely rise to the occasion.

Select proceeds from the event will support Free From Farm Sanctuary, with voting running throughout the event.

This province produces a lot of potatoes and you can explore this vegetable’s versatility during Peak of the Market’s flagship food contest. Currently, there are more than 60 Winnipeg restaurants signed up to showcase their best when it comes to russets, red bless, Yukon Golds, fingerlings, and perhaps even some creamers and Kennebecs (the French fry potato of choice). You’ll find latkes, pizza, soups, croquettes, curries, perogies, and all manner of baked and fried entries here, along with info on how to vote for your top tubers.

…. And if Potato Week wasn’t enough starch for ya, we still have the annual La Poutine Week to look forward to, in February. This national event always has a large number of local entries, so stay tuned here for the list of participating restaurants and to discover the world of gravy and curd.