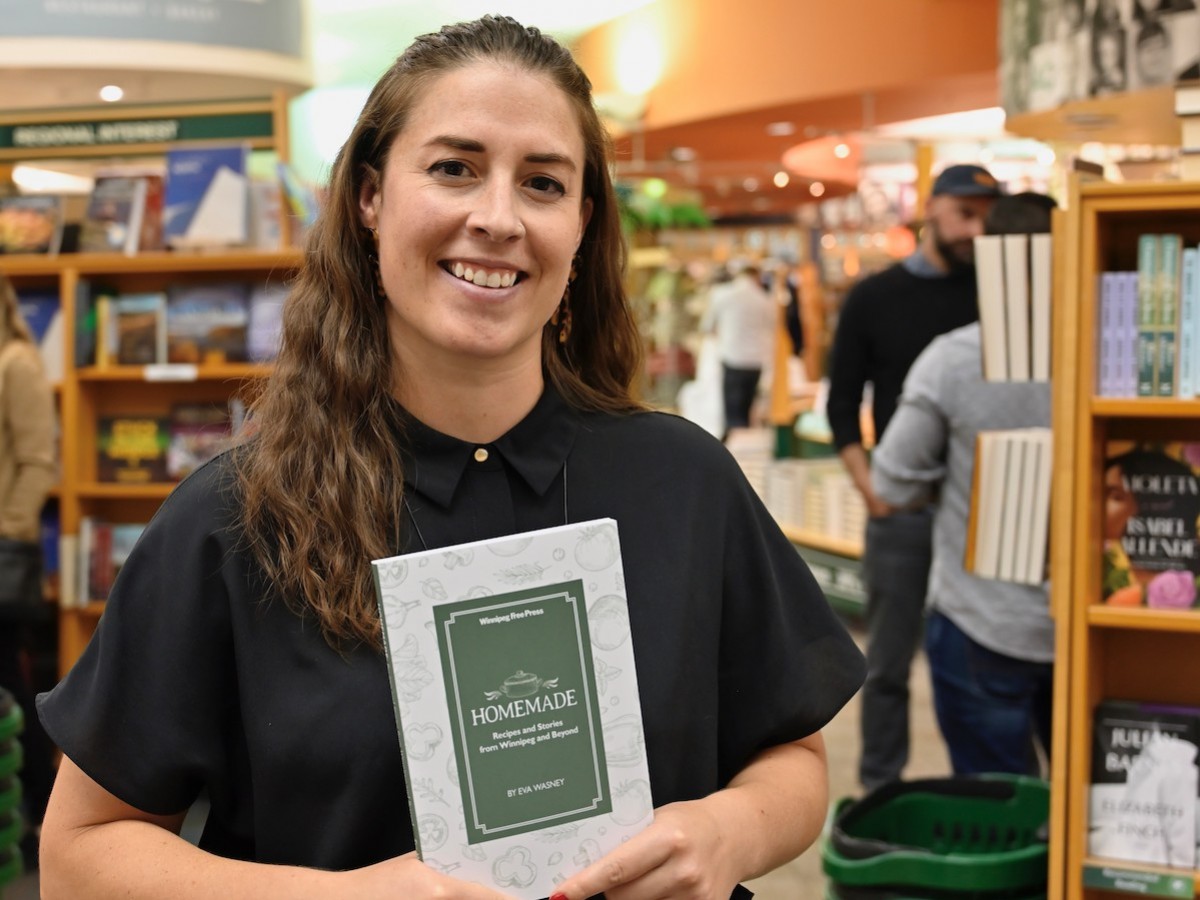 The Winnipeg Free Press is celebrating 150 years and to mark the occasion it has released a cookbook featuring 150 locally inspired and sourced recipes.

Homemade: Recipes and Stories from Winnipeg and Beyond is by the newspaper's Food, Arts, and Culture reporter, Eva Wasney, who had the Herculean epicurean task of reviewing hundreds of recipes before compiling all these dishes and stories to keep with the publication's "long tradition of recipe-sharing and home-cooking journalism." The result, to quote again from the book, "is a potluck of epic proportions and an appetizing look at Manitoba food and media history."

We for one, can't wait to get our hands on a copy (which you can find in the link above and here at McNally Robinson), while in the meantime you can pair this new publication with a seat at The Free Press Fall Supper on October 1, where chef Paul Ormond will craft a multi-course meal inspired by the book.

Below, Wasney dishes on so many sweet and savoury details–like the inspiration behind Homemade, where she likes to eat in Winnipeg, what you can expect at the Fall Supper and of course—this being Winnipeg—the possible return of jellied salads!

What first interested you in food and food journalism?

I’ve loved cooking (and, let’s be honest, eating) for as long as I can remember. My family is full of talented home cooks and experimenting in the kitchen has always been a fun pastime.

When I started my journalism career, I was mostly reporting on hard news. Since joining the arts and culture department at the Free Press I’ve been able to branch out and explore local food in some really interesting ways — from the restaurant industry to agriculture to food security and home cooking.

Where did the idea for a 150-recipe cookbook to celebrate 150 years of the FreeP come from?

I’m a big fan of community cookbooks and the way they capture a certain moment in time. I thought it would be neat to make a Manitoba-wide cookbook to mark the paper’s 150th anniversary. The Free Press has been publishing recipes since the late 1800s and has developed its own community of food enthusiasts through various cooking columns over the years. Homemade: Recipes and Stories from Winnipeg and Beyond brings that history to life and offers readers a chance to connect with their neighbours through recipes.

When did you start the project (as this must have took forever)?

The timeline was actually pretty short. All told, I had about eight months to collect the recipes, write the food stories that start each chapter and investigate the paper’s history of home cooking content. Not to mention all the editing, photography and layout work that had to happen. Thankfully, I had help from colleagues who are equally accustomed to tight deadlines.

How many people sent in recipes, and what was the most surprising/interesting thing about the recipe submissions?

We had about 250 people submit more than 400 recipes. I truly wasn’t prepared for the number of Jell-O salads we received. There were at least a dozen submissions for sweet and savoury gelatin-based dishes. It’s an ingredient that was all the rage in the mid-20th century but has fallen out of fashion, so I think it’s a case of nostalgia rather than a Jell-O resurgence. The majority of recipes in the cookbook stem from beloved family traditions that have been passed down from generation to generation—this was a very specific retro example of that.

How approachable are the recipes (please tell us there’s some Mennonite-inspired molecular gastronomy)? And how many have you tried to make at home?

This whole project is about home cooking and, by virtue of that, the recipes are all very approachable. It’s food people make for weeknight meals or family gatherings, so there isn’t a lot of fancy ingredients or complicated cooking techniques.

Because of the tight timeline, I couldn’t do a lot of recipe testing. I did, however, get to taste a bunch of the dishes while interviewing folks in their kitchens—that was a major highlight. One thing I did make was a banana meatloaf recipe I found in the Free Press archives from the 1930s. It sounded so weird I had to recreate it and then proceeded to bring it into the newsroom and force my co-workers to taste test it with me. It was surprisingly delicious!

What can people expect at the The Free Press Fall Supper on Oct. 1 at the Ukrainian Labour Temple?

This year’s Free Press Fall Supper is basically a fine dining potluck. We asked local chef Paul Ormond, of Lola D’s catering, to come up with a four-course meal based on the 150 recipes included in the Homemade cookbook. It was tall ask, but he delivered and came up with a menu inspired by 12 different dishes in the book — it really captures the wide diversity of submissions we received. You can check out the menu and buy tickets on our Eventbrite page.

The Fall Supper is a fundraiser for Harvest Manitoba, with $25 from each ticket donated to the food bank. Attendees will receive a tax receipt, beverage samples and a chance to win some great prizes in a silent auction for Harvest. We will also have the Winnipeg Trolley Company on hand to shuttle folks from the Free Press building to the Ukrainian Labour Temple, a beautifully restored national heritage building in the North End.

Where are your favourite places to eat in Winnipeg right now?

For dine-in, I’ve been loving Bonnie Day. It’s close to home and a cute, casual spot to grab some small plates and a nice glass of wine or a cocktail. For takeout, my go-tos are Lucky Koi on Portage and Bread & Biryani on Ellice.

What’s the most underrated Winnipeg restaurant (or type of cuisine)?

That’s a tough one. There are a lot of hole-in-the-wall spots in Winnipeg that don’t get the same recognition as chef-driven restaurants. I’ve been seeing a lot of Filipino fusion food vendors popping up at markets and events lately and I’m excited to see where that scene goes.

This project has affirmed all my beliefs about food, especially home-cooked food. It’s more than just sustenance. It’s a way for humans to connect with one another and share stories about themselves and the people they love.