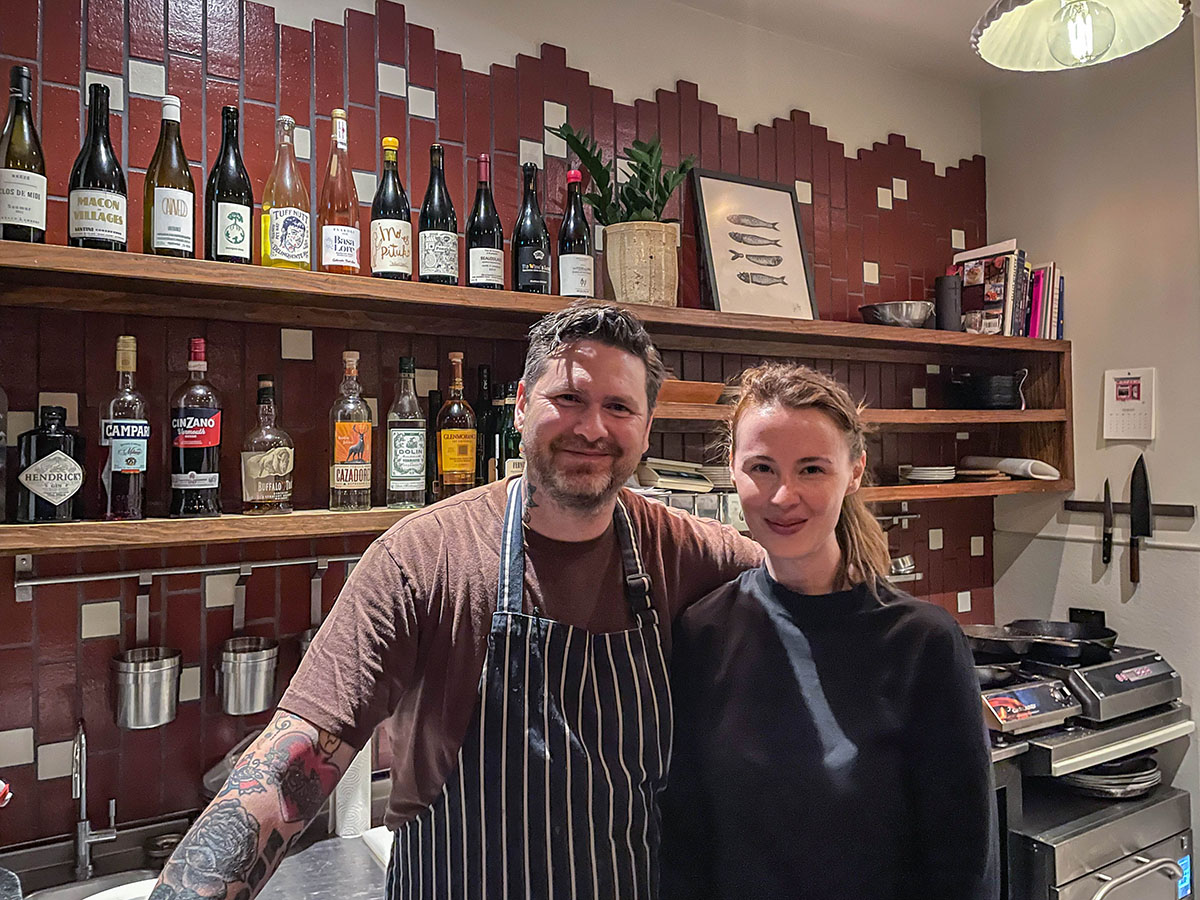 “We always wanted a kitchen party-style place, so this has just been great,” said Chef Adam Donnelly as he stands in the city’s smallest open kitchen after his fifth night of service at Petit Socco.

The restaurant just opened in the former tiny home of Close Company on August 17. It’s already booked for the next three weeks, as so many locals can’t wait to see the former Segovia chef back in the kitchen where he oversees a room of just four tables, with an additional three tables on the quaint patio.

Donnelly has teamed up with his partner Courtney Molaro to create the space, which they only took over in late June. Molaro handles all the service and bartending (options are a negroni, Old Fashioned and a classic martini), while her hand is also all over the room’s design, including the cool tiles behind the open kitchen/bar (yes, the bar and kitchen are one and the same, meaning you’ll often see Molaro making a drink with Donnelly plating food as if they were literally joined at the hip).

At Segovia, which closed during the pandemic in 2020 after operating since 2009, Donnelly’s food always received rave reviews and made all the lists–from Canada’s 100 best to Maclean’s 50 best restaurants in Canada–which surely is something that will continue here in this super chill spot that already has that relaxed kitchen party vibe down pat.

Molaro’s service is as warm and attentive as always, while Donnelly drops off most of the dishes at your table, taking time to explain the ingredients and how each dish keeps evolving from the previous nights’ service.

We sat on the patio where that fun port hole for drinks is still in use from the Close Co. days (it’s a fun necessity to comply with a liquor licence that doesn’t allow drinks to be carried on a public sidewalk). Here, we quickly became friends with the other two tables of Segovia-loving/longing locals, who started a game of sharing stories in between courses. During the evening, another Donnelly enthusiast also popped his head into the patio to exclaim something of the effect of, “how excited is everyone to have this place in the neighbourhood!” Indeed.

The mood was jovial and communal, with each of us getting excited for our fellow diners to tuck into a dish we’d just finished. It was breezy vibes all round.

The food and wine

The chalkboard menu of seven items has already changed since the opening week and will continue to do so. As Donnelly said, “there’s no real recipes, I’m just adapting the dishes each day.”

Most people have been ordering the full menu to share, which is what we did, as did all the tables around us. With dishes running between $10 to $32, the whole menu comes out around $110 for two people.

First up was Donnelly’s sourdough, which he has been making throughout the pandemic for places like deer + almond. It comes simply with Spanish Guindilla peppers for a touch of heat, slices of saucisson (cured French sausage), olives, and olive oil (as Donnelly states, “there’s olive oil in everything”).

Then there was zucchini fritti, using both the vegetable and its flowers. The herb-studded batter was so light and crispy and not at all oily, while the accompanying herbaceous, creamy raita sauce had us spooning everything off the plate. (If you are sharing the menu between three people, perhaps order two of this dish). Next, shishito peppers were simply blistered on a cast iron then piled with shavings of parmesan and bottarga (salted fish roe that looks like orange zest) for seasoning.

Following that was seared albacore tuna that had us dancing in our seats. The delicate slices lay on a bed of perfectly al dente white beans, with a sweet and smoky spice blend and chiffonade basil. What made this fish sing was a thin pool of buerre blanc that had so much to it. I asked Donnelly what the acid was to cut the butter in the sauce, and he went on to liken it to being escabeche-infused, in that he cooked down classic escabeche vegetables like peppers and carrots, then added vinegar, to create an acidic and vegetable-forward base note for the sauce. It was a sauce that you just couldn’t get enough of–buttery and sweet and packed with flavour from that vegetable reduction. Be sure to save some sourdough to sop up any remaining liquid on the plate

The lamb dish too had an ethereal sauce, this one featuring a reduction made from roasted lamb neck bones and plenty of red wine. The lamb loin itself was rosy and spoon tender, accompanied with a roasted tomato, a handful of capers and plenty of basil leaves for more brightness. Donnelly said later all the sauces are made  à la minute on a little induction burner, while also joking he hadn’t made a proper buerre blanc since back in his culinary school days at Red River College.

Dessert for our evening was a simple savarin cake hidden under a healthy portion of whipped cream with blueberries; a nice light way to finish off the night.

For wines, Petit Socco consulted with Taylor Archibald, the GM of Ellement Wine & Spirits to create a super interesting one-page list of mainly natural/organic wines (fun fact: Archibald used to work at Segovia back in the day). We went with a Gamay, the Domaine Joubert Beaujolais Cuvée à l'Ancienne 2020, which is super soft with an earthiness and plenty of dark stone fruits on the palate that paired well with all the dishes. We also did a glass of Segura cava, that old staple, with dessert.

The list has tasting notes for each bottle (there’s a couple wines available by the glass), while Molaro of course will give you recommendations. For next visit I have my eye on a Slovenian wine—the Movia “Sivi” pinot grigio—that Molaro says is excellent.

The restaurant is only taking two seatings per night, so you won’t feel rushed through your service. You can book a patio seat, but of course the weather could be a gamble, as the small roof over it isn’t guaranteed to hold water in stormy weather.

… And that’s the only time you can use the words “stormy” or “hold water” in an article on Petit Socco, as this new little gem is both tranquil and affirming in its culinary offerings. It’s a space that truly makes you feel like you’ve been invited into a couple’s home to casually partake in a pleasant culinary experience.