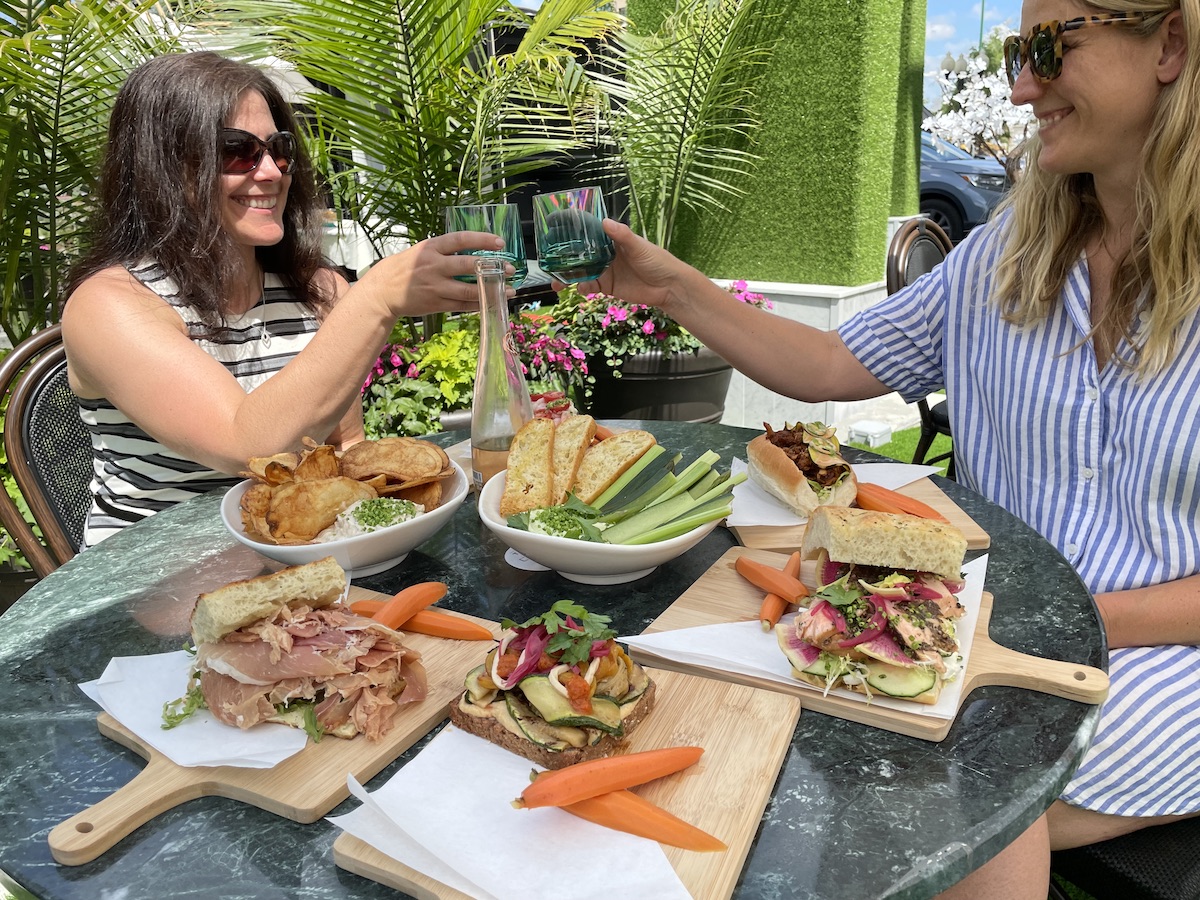 Don't you just want to be here? The new Sunset Terrace at the Fort Garry Hotel (PCG)

Fort Garry Hotel's new patio is a scene all to its own, and one you can't miss this summer

“What you are seeing here is our L.A.-inspired look,” said Maria Cefali, the Director of Marketing for The Fort Garry Hotel, Spa and Conference Centre, while standing on the brand-new Sunset Terrace Eat+Drink Patio.

“We’ve also had someone say it felt Parisian…so clearly we’re taking people outside of Winnipeg but at the same time we’ve created this great space for visitors to enjoy here in our downtown,” Cefali continued.

The Fort Garry’s new-look patio is a stunner, and an inviting scene with its ample plants, green walls and sleek container open-kitchen and bar.

The look is inspired by hotel owner Ida Albo’s recent trips to Los Angeles, while one Instagram story has confirmed (“where are you on holiday? This patio looks so nice!” came a chorus) that this new al fresco setting really takes you places.

Like so chill even the plates are chilled, while the menu includes frosé (yes Veronica, Elle, and Alex, you read that right; slushie dry rosé), frozen margaritas that are crafted AF (artisanal and frozen that is), and fun things to eat like divine dips (who doesn’t want housemade chips and French onion dip made with five types of onions) and fancy sandwiches served on buns that have moved past pillowy to a cloud-like realm.

Plants, so many. And in between them you’ll find 17 tables, all serviced by large white umbrellas. Huge green faux plant wall dividers divide you from the Broadway traffic, while looking up you are on the sunny, west-facing side of Winnipeg’s castle.

Both the bar and kitchen book end the front area, being two half-sized shipping containers (they are cube-shaped; three square metres for cooking notes Chef Kyle Lew) that face one another, ensuring plenty of space for plants in between.

The servers' uniforms are the perfect amount of camp, with black bowties and crisp white shirts. Underneath your feet you’ll find faux grass that will make you want to take off your shoes with its just off the fairway-like thickness (don’t be tempted), huge planters dominate sightlines in all directions, while at night the wall of fake white trees provides a tranquil glow.

It’s a place that draws you in. So much so, that we were here before service was set to begin (it opens at 3 p.m.) and a number of tables, including a couple from Auckland, New Zealand and Tampa, Florida, (who had already eaten here the night before), and our new best friend from Saskatoon, Tara Zarry (more on her later), came to sit next to us to drink it all in. (The friendly, zesty staff who were in the midst of setting up, didn’t mind the early customers).

“Winnipeg is of course the “Slurpee Capital of the World” so we’ve kind of up that ante with slushie drinks–with presence,” said sommelier and Hotel Beverage Director Christopher Sprague.

Inspired by finding slushie machines in the hotel’s massive storage, Sprague has created a whole granita menu, meaning there are plenty of icy numbers ready to savour beneath the sun.

“Along with frozé wine, these granitas have exotic flavours like rose water, passion fruit, hibiscus–those more elegant offerings I suppose you could say; real adult slurpees. Plus, we are also trying to bring back Caribbean swizzles, that I haven’t seen many people do,” Sprague continued.

For granitas, you can create your own on the menu matching your “flavours” (which also includes blood orange, watermelon and peach) with your “poison” (Aviation American Gin, Tito’s Vodka, Gosling’s Black Seal Rum, etc). The Sunset Sizzles feature your choice of premium vodka, gin, bourbon or black rum, plenty of crushed ice, lime, simple syrup and bitters, all swizzled up by the propeller-like wooden stick.

The wine service (and Sprague always finds gems) is now composed of all recyclable cans and glasses and are single to two-person serve. There’s no fear for broken glass in the grass, as the stemless ware is now high-quality plastic, while both beers on tap are of course local, coming from Good Neighbour Brewing (its Czech-style pale lager), and Low Life Barrel House’s Small Pale Ale.

We drank the Gérard Bertrand Côte des Roses 2021 Languedoc-Roussillon (375ml bottle; so cute), a bright number that will remind you of the current crop of local strawberries with its lively acidity, which paired nicely with all the dishes below. Of course, granitas were also consumed, with the Grand Margarita (using Espolòn Blanco) and the Rose Water both being standouts, balanced with just enough sweetness and tartness, while also being quite large, allowing you to sip away in the sunshine.

The menu by Chef de Cuisine Kyle Lew, who locals will recognize from Chew, The Store Next Door and Lark, has been tailored made for efficient service just steps from where it’s made.

Most items can be eaten with your hands, while most dishes come on chilled plates that are a pleasant surprise in the afternoon sun.

Kid you not, those cloud-like bread rolls here take a starring role “a third of the menu is featured on these buns because of how damn good that bun is,” said Lew. “For a while, once we first had them, Christopher and I thought we should just open a hotdog stand.”

The buns’ creator, Baker-in-Chief Angela Tambiloc, is also responsible for the hotels pastries and that celebrated Red Spring Bakery sourdough, which commercially is featured at many of the city’s best restaurants when bread is needed to sop up sauce or present an open face.

On the Sunset Terrace menu you’ll also find her focaccia used for high-piled sandwiches like pastrami-spiced smoked salmon with bright watermelon radishes and frisée for crunch and colour, and a base of horseradish cream cheese. And one featuring thin shavings of mortadella with pistachio pesto.

There’s also open-faced options on Tambiloc’s Danish rye bread, including a nice vegan one with grilled zucchini, roasted peppers, topped with a harissa and tahini sauce with flat leaf parsley.

From open faces to smiling ones, one could be found on that aforementioned Saskatoon tourist Tara Zarry, who we couldn’t help but exclaim to our saucy waiter Michael Stadler “this is the best sandwich I have ever had… and I just got back from a month in Hawaii!”* This was a roast beef with caramelized onion, Dijon-horseradish mayo, arugula and Manchego cheese.

More sandwiches we recommend include the simple mini shrimp served with a remoulade and halved Greenland Garden tomatoes and the pulled-pork, served with a spicy barbecue mayo, curried zucchini pickles and thin shavings of jalapeño. Simple, killer stuff, both coming in those glorious rolls on a nest of shaved iceberg lettuce–“because there’s something magical about iceberg on a roll, it’s so lovely” said Lew. All the sandwiches come with local pickled vegetables.

Salads are all about embracing the local supply, with those Greenland Garden tomatoes making the basis for a lovely simple dish with salt, fresh basil, olive oil and slices of 12-month Manchego.

And those dips! A table consensus was that everyone would buy the green goddess dressing should it be bottled. Here it’s served with a simple crunchy crudité. The onion dip, which Lew admits is laborious–“it takes five hours to make it, but then you taste it and say, ‘okay it was worth the time”–absolutely rocks. You’ll never be able to pour a pouch of Knorr’s into a sour cream container again without wishing you were here instead. Even the chips–crispy and long with the slightest bend in the middle–are worth high-fiving over. It’s a must-order along with a granita to start.

It’s just a peach of a scene, and a laid back one that is primetime for a post-work escape, or a great start to your afternoon like our friend Tara should you be staying in the castle itself.

Should the weather be foul, you can always head inside to the gloriously restored Oval Room Brasserie, which you can learn all about in our feature here.

*We can’t speak to Hawaii’s sandwich scene. But regardless, take that Big Island!