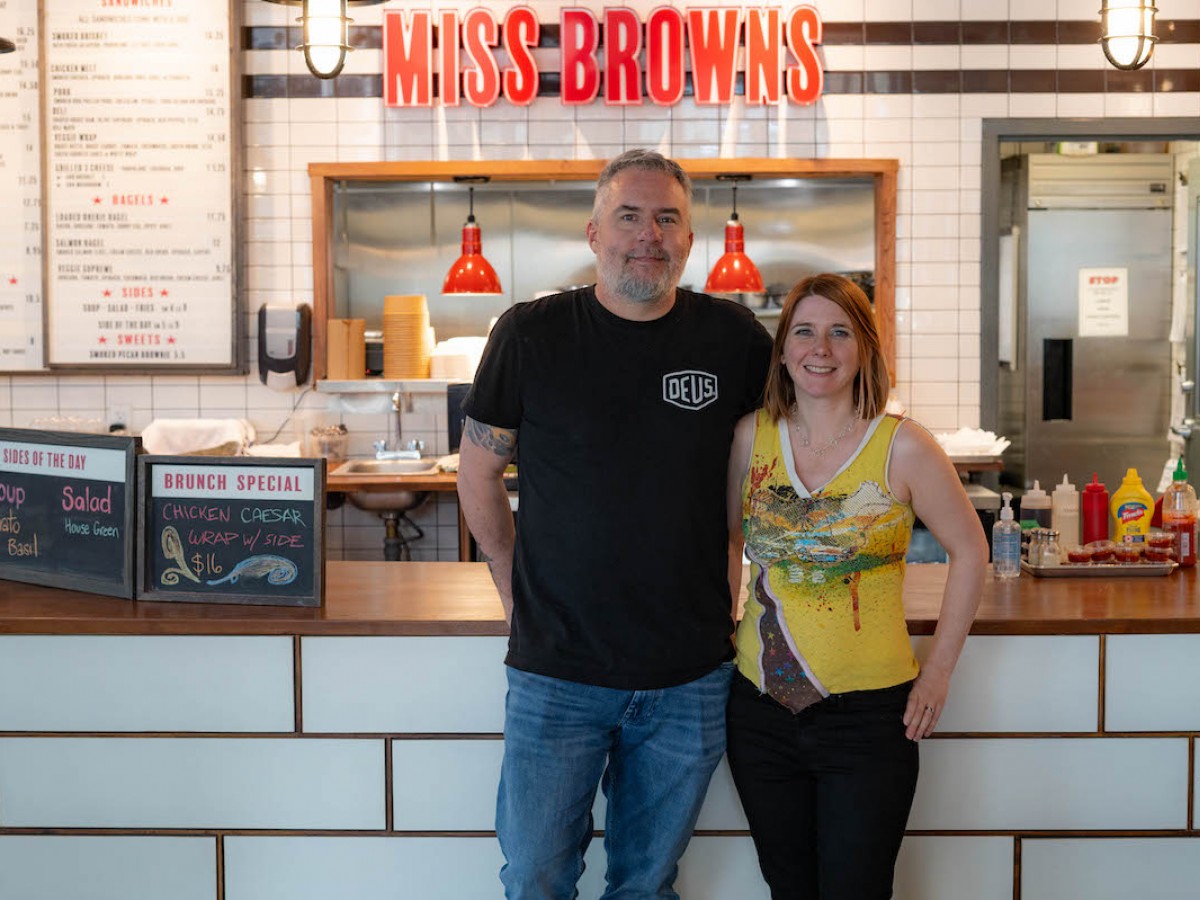 Miss Browns sandwiches are so good that they've brought us to tears–on multiple occasions.

When culinary couple Jenny and Steve Tyrrell first opened the shop at 288 William Avenue on April 1 back in 2015, it became one of our top choices for lunch or brunch in the Exchange District, and has remained so throughout the years.

Those toasty, pressed sandwiches from Chef/Co-owner (and Aussie) Steve––whose smoked brisket, chicken and pork can seriously make you emotional––are masterpieces, hitting all the right notes between saucy, smokey, crunchy and fresh, always making good use of local greens.

The Miss Browns menu also includes some of Winnipeg’s best brunch items, from a lively shakshuka to decadent Bennies, French toast and a brisket hash (those cubed browns!) that just won’t quit.

Being so close to us at Portage and Main, we couldn’t get enough, while the rest of downtown eventually got to share in the sandwich and brunch splendour in December 2019, when Miss Browns opened a kiosk within the brand-new Hargrave Street Market.

Steve, who is an artist and craftsman by trade, created all the interior touches on William Ave., turning the former Subway location into a charming café with industrial accents with the help of his father-in-law. At Hargrave, he doubled as their general contractor, building the impressive wood countertop using reclaimed local elm.

For a time, between both shops, things were steady. The Market has its perks with new customers; the William Avenue location continued to be a neighbourhood hub. The original location's large kitchen also allowed them to run catering-style operations that brought in roughly 30 per cent of Miss Browns’ total revenue.

And then, right in the middle of the pandemic at the start of 2021, the walls literally started to cave at the original location— forcing them to close—while an ever-expanding national fried chicken chain had become an albatross around their brand’s neck at the Market.

Through all this, the Tyrrell’s would end up shedding some of their own tears—albeit tears of frustration—while patrons like us were still only weeping over culinary offerings like a brisket sandwich with chimichurri, Havarti and peppery greens (while eating it at my desk the napkins were only used to dab the eyes; it was a true sandwich experience)—not knowing what’s been going behind the scenes.

For a year leading up to the closure, the Tyrrells knew that something was becoming wonky with the state of William’s walls.

“We always noticed a slight slope in the floor—water would pool when you’d be cleaning—but that’s also just something you’d expect in an old building” said Jenny, who is the president and GM.

Steve’s chic subway tile had begun to crack, the roof was showing seepage and the floor in the back catering kitchen had noticeably slumped.

Given the amount of work they’d put into making the café–which includes the $260,000 it cost to get the room and kitchen ready and tens of thousands more over the years–the couple didn’t want to give up on the lease. Plus, the pandemic of course came and only made matters worse.

At this point, we’ll leave the story of the William Avenue location here, as there’s much to it that goes beyond this culinary blog. As to Hargrave Street Market, where they remain today serving the best hidden-within-plain-site brunch in all of Winnipeg, it has been a lifeline.

“If we hadn’t opened this place” said Steven while gesturing within Hargrave Street Market, “we would have been done. I’m talking bankrupt and there’d be nothing left of us.”

Being a kiosk-style set up in the market, new prospective customers are somehow making the jump to the national chain Mary Brown’s Chicken, which first started in St. John’s N.L., and now has 11 locations in Winnipeg.

If that isn’t confusing enough, the first Mary Brown’s opened here 2015, not long after Miss Browns did.

“When we first opened, Mary Browns wasn’t in town yet—we hadn’t even heard of it” said Steve, with Jenny picking up, “but then they took over.”

“Even during the pandemic here in the Market I’d hear people walk by us and say, ‘oh, Mary Browns, that chicken place,” said Jenny.

“So we at least thought, well that’s something we could use—that popularity—to distinguish our brands.”

Recognizing the absurdity of it all, the Tyrrells have come up with a new marketing campaign with local firm Vantage (using marketing funds from the good people at Downtown Winnipeg Biz) that’s not chicken when it comes to saying bird isn’t the word at Hargrave Street Market.

On bus shelters around the city you'll spot these new #notmarybrowns advertisements that flaunt Miss Browns' culinary creations. The fact that so many Winnipeg buses are currently sporting Mary Browns' Nashville fried chicken ads at the moment only adds to this ad face-off.

The campaign just launched at the start of June, with the Tyrrells hoping to see #notmarybrowns up on social when customers take pics of themselves beside the new ads.

At the very least, this new #notmarybrowns could bring on more tears—hopefully ones of laughter—while bringing more people in for brunch at the Market.

Miss Browns is located within Hargrave Street Market (242 Hargrave Street) and is open daily from 9 a.m. to 3 p.m., with extended hours during evenings when there are events at Canada Life Centre.