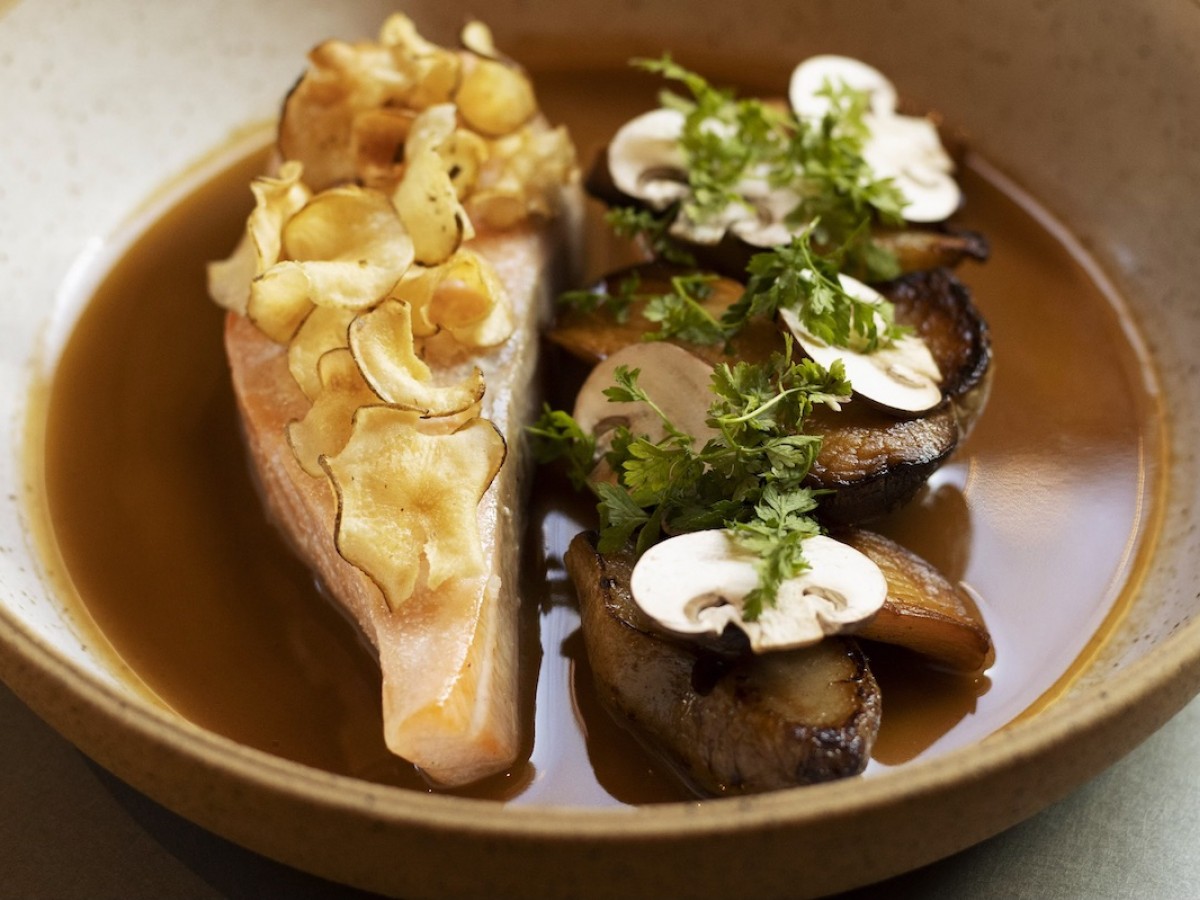 May these spots help bring on summer. And if they don't, at least we'll eat well

We see grass, so summer is surely coming. Along with way more rain than necessary, this change in season also means a new “new & notable,” with this pre-summer one following a theme of “flour power.”

There’s plenty of wheat below, including the malted variety for beer making, along with doughs, baked goods, Benedicts and some GF buckwheat and injera too.

Sherbrook Street is looking better than ever with two new spots. A super cool taproom that will introduce you to far-out ferments is just about to open. Plus, we’ve been presented the opportunity to glaze over some doughnut puns.

Buvette (#2-120 Scott St.) - Sunny St. James’ loss is Osborne Village’s gain, as veteran culinary couple Danielle and chef Alex Svenne quietly put Little Goat out to pasture last month before opening Buvette with their daughter Ursula in the former home of MoNUTS. St. James’ Little Goat was much fawned over by locals over for its unfussy comfort food, pan-seared local fish, family supper spectaculars and in particular its brunch service, the latter of which is now reverberating in Buvette’s tiny room. Here, the noted Winnipeg chef is now working under his daughter Ursula, who is running the show at this charming little space (long story short: while Little Goat was still open, the Svenne's were asked about this space as MoNUTS was looking to leave. They were of course interested in it with Ursula in the lead, and it all seems to have worked out, albeit much faster than anyone had expected).

Ursula is doing all the baked goods (it also runs as a bakery, with grab-and-go items) while there's plenty of savoury options too, including no shortage of egg yolks infused with melted butter on the weekend (that second bit is our way of saying this is the spot for a fine selection of eggs Benedict options on Saturday and Sunday—like this glorious avocado toast Benny above—along with soups, sandwiches, omelettes and the like). Oliver Svenne, Ursula's younger brother, can also often be found working (#familyrestaurant) while there are plans in place to expand the dinner offerings and use the space as a cooking studio for some casual classes in the near future.

Not a Bronut (100 King St., Unit C) – As you can perhaps put together in the above, at one point Winnipeg had MoNUTS, Bronuts, Pronuts and Not a Donut—a notion so nutty that even the Can-D-Man was confused. Thankfully, some of this is now squared as Bronuts—the Exchange District’s original fancy doughnut shop by brothers Brett and Dylan Zahari—has been transferred to Mumu Ma and Echo Shen, the couple behind both Not a Donut and Not a Waffle.

Shen and Ma’s  Not a Donut had garnered plenty of attention for their soft, chewy mochi batter doughnuts, which come in a range of colours and flavours. Then, this past winter, they lost their original Not a Donut shop in that terrible fire that took the Kirkwood Block this winter. At Not a Bronut, they’ve now essentially combined the two concepts, offering both the sour cream and cake-style doughnuts Bronuts was known for, along with daily selections of mochi doughnuts.

As to those aforementioned Pronuts, they are still going strong, and you can find their protein-packed and often gluten-free creations online and at select shops in the city.

Low Life Barrel House (398 Daly St. N) - Winnipeg’s most unique brewery/winery/cidery will soon have its own taproom. Low Life Barrel House, which previously was brewing its selection of barrel aged Bretts, natural wines, ciders and sour craft beers within Barn Hammer, will soon introduce its own space just off Pembina in Fort Rouge. As you can see and read in Ben Sigurdson’s piece here in the The Free Press (which has been covering these fellas' process since day one), the airy room flaunts 13 portly oak foeders (pronounced food-er) for fermenting their concoctions, which includes piquettes and piquette/beer blends too.

Now, “What’s a piquette you say?” Well, it’s like a low-alcohol natural wine, but instead of using fresh grapes, you make it using the leftovers from the original grape press, which includes the skins, seeds etc. It’s like getting a second run out of your fruit. They are generally super summery in flavour and appearance and if you rock up to a patio party with one of Low Life’s 750 ml piquettes, you can say things like, “Oh this piquette? Ya, I’ve been into this variety since sipping these in Brooklyn a few years back, but this one is made locally,” and everyone will take note.

The Two Hands dining room in one sixteen (116 Sherbrook St.) – We’ve put out a number of words on this collaboration between Good Neighbour Brewing, the Beer Can and Two Hands (chefs Michael Robins and Keegan Misanchuck), since it opened in January and you can expect more to come now that the full dining room experience is open.

Robins and Misanchuck have created a menu that pays homage to their time spent in London, U.K. during the pandemic (Robins was chef of Pidgin, a Michelin-recommended tasting menu spot, while Misanchuck was at BRAT—which is currently the world’s 78th best restaurant). The menu features sustainable fish, seasonal vegetables and dishes that change each week, with most spending some time on the wood-fire grill that we’d pay to watch being used.

The wine list from sommelier Rob Stansel is great; there’s plenty of beer pairings from Morgan Wielgosz and Amber Sarraillon’s Good Neighbour Brewing, which will be brewing soon right next door; the bar snacks menu rocks; and the room itself is a peach. In other words, go check it out. We’ll also have a full video on the place for you in the coming weeks.

La Crêperie Ker Briezh (110-267 Sherbook St) – Crêpes fans rejoice! Ker Briezh finally has its own home, which is conveniently located at the top of the Sherbrook Strip* (which we say runs from Cornish to Portage Ave.) at the bottom of that new apartment building. We’ve been big fans of owners Yvonnick le Lorec and Ketty Pichaud’s—who moved to Winnipeg from Brittany, France—serving up buckwheat crepes since they first started here back in 2018. While they’ve always had that summer kiosk on the Provencher Bridge (which will continue this summer), along with regular appearances at the St. Norbert Farmers’ Market, this new permanent location promises to bring even more Brittany to the city, with additional sweet and savoury crepe options that highlight several local suppliers.

Stay tuned here for forthcoming hours on Sherbrook, while until then you can find them at St. Norbert on Saturdays from 10 a.m. to 2 p.m.

*And seriously, between The Tallest Poppy, one sixteen, The Handsome Daughter/Magic Bird Fried Chicken, Roughage Eatery, Cousin’s Deli, Chrisma of India, Banza Noodle & Tea House, Hudson Bagels, Thom Bargen, Decadence Chocolate and The Nook (although we could go on) you can’t beat Sherbrook street when it comes to door-to-door culinary options.

CrusTop Pizza Project (20-1700 Corydon Ave.) – Winnipeg’s newest pizza joint is also its cutest one, serving 15’ rectangular pizzas made for one or two people from a little space in the same Corydon Avenue mall area where another favourite, Berstein’s Deli is located. Its owner, Wendy Xu, came to the city from Beijing, China, where she worked as a feature editor for GreatChef and Lifestyle media group. While there, she learned the trick to making excellent dough while out on assignment. At her little shop, which just opened in late April, she’s serving several staple red sauce pies, along with plenty of worldly inspired pizzas like the “Salty-Sweet Fans”—featuring pumpkin puree, Chinese sausage, broccoli and soy drizzle; a butter chicken one, and a char siu pizza with poblano barbecue sauce and swirls of Sriracha mayo. Are there dips? Heck ya! And not just ranch! How about lime crema, truffle aioli, honey Dijon or even mint chutney? Wendy, so saucy! There’s also a rainbow salad, dough snacks, several types of wings and “super spiral” fries too.

And while you are here, you should also take note that  Parcel Pizza—by the Roost and Oxbow Crew—is opening so very soon too, so check back as we’ll have a full feature story on them coming up.

Rimyya Friendship Bar and Restaurant (529 Ellice Ave.) - Finally, a new culinary listicle is never a new culinary listicle unless the West End represents. The latest in Winnipeg's best neighbourhood for worldly cuisine is Rimyya, an Ethiopian eatery that just opened in the former legendary home of Sorrento's. While we don't have the full scoop yet, our main man in the West End Joe Kornelsen describes his first injera experience here as "glorious"--which is all you need to know. Check it out next time you are looking to pinch up piles of flavourful bayenetu.

Drag Brunch: Pride Edition at The Tallest Poppy (103 Sherbrook Street) - If you like your eggs sunny-side-up with a side of sizzle (and perhaps some sassy shade) then get your tickets for the return of Drag Brunch. GORGE and Synonym Art Consultation are thrilled to present Drag Brunch: Pride Edition at The Tallest Poppy on May 28 and 29, with two seatings at 11 a.m. and 1:30 p.m. Performing will be Prairie Sky, Cake, Elle-Eganté, Feather Talia, Cheron Sharelike Lamour, Purple Haze and Special K, while DJ Jackson will be keeping the tunes coming. The show is, to quote our friends at Synonym, "family-friendly(ish)" while The Poppy, being the amazing institution that it is, is wheelchair accessible with gender neutral washrooms. Plus, Synonym has more on Safer Spaces and Community engagement policies here. Proof of vaccination is required at the door.

Tickets go on sale Wednesday, May 4, at 5 p.m. Here's the ticket link.