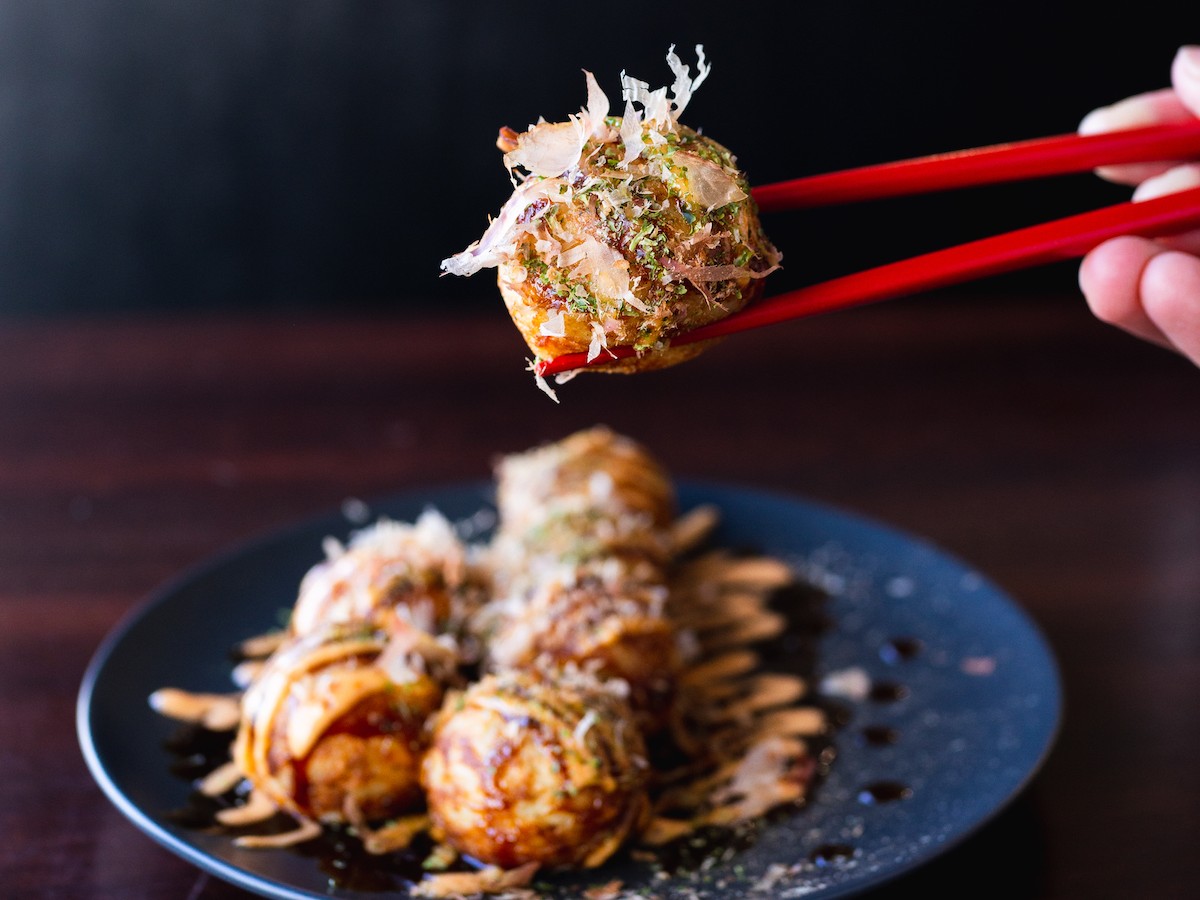 If you are looking for something new to eat or a new worldly café to sit in while watching these snowbanks melt—you’re in luck!

This latest New & Notable in anticipation of spring has everything from a joint that specializes in takoyaki, to new hip coffee shops, shawarma, an izakaya that has risen from the ashes, pizza with a hefty amount of toppings and plenty of veneration when it comes to vegetables.

Beshiestakoyumms – 1437 Arlington Street The name is a mouthful, as are the vast amounts of takoyaki on the menu of this new takeout business that opens in its own spot on March 5. Beshie is by Winnipeg Filipino entrepreneur Atheena Martinez, who has a deft hand at creating Japanese izakaya dishes like takoyaki (creamy fried balls of wheat with octopus tentacle in the centre, all topped up with sweet/salty sauce and dried bonito) after multiple trips to Japan, including living there for a year in 2019. Martinez started her biz in April 2021, first renting a spot inside Foodtrip Kitchen, and is now ready to serve on Arlington Street. The menu features traditional takoyaki, a version containing cream cheese, ebiyaki (stuffed with shrimp) and Osaka-style okonomiyaki (a loaded pancake like dish studded with shredded cabbage, bacon and shrimp, with a similar flavour profile to takoyaki).

For hours and more info check them out on Instagram.

Yuu Izakaya – 599 Regent Ave W - While technically not new, Yuu has been closed for quite some time due to fire damage way back in late December 2020. It reopened on February 15 for takeout, while the newly renovated dining room just opened this week, providing you a space to eat the aburi sushi (where the fish is torched on top of the rice) that is much better to eat in house. The menu also features all the classic cast of izakaya characters—tuna tataki, to baked oysters, takoyaki and gyoza, along with an assortment of poke bowls and ramen too.

Banh Mi Mr. Lee – 843 Ellice Ave  As locals know, The West End is where it’s at for Vietnamese cuisine (along with Ethiopian, Caribbean, Latin American…. we could go on), with Mr. Lee joining great company like Pho Hoang, Nhu Quynh, Viva, and Thanh Huong (to name but a few). The place is owned and operated by Ho Lee and Hang Pham, a married couple who first met while working at Phuong Nam in the North End, which was owned by Lee’s brother (you can get the full story here in this nice piece by Ben Waldman in The Free Press). Prior to opening Banh Mi in January of this year, the couple has had an extensive culinary background here in the city, including running Nhu Y from 2017 until it closed during the pandemic. At Bahn Mi Mr. Lee they now operate a counter service, with a charming little dining room to enjoy dishes like salad rolls, phở, vermicelli dishes, bubble tea and a number of banh mi options.

Friends Donair and Shawarma - 884 Notre Dame Avenue – Yet another new spot in the West End, Friends just opened in November 2021. Its owner Tahsin Adel used to be at Best Pizza and Donair, a hidden gem in Fort Garry which was featured on our Best Shawarma Guide back in 2015 (so you know this place is going to be good, with garlic sauce that just won't quit). The meats are cut from the spit to order, there are a number of plates if you are looking to go gluten-free (minus the pita chips), and they are even doing a donair poutine. Tashin was saying that since he's opened in the West End they have been so busy, so go see what the hype is all about.

Thompson-Style Pizza – 308 Fort Street – Even though this style of pizza comes from the north (for tourists reading this, Thompson, MB is 763 kilometres north of Winnipeg), it has a lot of similarities to the far south pizza of Argentina, where the cheese is piled on thick. It opened in November and is owned and operated by Jacky Colombe and Kenny Braun, Métis brothers who come from Thompson (read more of their story here, in this article by David Sanderson in The Free Press). You can find them in the heart of downtown slinging heavy pies with a thick crust, no shortage of toppings, and a tomato sauce that is both sweet and a touch spicy.

The city’s coffee scene continues to grow, with some established companies percolating into new neighbourhoods.

On Academy Road,  Empty Cup Collective has opened a new location (in the former Starbucks at 544 Academy Road) that is already bustling. Along with all the standard coffee drinks (using beans they roast at the flagship Panet Road location), they also serve La Belle Baguette’s incredible pastries, bowls and sandwiches, wine, and a selection of Trans Canada beers on tap too.

Harrisons Coffee Co—who also roast their own beans (which you can buy in stores across the city; look for the turquoise bag)—have opened up a third location in Chinatown at 218 Princess Street. It’s bright, airy (the ceilings are super high) and a nice setting to sip the day away.

And finally, there’s Dealer’s Choice in the Exchange District. This puppy is by Abi Torquato and Tyler Rogers who, along with having a dope Insta account for the biz, used to own the charming Gary Street Coffee, which is just two blocks from this new location at 111 Princess Street. As you’ll read in Eva Wasney’s piece in The Free Press, the vibe is set with a larger room with intriguing art, along with a liquor license,  a tidy little food menu and the new motto “"Your favourite coffee shop’s favourite coffee shop, now with booze and food"—which pretty much nails it.

For more New and Notable options, check out our  guide from Boxing Day and this one from mid-January.

Know of any new spots that need some love? Email us at info@tourismwinnipeg.com.