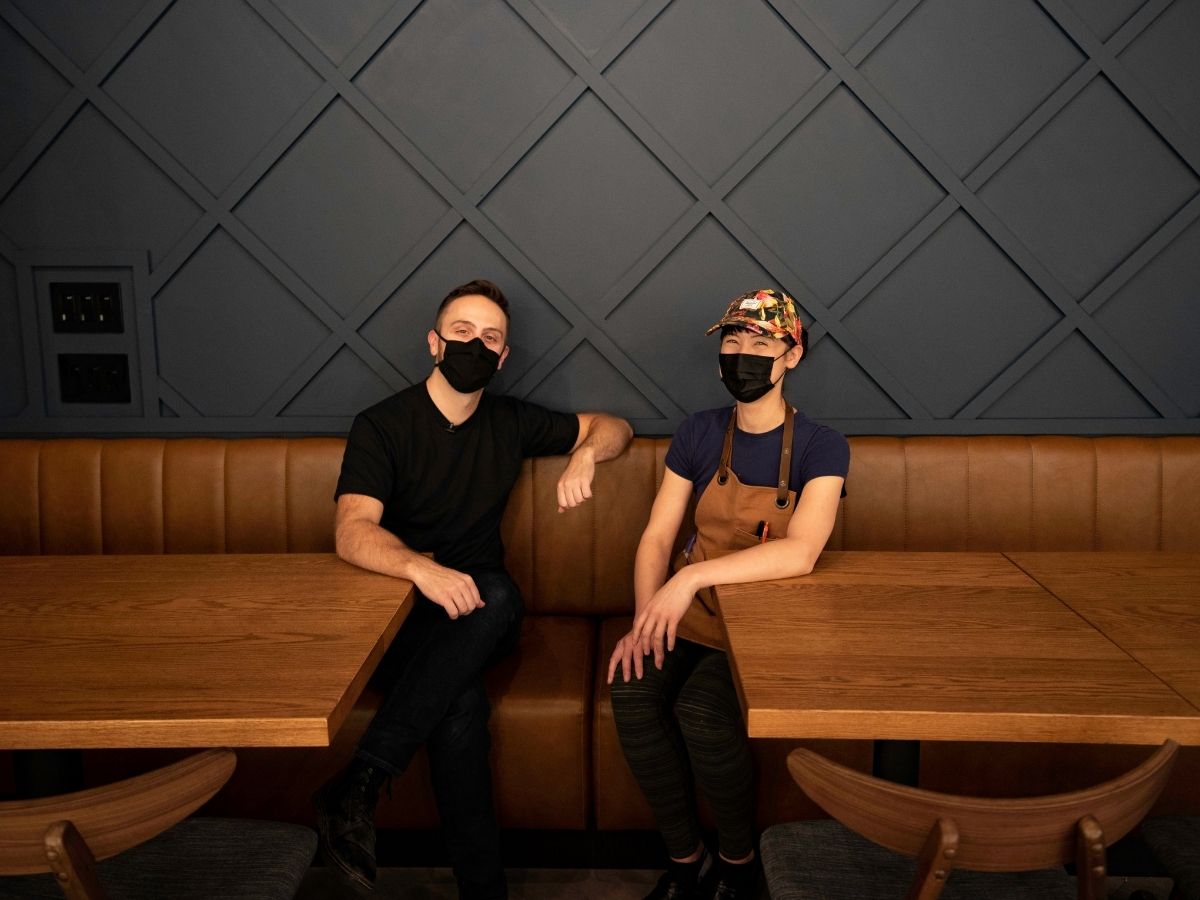 Two notable local culinary personalities have combined to create the city’s latest buzz-worthy room, which opened this October in Norwood.

Chef  Emily Butcher, who locals will recognize as the former chef du cuisine at deer + almond and the sixth-place finisher on the latest season of  Food Network’s Top Chef Canada, has joined Mike Del Buono of King + Bannatyne to create Nola, a new small plates restaurant that will be part of Del Buono’s Burnley Place Hospitality.

The location is the former home of Black Bird Brasserie and Bouchée Boucher (101-300 Tache Ave.), a space that beckons with street-level windows that run the whole length of the room. It’s really one of the great spaces in the city and one that Del Buono has had his sights set on for years.

“I couldn’t be happier about the location,” said Del Buono. “I used to work at Le Garage for years and I’ve always wanted to be back here in St. Boniface. Even back when it was Bouchée Boucher I’ll never forget walking in here for the first time, just thinking ‘I wish this was my restaurant.’ I love how you walk in and there’s the open kitchen and it’s a space that invites you to be lively and have fun.”

The Burnley Place Hospitality team has polished this gem further by adding cognac leather banquettes, teak-style round back chairs and metal latticework to the two bars, while all the design elements are amplified by three large mirrors on the sides of the dining room—which remains from when it was the Blackbird restaurant— and projects activity from the street.

As to the name Nola, it doesn’t have anything to do with New Orleans, instead, it’s more of a vibe.

“Standing in this space, with the inviting bar, the open kitchen and just the style of the restaurant we wanted, there were a couple of words that came to mind that were very similar to Emily’s style, and who she is as a person and the way we wanted this place to be,” said Del Buono.

“Those were fun, unique, simple and elegant. And that’s what we created the entire space and menu around – those four words.”

For food, the menu is approachable, unpretentious and fun.

“It’s coming from my West Coast background,” said Butcher. “Lots of bright colours. Lots of little, tiny garnishes on the plate. [It’s] really bright – brightness on the palate and for the eye. My Chinese heritage comes out but it’s subtle. It feels very West Coast to me."

Butcher is noted for making vegetables sing. For instance, her star dish at the Canadian Culinary Championships—where she finished third in 2020—had senior judge James Chatto writing, “[Chef Butcher] taught us exactly what happens to  turnips when they go to heaven.” You’ll get a similar flavour explosion on the “gunpowder roasted carrots,” where the spiced, honey glazed veg is caramelized and served on whipped feta.

There are playful sounding plates like crispy kuku sabzi (a Persian omelette) with roasted mushrooms and pickled turnip; a Waldorf salad that even Basil Fawlty could get behind with its chili fried Haloumi (who doesn’t love fried cheese?); and a loaded baked potato gnocchi with sauerkraut beurre blanc which won Butcher an episode of Top Chef Canada.

One dish both Butcher and Del Buono are excited about fuses their styles.

“It has to be the gyoza,” said Del Buono when asked what’s the first dish diners should order. “They are made in-house and there’s a bit of a cross-over from the sandwich shop. We’re making Reuben-style gyoza with Reuben-braised beef and sauerkraut and spicy mustard. They are unreal.”

On top of small plates, Nola will also offer lunch service, with plates like a fried mushroom po'boy made with wood ear mushrooms and a gochujang barbecue sauce, while “the burger is something special” says Del Buono. Lunch sides include tempura-panko onion rings with black bean ranch, plus there's a number of large salads too.

Sharing the Nola kitchen is Second Spot, a new King + Bann location connected to the dining room where The Canteen Coffee Shop used to be. Here you can expect the same quality sandwiches, soups and salads as the Exchange District staple, while the hallway connecting the spaces features a cool mural by Zephyra Vun.

Second Spot alone will be a welcome addition to this area of the city, which already boasts a fantastic culinary scene. (Just down the street the gorgeous Wood Tavern and Pauline opened in late-2019, while more gems just steps away include Pasquales, Le Croissant, Mrs. Mike’s and Diaspora Café).

That said, both Del Buono and Butcher are relishing the chance to get back to a bustling full-service dining room.

“I love service. There’s a reason I want to be in a restaurant setting,” said Butcher. “I love the adrenaline of service – seeing people, having a lively dining room – that’s my happy place. Competing is great as it pushes you to different avenues but day-in-day-out, I live for kitchen service. So, I’ve really been missing it.”

For Del Buono, it’s also a chance to get out from behind the sandwich counter.

“Full-service was always something I wanted to get back to… particularly as King + Bann was always tattooed on my forehead and I wanted to be more than the sandwich guy,” he jokes.

Nola officially opens Wednesday, October 6. Reservations can be made via phone at 204.505.0760. For full menus and hours go to  www.nolawpg.com