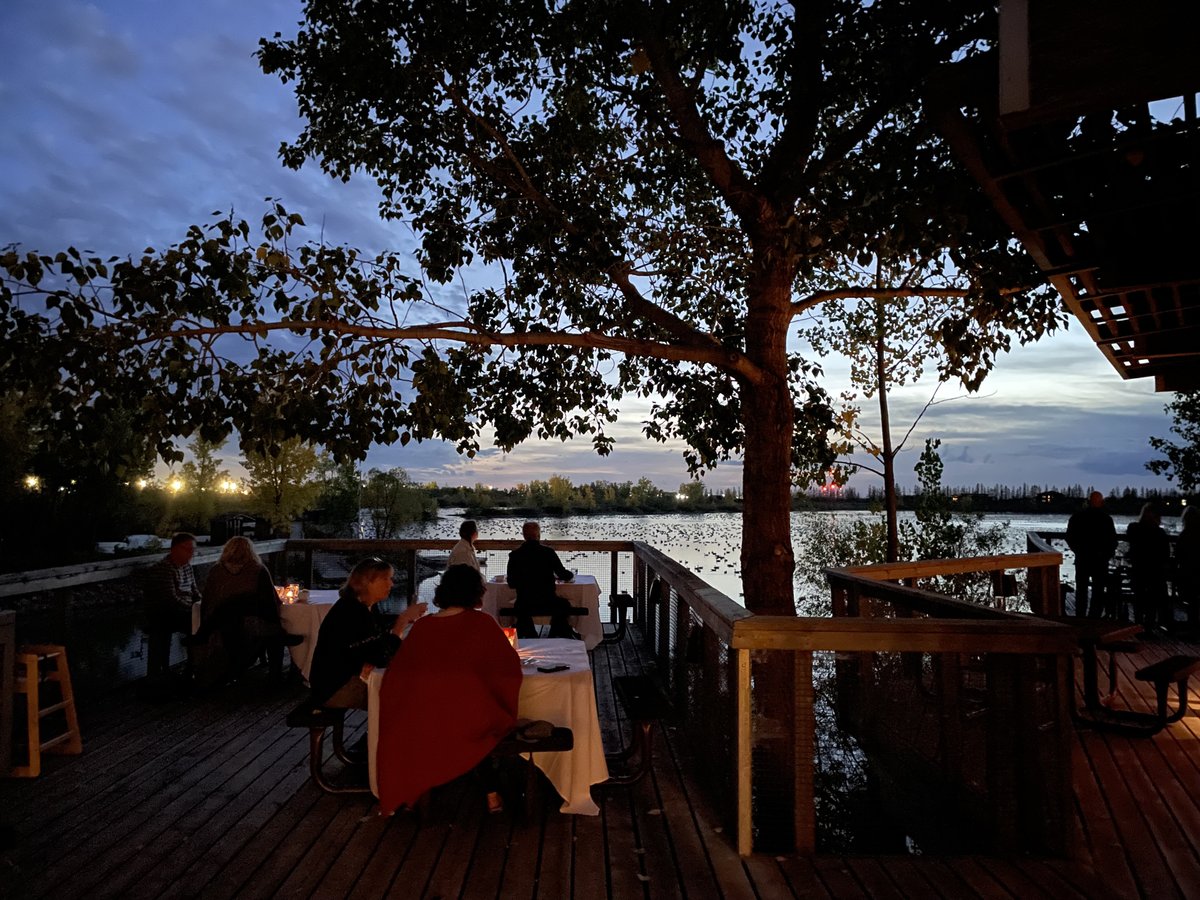 How about this for ambiance as you dine? (PCG)

"So fowl and fair a feast I have not seen" might remark Macbeth were he to attend one of FortWhyte Alive's famed Goose Flight Feasts.

But unlike Shakespeare's famed Scottish play, the scene at FortWhyte's Buffalo Stone Cafe is one of triumph—not tragedy—as the mind-blowing spectacle of thousands of geese, fowl and gulls descend on the lakes at dusk. You can see it all while enjoying a fabulous three-course meal from the team at SMITH.

From the dining room or on the outdoor patio above Lake Devonian, dine on plates composed of local ingredients while the geese and ducks, who have just spent the day feeding in surrounding fields, land for the night on the lake, making a symphony of honks and splashes.

We attended opening night (6:15 seating), and here's the gist:

Even before the avian entertainment begins, which happens all at once right at dusk, the setting within the Interpretive Centre already enchants. We were seated at a window seat, where we drank negronis and Arrow IPAs from Trans Canada Brewing while watching downy woodpeckers and black-eyed Juncos start their meal on the bird feeders that hang in windows.

Then bread arrived with butter whipped just shy of cloud form (don't you just loved whipped butter?). Both starters are peak autumn, particularly the super silky butternut squash bisque with its notes of cinnamon and cloves that are balanced by the acidity of a crème fraiche drizzle. The root vegetable salad had plenty of fun textures, including toasted walnut praline and al dente beets and turnips in a lemony dressing that had additional tang via a chèvre mousse. It's all served on a bed of arugula, with the semi-bitter, peppery greens rounding out the spectrum of flavours.

The mains we chose were the chicken ballotine and the beef sirloin, both of which are a nice showcase for sauces and something for which SMITH/Circa Catering consistently excels (it also runs the catering/kitchens at the WAG and Canadian Museum for Human Rights). The Malliard reaction on the sirloin was picturesque (if only mallards had been landing on the lakes too to complete the joke) and the caramelized shallot and thyme jus you could have sipped by the spoonful. The Yukon golds were buttery and fluffy and the roasted broccolini and carrots joined the party with some crunch.

The juicy ballotine is stuffed with a medley of wild rice and dried cranberries and sauced by a spoon-licking chicken velouté. We paired these with the wines curated by Jones and Co., which included a nice Cab Sauv and Sauv Blanc. For mains, there was an option of pan-seared salmon with a Chardonnay cream sauce and a vegan dish of quinoa pilaf-stuffed portobello mushroom with red pepper purée.

At this point, we grabbed our wine glasses and took a break from our table to get swept up in the spectacle that was beginning outside.

The sun was just setting and everywhere you looked in the sky birds had taken over. It started with hundreds of gulls overhead descending over the Interpretive Centre, followed by thousands of geese coming in from the south emanating more honks than a New York traffic jam. Given the size of the Buffalo Stone's two patios, there was plenty of room for all the diners to see this annual scene go down, which also included several tables who did all three courses outside (given the mild temperatures set for this fall, this will be a mainstay).

After filling our cameras and phones with photos outside, we headed back in for a round of rousing lemon tarts topped with meringue and fancy shards of sugar.

All in all, this is simply a can't-miss culinary experience here in Winnipeg, that only comes around for just a few short weeks per year.

Goose Flight Feasts are on now until October 24th, with this menu running to October 10. There are three seatings available per night (5:30, 6:15, 7:30). Book your table today here.