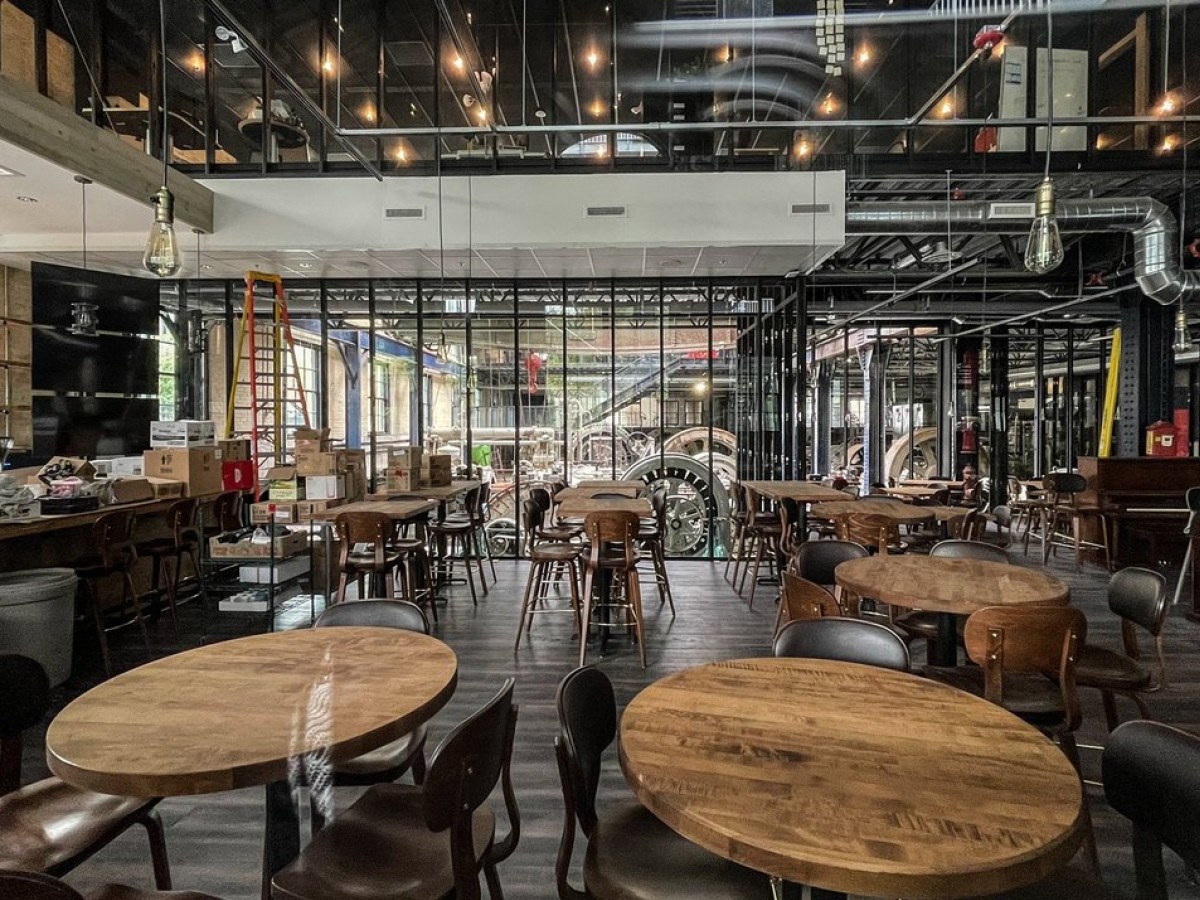 Hand-pulled noodles, a new concept from Sous Sol and the 10th annual Le Burger Week are all here

The last few weeks of summer are always a little gluttonous in Winnipeg.

For the past decade, the start of September marks the start of Le Burger Week, which this year goes for a whole two weeks. While other notable events like ManyFest Food Truck Wars will have to wait for 2022, we still have lots on offer below for all you food enthusiasts.

This includes a brand new hand-pulled noodle joint, the return of sushi greats, a cool new pop-up dining concept and a nefarious new brewery. On top of that, there’s a number of notable rooms to check out in September that we have the scoop on below.

A full fortnight for Le Burger Week
It’s astonishing how big Le Burger Week is for so many Winnipeg restaurants. What would be an average September dinner rush turns into 400+ burgers flying out the door while the lineups and takeout orders don’t stop.

If you are new to the concept, it’s a Canada-wide event that started 10 years ago in Montreal that sees participating restaurants put their best burger forward to win the titles of Peoples Choice and Judges Choice. This being burger-crazy Winnipeg, we tend to have the most participating restaurants per capita, which surely must be again this year with more than 180 entrants from across the city.

And thankfully it's not just beef. Each year brings a slew of options for vegans, the lactose intolerant, pescatarians, fried chicken fans, celiacs and of course, Daves.* Just check out some of these numbers from last year then hit that Peloton in preparation.

Past winners include Brazen Hall, Fionn MacCool’s and multiple titles for NuBurger, while in the past King + Bannatyne (which we have more exciting news on below) has regularly formed massive lines with burgers served on all sorts of whacky, including fried ramen noodle buns and doughnuts from Bronuts.

Tabula Rasa is open Tuesday to Saturday, 5 p.m. to 11 p.m. Lunch service will be announced soon.

Gol's Lanzhou Noodle Winnipeg – 2795 Pembina Hwy
As the legendary Golden Loong and Dancing Noodle have proved, Winnipeg loves hand-pulled noodles (and really, who doesn’t?) The newest spot to bring this craze from Northwest China is Gol’s Lanzhou Noodle. It started in Montreal in 2015 and this is now the fourth Gol’s in Canada (the rest are in Southern Ontario. And yes, we normally don’t cover chains but we’re making two exceptions today--see Shorty's below).

This place is a well-chili-oiled machine. The cute dining room has handsome wood tables and a little pagoda-style roof above the framed window of the open kitchen. The dough show is constant as the chef continuously pulls fresh dough into noodles of varying thickness for all customers to see.

The West End continues to be blessed with new restaurants whose owners are also new to this country. At  Gladys, Jamaican chef/owners Deidré Coleman and Patrice Gilman are paying homage to their grandmothers with authentic dishes like whole fried snapper, curried goat, oxtail, and all manner of jerk. There’s also plenty of vegan options too, including jerk portobellos with plantain croquettes. You can earn more about Gilman and Coleman and their participation in this month’s upcoming Black History Manitoba’s block party in Melissa Martin’s latest.

Shorty’s Pizza – 53 Maryland
What a huge save Shorty’s has been for the Wolseley/West Broadway area after the closing of our beloved Italian/live music venue Bella Vista (we'll always remember the pairing of D Rangers' rapid fire blue grass with big slices of pizza). Since taking over this summer, Shorty's has spruced up the façade while slinging large foldable slices on a nice, chewy dough. There are sandwiches and a few pastas too, while the local beer selection is also commendable.

Shorty’s owner Dan Hawkins (who has one other original location in Hamilton) also seems like a good dude. He’s kept that original mural and stage from the Bella (so live music will return) while, as he explains here to journalist Katlyn Streilein, he couldn’t be happier to be in both Winnipeg and the neighbourhood.

Edokko – 532 Waterloo
Veteran sushi chefs Masa Sugita and Alan Yin are back with a new location for  Edokko in River Heights. After a short stint downtown serving great izakaya dishes and excellent sushi, the Edokko team has quitely reopened in the former home of Chew and The Store Next Door (which is now Lark in the Exchange District—check out this incredible duck and waffle dish), they are back at it six days a week (closed Tuesdays), currently doing a takeout menu with all the sushi staples, along with dishes like barbecued whole squid. The indoor space is currently being run as a tiny Japanese grocery store with fresh fish sold daily.

Lola D’s Eat, Grow and Think Creative – 551 Sargent
The city’s pop-ups just keep popping, with this new one staging events that combine food and live music in the parking lot of X-Cues Café and Lounge in the West End. The food comes courtesy of chefs Paul Ormond—whose city CV includes Sydney’s at The Forks, Sous Sol and 529 Wellington, and Isaac Cassels—who works at Sunshine House. Their first menu in July (Taco Tuesday: A Fundraiser for The Sunshine House) had some amazing sounding tacos, including a vegan one featuring refried chickpeas and sous vide-then-roasted cauliflower. This Thursday, August 26, the next menu goes around the world with arancini, fish cakes and Filipino-style pork skewers.

Lola D’s itself, which is essentially a catering company/consultation biz that focuses on sustainability, is co-led by musician Kerri Stephens (Paul’s partner). As you can read in this article by Eva Wasney, the duo has some more great things in the works.

Dastardly Villain Brewery
The city’s newest brewery just launched its first can on August 13th (a Friday, you guessed it), the Nefarious Plan A, which is currently being brewed at Torque. By next summer, you’ll be able to enjoy this IPA and more diabolical beers within a steampunk setting at 726 Osborne (seriously, how hot is South Osborne again? See below for more.) Until then, keep a lookout on local shelves for more of their product and be sure to check out the tongue-in-cheek website.

G.F. Tacos – 112B Osborne Street
Gluten-free is what we’re going to say GF stands for here (which could be true—it is all corn tortillas). This clandestine taco shop opened in Osborne Village in late June and boy, it really is quite hidden, stationed in a back lane behind the former Toad location, now Osborne Taphouse. They are doing super tasty versions of all the classics, including al pastor, tinga, birria and roasted corn with black bean.

So many new food trucks
Thanks to our favourite emailer Patlv23, our 2021 Summer Food Truck Guide has expanded to include over 45 trucks, with plenty of new additions since the guide was launched way back in May. For instance, this past weekend the city's newest truck, Casama—a Filipino-Mexican fusion concept by Charlee's—just served its first customers on August 21. Check out all the new listings today.

Coming Soon!
We have a couple video feature stories planned for fall, including tours of new spots that are sure to kill it.

The first is a joint concept by Mike Del Buono of King + Bannatyne and Emily Butcher, the former chef du cuisine of deer + almond who just finished in the top 5 of Top Chef Canada after taking bronze at the Canadian Culinary Championships.

Del Buono’s Burnley Place Hospitality Inc has recently taken over the former home of Black Bird Brasserie in St. Boniface (101-300 Tache Ave.) where they will be staging two concepts. The first spot – Second Spot (har har), will be a new King + Bann location serving all those great sandwiches (and sides, including some of the city’s best soups!) we know and love. Beside it will be small plates restaurant  Nola, with Butcher at the helm of what we are told is a top-notch FOH and BOH team who locals will certainly recognize. Needless to say it has got us excited, with a tentative opening set for mid-September.

Another one on our radar is James Avenue Pumphouse in the Theatre District. It has an interior like no other as the dining room flaunts floor-to-ceiling windows that showcase the massive circa-1907 gears and pumps that were built to protect downtown from fires. To complement such a cool setting (it’s the old James Avenue Pumping Station, at 109 James Ave), executive chef Mark Merano's menu includes dressed-up versions of worldly comfort food, with dishes like a sizzling chow mein, Detroit-style pizza, red wine-braised short ribs and Korean fried chicken.