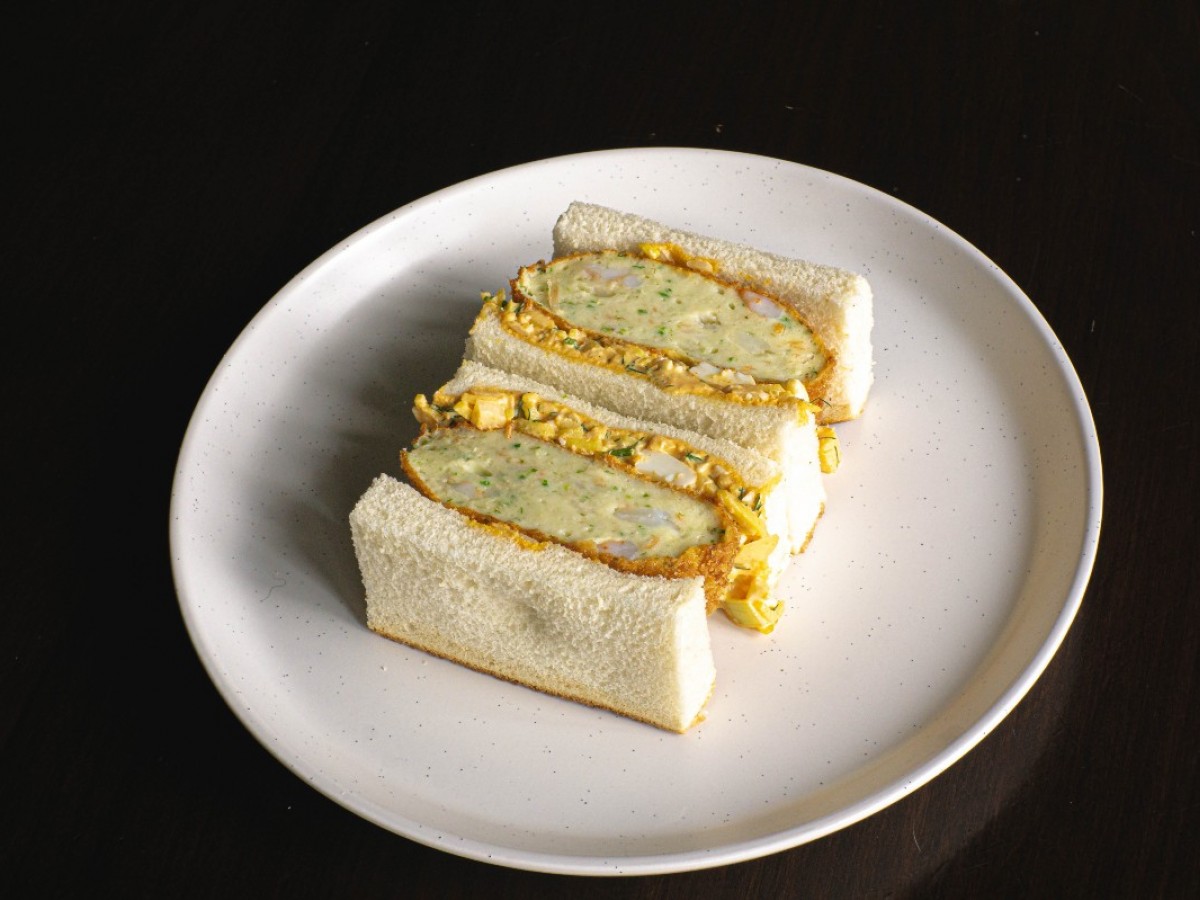 The Ebi Katsu Sando by Moshi Moshi, a pop-up run out of Khao House on Saturdays (photo courtesy of Moshi Moshi)

Plus the outdoor pop-up bars are coming back soon!

This new and notable for spring is something sweet tooths will savour.

It features elaborate cakes, trendy sandos and small shops that celebrate all things kawaii and coffee. You’ll also notice all these spots fit that fast/casual category that has remained effective throughout the pandemic.

Plus, there’s few more rooms to look out for that will be popping up soon, representing our ever-burgeoning brewery and pop-up bar scene, more sweets and a new space by one of Winnipeg’s best restaurants.

Tiny Bliss Café – Let’s start with Main Street’s Tiny Bliss, as we somehow missed it when they opened at the close of 2020. Owner-baker Lien Pham is a graduate of Tech Voc’s pastry arts program and had spent the better part of the last decade making cakes at a grocery chain before she decided to branch out and take over the former space of HK Snow Café at 1354 Main Street.

Pham says her focus is on Asian fusion desserts, with a menu mainstay being Japanese milk bread. As you’ll see on Bliss’ Insta, she also does all manner of custom cakes, while savoury items include Korean garlic cream cheese buns and lobster rolls when they come in fresh from PEI on Fridays. They use coffee from Elma, Manitoba’s Trail’s End Coffee.

Sugar + Salt Bakeshoppe – While Sugar + Salt’s baker/owner Kyla Milligan has been dazzling for some time with custom cakes, it wasn’t until February that she opened her first storefront on the Corydon Strip. Milligan’s culinary background includes the Bonnie Gordon College of Confectionary Arts in Toronto, which led to her former business Laugh Love Cakes here in the city from 2012 to 2017. After a stint in the UK, she’s now back with a new Sugar + Salt brand that still does custom cakes, weddings and events, along with this storefront that flaunts cookies, bars and some pretty incredible cupcakes with icing worth celebrating.

Fantasy Cakes – If you plan on buying us a themed birthday cake, we’ll take the barbecue cake by Fantasy Cakes (are those charcoal brownies? Can you eat the grills?) Fantasy Cakes is by Luba Yurchenko, who moved from Ashkelon, Israel with her husband and three daughters to Winnipeg in 2016. Even though Luba had already worked as a pastry chef and cake decorator in Israel, she continued her studies at culinary school here in Winnipeg before opening up an online bakery in 2019. As of April 6, Luba now has a storefront in River Heights featuring a pastry counter stacked with worldly knockouts like Georgian Khachapuri (that crazy good bread boat whose passengers are a sunny-side-up egg and cheese; we were first introduced to it at Saperavi on Corydon) and kanelbullar (Swedish cinnamon buns).

Fantasy Cakes is located in the old Store Next Door location at 530 Waterloo Street.

Boba Paw – For bubble tea with furry friends, here’s a charming new spot that opened at the end of February in the Polo Park district. Boba Paw has over 15 types of tea and a wide variety of toppings/pearls – from grass jelly, to aloe vera, red bean and even cheezo! There’s also slush drinks, sandwiches and sweets, while your furry friends will be fawned over by the super friendly staff.

Boba Paw is located at just off Ness at 296 Madison Street and is open daily, noon to 11 p.m.

Little Viet – Another bubble tea shop that has surfaced in St. James in February is Little Viet. Located right on Portage Avenue at 104-2565, this shop makes all the standard bubble teas along with specialties like Okinawa-style milk tea, using the caramel-like brown sugar grown on Japan’s tropical south islands. They also do a number of Vietnamese coffees, several flavours of yogurt, fruit sodas and freshly brewed ice teas.

Moshi Moshi – Just when we thought Khao House couldn’t get any cooler, they’ve now started to host a Japanese sandwich shop on Saturday’s called Moshi Moshi. Sandos (Japanese-style sandwiches served on fluffy crust-less white bread cut and served in a cross-section ready for your Instagram) have been exploding across North America in the past few years. This is thanks to notable places like LA’s Konbi bringing the hype to new levels, having been named Bon Appetit’s #1 best new restaurant in America in 2019. Since then, sandos – particularly the classic katsu sando – have been showing up on restaurant menus everywhere.

Moshi Moshi brings the craze to Winnipeg via Khao’s sous chef Aiden Ha, who has come up with a really impressive lineup that goes beyond the classic egg salad and katsu versions. Moshi’s gyu sando features medium-rare Manitoba beef tenderloin, bone marrow spread, caramelized onion and jus, while the ebi katsu one features a panko-crusted shrimp patty (see heading photo). There’s also a double panko-crusted ultra-crunchy chicken katsu, and a truffle tamago sando for all the egg lovers out there.

Moshi Moshi sandos can only be ordered here on the Gram, with pickup happening between noon and 4 p.m. (you choose your pickup time) from Khao House at 625 Portage Avenue.

Seven Café – Yet another awesome addition to Wall Street, Seven Café is a chic little coffee house where beans from Montreal’s Structure Roasters are brewed on an impressive Electra machine that produces a glorious, silky texture.

Outside of all the coffee drinks, Seven’s pastry counter is stocked with creations by For Us Bakery – including giant cream puffs that call to you from their display case. They also have a fridge section featuring some of our favourite restaurant items, including Yujiro ramen kits and Aroma Bistro’s hugely popular wontons.

As you can read here in the Free Press, 25-year-old owner Marc Tallman already has plans to open up a second location this summer in Sage Creek.

Thompson Style Pizza - Currently operating as a pop-up out of the Riverview Community Club off Osborne (90 Ashland Avenue) every Tuesday and Thursday, 4 p.m. to 8 p.m., this Indigenous-owned and operated biz first started slinging 'za at the very end of 2020. When it comes to pizza, Thompson-style is an homage to Thompson, MB's Santa Maria Pizza & Spaghetti house, where the robust pizzas are brimming over with cheese on a bready dough slathered in smokey tomato sauce. Owner/pizza chef Jacky Colombe moved to Winnipeg from Thompson (learn more here in the Thompson Citizen) where his cooking experience included five years at Santa Maria. In Winnipeg, he has most recently worked at Red Ember Common.

Colombe and his partners will be opening Thompson Style Pizza at 1556 Arlington Street this summer. Until then, you can find menus and how to order here from the pop-up on Facebook.

There’s plenty more to look forward to soon this spring too.

On the sweet side, Exchange District mainstay Cake-ology has a new pastry chef/co-owner who is ready to wow Winnipeg after an impressive stint abroad at two of the world’s best restaurants. Pastry chef Austin Granados CV includes the kitchens of Vea in Hong Kong in 2018 (it is currently ranked No. 16 on Asia’s 50 Best Restaurants) and Noma in 2020, along with a year with Dominque Ansel Bakery (the inventor of the cronut) in NYC in 2017. Cake-ology plans to reopen on May 1.

Another sweet place to look out for is Sugar Mama Cookie Company, which is set to open its first brick and mortar store this summer. Owner Vicki Anne Melo has been taking direct website orders for her custom cookie business for the past four years and we tell you, her creations are impressive to say the least (check out the Tourism Winnipeg cookie she made!) When it comes to custom logo sugar cookies, Vicki has you covered, while her rotund bakery cookies hit with flavours like Everything but the Kitchen Sink and Smore. Order online here while you wait for the store to open in St. Boniface at 184 Provencher.

On the drink side of things, pop-up bar season is set to start soon.

Cargo Bar is returning to Assiniboine Park this spring in the same location beside the Riley Family Duck Pond. This Friday, April 16 was to be the 2021 opening date, but we’ll see what the snow says. Until then, you can dream about sipping one of its craft cocktails and a local beer on the peach of a patio.

The Beer Can, last year’s popular downtown pop-up, will also be back soon. It has moved to the Granite Curling Club on the Assiniboine River, a mighty fine location if there ever was one being on a bike path and right outside of Osborne Village. On top of the lineup of local beers, this year The Beer Can will have its own cantina, with Mexican dishes that have been overseen by Mariachi Ghost’s Jorge Requena Ramos.

The West End is getting its own pop-up beer garden, aptly named The Garden at 955 Portage Avenue (right across the street from De Luca’s). This converted parking lot will boast nearly 10,000 sq. ft. of space, and will feature food vendors, local beer, wine, cocktails and weekly entertainment. Families are also welcome. As well, the Bijou Patio will once again open in The Exchange District, featuring local beer, wine and a location that allows quick delivery or pickup from all the excellent surrounding restaurants.

We can also anticipate some more new breweries opening this summer, joining the city’s current roster of 16. As you’ll read here in Ben Sigurdson’s article in the Free Press, this includes Low Life Barrel House (which is currently brewing in Barn Hammer) and Good Neighbour Brewing Co.(currently brewing at Oxus).

And finally, the Sous Sol team is opening a second room soon, also on Osborne. You can expect a feature story on that in the coming weeks.