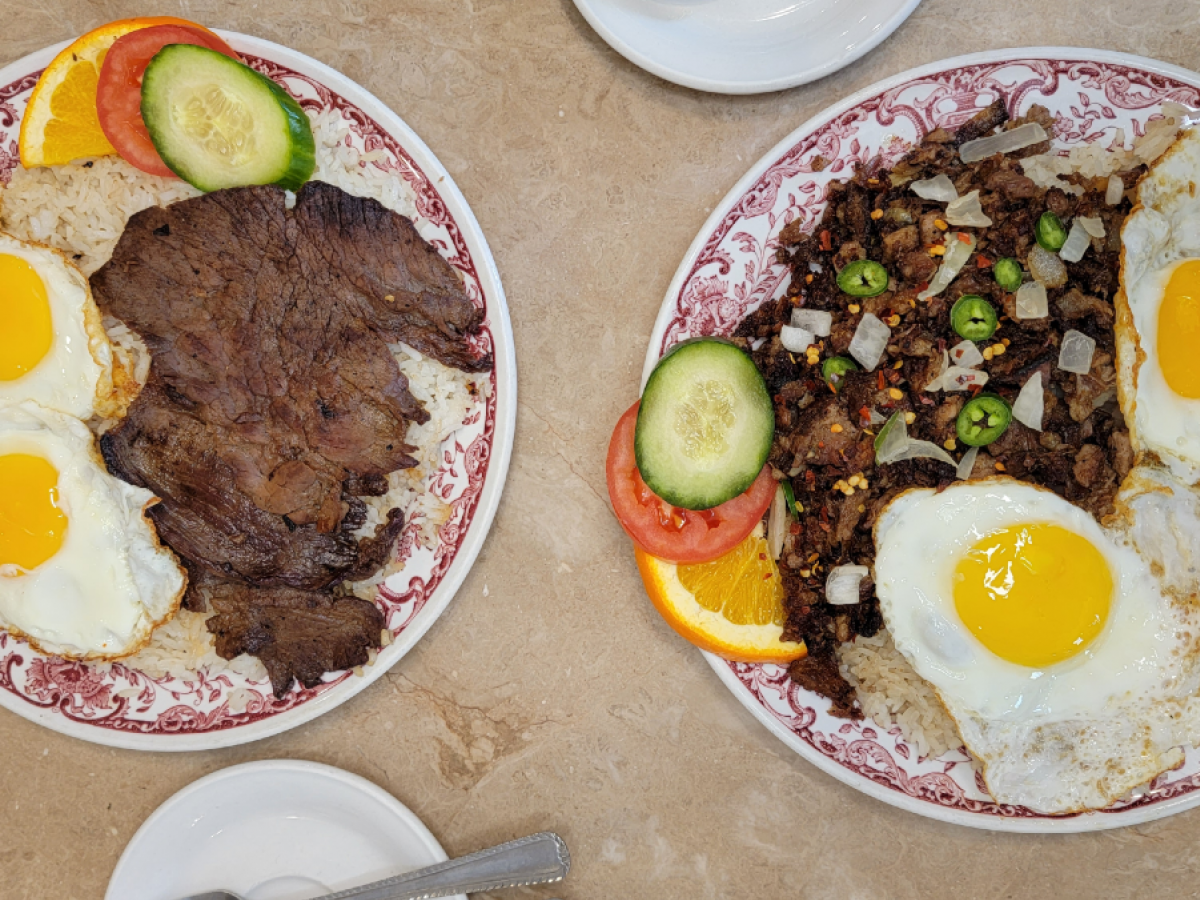 We are so lucky in Winnipeg to have a great variety of Filipino cuisine. I was talking to my friend who used to live in Winnipeg and now lives in Kelowna about how much she misses Filipino food, they don't even have one Filipino restaurant in K-Town!

At 8 per cent of the city's population, Winnipeg has one of the largest Filipino communities in North America—particularly per capita.

Growing up in Winnipeg as a kid in the '80s my Vietnamese momma worked in the garment industry along with many newly-immigrated Filipinos. Their work pot luck lunches were overfilled with a plethora of Asian dishes, momma always brought back home pansit and siopao that her Filipino coworkers made. I started dining in Filipino restaurants with friends about 15 years ago, just the traditional dishes like a tocino or loganisa breakfast and definitely my fair share of Shanghai lumpia spring rolls.

But today you can find many Filipino regional dishes, fusions, and even a great vegan joint! I had the pleasure of visiting the vegan restaurant Roughage Eatery, which is owned and operated by Pinoy Candice Tonelete and her partner Jessie Hodel, and they created a tocino tofu breakfast bowl that opened me up to how amazing vegan Filipino food can be too! Plus, with Filipino chefs like Jeremy Senaris competing in MasterChef Canada, the future is bright.

Here are my picks for the best Filipino restaurants in Winnipeg!

Max's Restaurant is owned and operated by proud Winnipeggers, JR and Arnel Albin of the Albin Group Inc. They create new menu items all the time inspired by their vivid memories of warm and joyous family feasts in the Philippines which are created in their Winnipeg kitchen. The space is huge, and they're so committed to the community, having sponsored so many charity events. They are known for their famous Crispy Fried Chicken and crispy pata (braised and deep fried whole pork hock with next level crispy skin). I had the pleasure of eating new menu items beef pares which is a braised beef stew made with star anise over egg noodles topped with fresh Asian vegetables.

For dessert I had palitaw sa latik and suman sa lihia, which is a rice cake with coconut brown sugar topping. The suman is wrapped in fresh banana leaves for extra fragrance. The true attraction that's exclusive at Max's Restaurant is the Giant Halo Halo; it's a classic Filipino dessert with shaved ice and milk with ube Ice cream on top with tropical fruits, beans, cheese (yes you heard me lol) and leche flan custard. Max's Restaurant has an excellent team, and it has upgraded the dining room with extra safety protocols.

A true hub in the neighbourhood of Elmwood, Charlee's is a consistent participant in all foodie weeks, with recent elite dishes for Fried Chicken and Poutine Week. Owner/operator Charlie Villapando is a graduate of Red River College's Culinary Arts program. He opened Charlee's in 2006 and is the creator of the OG Tocino (cured pork) Burger, which is topped with a sunny-side-up egg that's been a staple since the beginning. Charlie also owns Champs Food Truck and its menu can be ordered at Charlee's too, featuring Filipino classics with a Canadian twist--specifically with poutine. You can choose between variations like kare kare (braised beef short rib peanut stew) and caldereta (braised beef short rib tomato stew) as poutine! It wouldn't be a complete visit without its halo drinks: my go-to is the ube macapuno halo, which is a cream ube slush poured over jellies and sago, macupuno, and Ube ice cream. Charlee's is fully licensed and has a great selection of local beer too!

I was first introduced to Pampanga 15 years ago when I was invited to my friends "Debut" celebration there. The Debut is a traditional Filipino coming-of-age celebration which celebrates a young woman's 18th birthday. She receives 18 roses and there's so much amazing Filipino food! Ever since then, Pampanga has been my go-to for Filipino Breakfast silog. Silog is a class of Filipino breakfast dishes containing sinangag (fried rice) and itlog (egg). You pick your protein—classics are tocino, longanisa, sisig, or fish—but I've also had fried chicken or Korean BBQ variations. It also has the best lumpiang Shanghai (spring rolls), you've definitely seen them make a cameo appearance at your work potluck lunch and then disappear shortly after because they're so good! Whenever there's Grey Cup and Super Bowl, you can guarantee I'll arrive with a 100 pieces of this restaurant’s lumpia. Pampanga is a real family affair, owned and operated by Lourdes and Aladino Miranda with their daughter, Kelly Miranda.

Just outside of Winnipeg in West St. Paul is Grassmere Family Restaurant. It has been in business for more than 15 years and is owned and operated by Mac and Lina Cabungcal, with help from their sons Charlie and Carlo. In the beginning they served a traditional Canadian breakfast and lunch menu that catered primarily to truck drivers, but about eight years ago their customers requested that they add traditional Filipino dishes and it evolved with Charlie and Carlo inventing new items. The most popular dish they have on Insta is the ube Pancakes--a Foodie's dream! Three layers of ube pancakes drizzled with ube syrup, a scoop of ube ice cream, coconut strings and icing. This has created a huge buzz with the Filipino community, with Garden City and Maples' residents making the commute to West Saint Paul, and I must say it is well worth it! Other notable dishes are the tocino fries and tocino tacos.

A new(ish) location I was told I must visit is Jenmuel's. It has been operating for two years by Jenny and Lemuel Quijada, who have two locations, one on McPhillips in Garden City and one on Euclid in Point Douglas. They're from the region of Cebu, which is a Province of Philippines made up of some of the most gorgeous beach islands in the world. Their specialty in Cebu is lechon—a young pig stuffed with a secret mix of herbs and spices (usually including star anise, spring onions, lemongrass), skewered on a bamboo pole and roasted whole over hot coals. Amazing we can get this in Winnipeg at Jenmuel's! In Chinese cuisine crispy pork belly is very common too so I can tell you the difference between lechon Cebu is the crispness and thickness of the skin and the smokier flavour. Another attraction at Jenmuel's is its Karaoke stage where customers can sing some of their favourite love ballads after their meal. I absolutely love it here.

Looking for more Filipino cuisine in Winnipeg? Check out some of our past articles, which include more great spots like Jeepney, Mar's Sisig, and Foodtrip Kitchen.