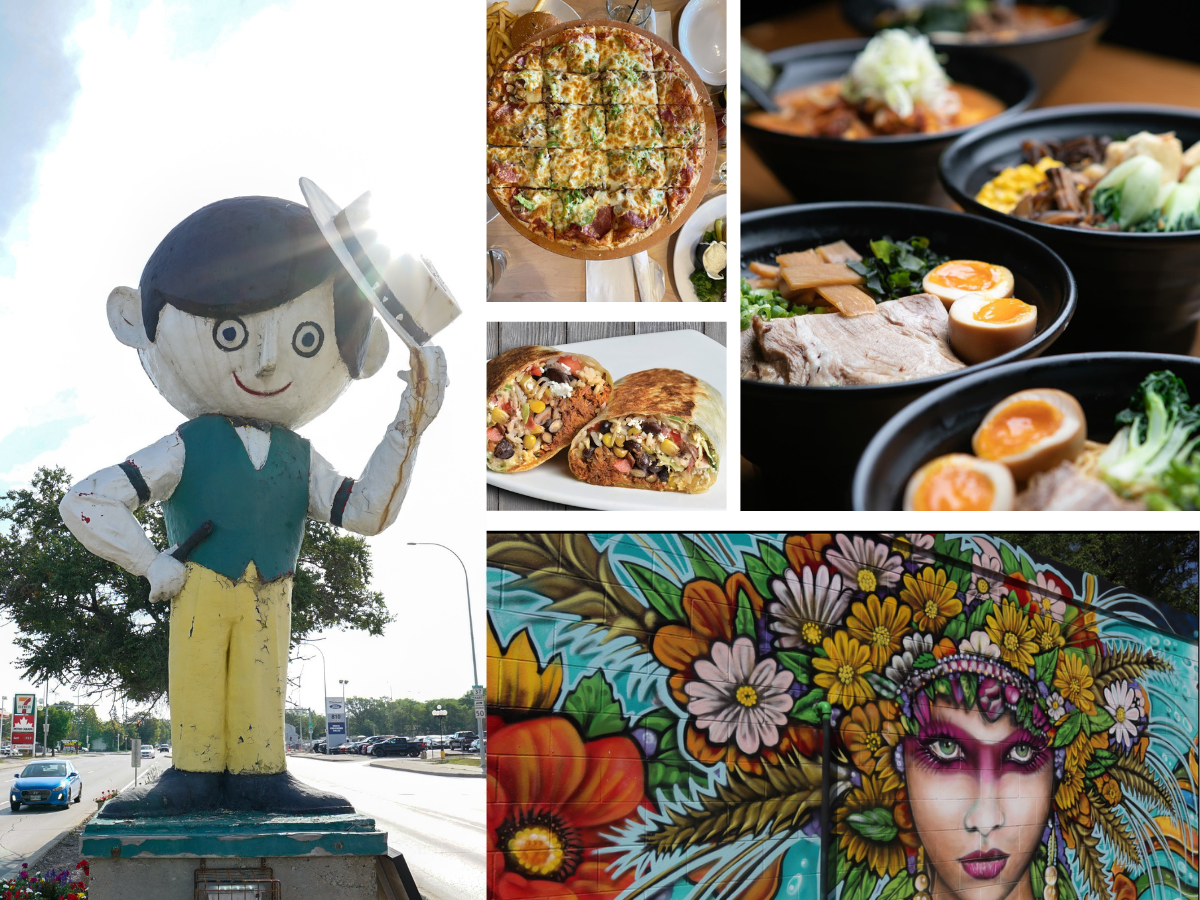 Like so many other Ukranian Canadians in Winnipeg, I have family ties to Transcona: My parents, grandparents and their parents grew up on the blocks surrounding Transcona's original downtown, an area with large trees, a smattering of shops and a small-town feel. In fact, Transcona was a small town, at least until 1961 when it became its own city before amalgamating with the City of Winnipeg in 1972.

I have been happily spending time in Transcona for close to 30 years, hitting up the area's eateries both new and old. Here you'll find babas boiling perogies, a Syrian food stand, and some of the best local burritos.

For the purpose of this article, restaurants have been split into Transcona East and Transcona West with Plessis Road dividing the two.

A family restaurant that's been in business for more than 25 years, Dal's is great for both takeout (try the thin crust pizza, pictured in header) and dine-in (the homemade dressing on the Greek salad is creamy and delicious and its recipe is totally top-secret). Customers also rave about the fried chicken, hot turkey sandwich and Dal's burger.

Started by a Ukrainian baba out of her two-car garage 35 years ago, Sevala's has grown into the takeout spot for perogies, cabbage rolls, meatballs and other Ukrainian delights. It's even been reported that at one point, Sevala's was turning out a million perogies and cabbage rolls on an annual basis. In an interview with the Winnipeg Free Press, owner Del Demchuk (his mother started Sevala's in 1985) said that customers will often phone the store a few days after Christmas already placing orders for next year's Christmas Eve.  And when the pandemic hit last February, customers stockpiled perogies alongside toilet paper and soap.

Sevala's is where my family gets all our perogies for holidays and gatherings. I'm also a fan of the perogy bites—stick to the classic potato & cheddar cheese, or try the added jalapeño for some spice. The deli's current location is also home to the Life Goddess mural by artist Mike Johnston, named the 2018 Mural of the Year by Murals of Winnipeg.

After longtime takeout stand Whistle Pig Drive-Inn closed up shop in 2018 (those fries!) it was replaced by Maggi's, an incredible Syrian eatery owned by a refugee family and offering dishes including shawarma, kebabs, hummus platters, Syrian salad (fresh and flavourful), fries and burgers. The restaurant is open seasonally (typically from April to November) with a handful of picnic tables out front to enjoy your meal.

This sunny breakfast spot has excellent food specials, tasty coffee and a great business model providing meaningful employment to people living with disabilities. Table space is limited, especially on weekends. Be sure to try their cinnamon buns, as they're made in house.

Named after Frank Quinlan, who organized and supervised the construction of the Transcona Shops before enlisting for service in the First World War, Quinlan's opened on the corner of Regent Avenue and Day Street in November 2019. The deli focuses on fresh, housemade dishes like hearty salads, stacked sandwiches and plates of pasta, and is open for lunch and dinner.

One of the popular gourmet burger joint's busiest locations is on Regent Avenue, just east of Lagimodière Boulevard. Its Le Burger Week entry for the 2020 competition was one of the best—a handmade pretzel bun from Gunn’s Bakery topped with honey chili pepper bacon, pounded cheddar cheese spread, sliced cucumber and kale and arugula tossed in a tahini parmesan dressing.

Chef Ed Lam of Yujiro's newest concept sits in an unassuming strip mall on Regent Avenue, but the eatery itself is anything but bland. Here, Tokyo-style snacks and small plates are offered alongside a selection of ramen, noodles and fusion dishes. Japanese whisky, sake-based cocktails and Japanese beers are also on offer.

When the last three Perkins locations in the city closed in 2020, a local ownership group decided to take over, renaming the locations RnR (Rest n' Relax). Branching out from the familiar Perkins breakfast experience, RnR has added both vegetarian and gluten-free items to the menu along with local dishes like a honey dill chicken sandwich, poutine and a Ukrainian breakfast option. The owners have also vowed to source products locally when possible, including using Niverville’s Negash Coffee.

This locally owned, operated and conceptualized burrito chain has one of five locations on Regent Avenue. The eatery offers a ton of things to love—its tortillas are pressed fresh in house using 100 per cent Manitoba produced flour, the adobo chicken (Granny's Chicken), vegetables (Peak of the Market), fish tacos (Manitoba whitefish) and pork are all locally sourced, cans of Winnipeg craft beer are available and the entire menu is free from deep-fried dishes. Pro tip: don't skip the lime-cilantro-cumin Mexi slaw.