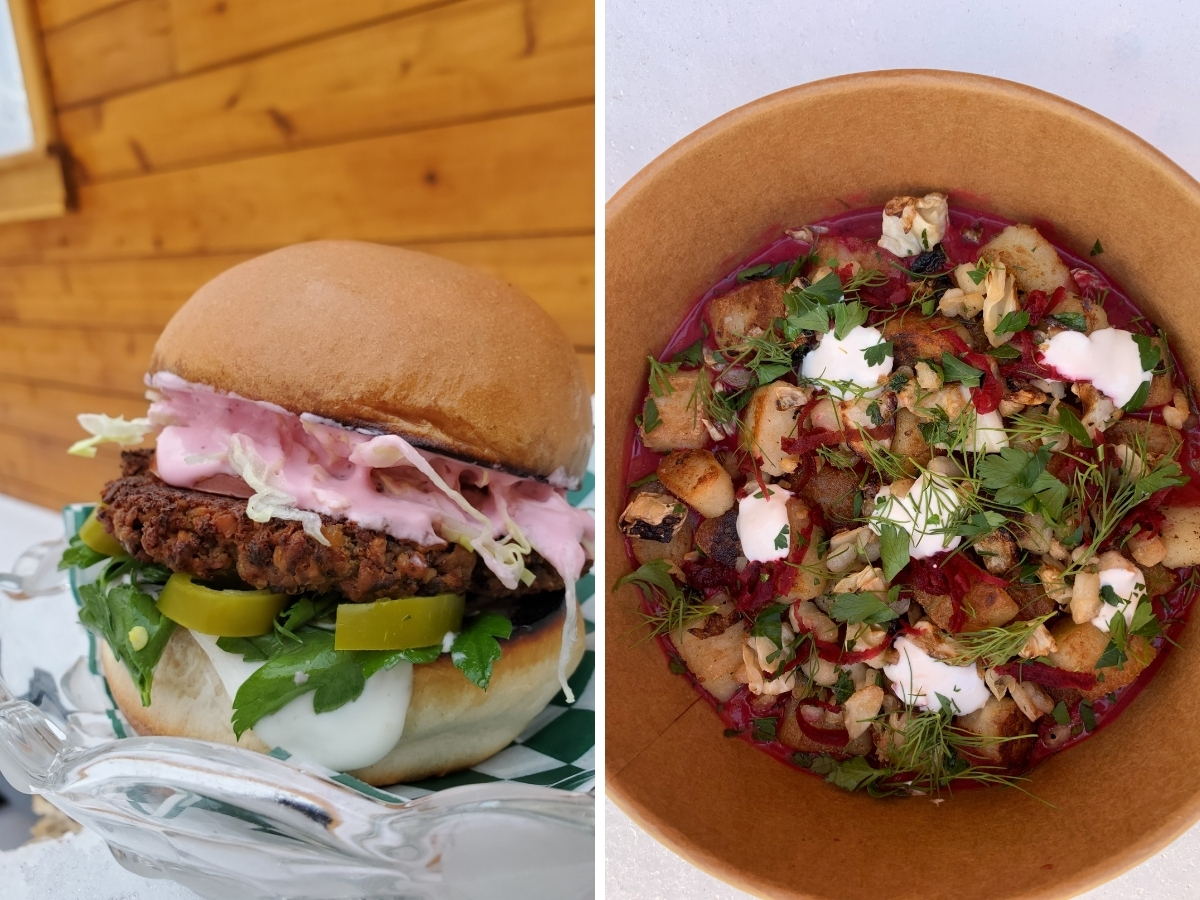 Kermit was wrong—it is easy bein’ green. At least when it comes to vegan dining in Winnipeg.

Since writing our last (now somewhat dated) vegan guide in 2018, five new plant-friendly places have opened, offering everything from donuts to smoothies and colourful cheeseboards.

And for the first time ever, January 17 marks the start of  Le Vegan Week, in which more than 20 Winnipeg restaurants will cook up plant-based dishes for takeout using the theme ‘vegan comfort food'. Funds raised will go to the Good Place Farm Rescue & Sanctuary.

The city’s newest plant-based cafe is the brainchild of one of its oldest.  Thyme Café is run by a founding member of Mondragon, the OG vegan spot in the Exchange District that first opened in the 90s before closing its doors in 2014. For anyone who remembers that iconic eatery, the southern-fried tofu strips have made it onto the menu at Thyme Café, alongside a selection of soups, sandwiches and breakfast items.

This juice bar and eatery, which started in Selkirk in 2017, opened a second location on Corydon Avenue at the end of 2020. Here you’ll find a fun selection of smoothies (try the PB&J with housemade strawberry sauce or the Ginger Spice with lime, ginger and shredded coconut), soups, salads, wraps and bite-sized cheezecakes (the 'z' in cheese meaning it's vegan) in flavours like snickerdoodle, cranberry orange, brownie and blueberry lemon.

You might be familiar with Monuts protein donuts, which are made with a base of rolled oats, brown rice protein and natural peanut butter, making them gluten-free, vegan and free from added sugars. The Osborne Village shop also serves a selection of warm beverages and vegan dishes for takeout, including a grilled cheeze with bacon, BLT and an Italian sub.


Dug & Betty’s Ice Creamery, which opened in St. Boniface last year, serves small batch ice creams in seven vegan flavours. Neon Cone always has two or three vegan options on rotation as well, while all of Black Market Provisions delightful ice creams are vegan, most with a super creamy coconut milk base. Fête Ice Cream + Coffee also makes all manner of vegan treats, including ice cream sandwiches that are so peachy they're plum.

Eiffel Tower Pastry Shop is not a new spot (actually, the bakery first opened its doors on Pembina Highway in 1955), but we’ve only just discovered it for ourselves on a hunt for homemade gingerbread kits, of which Eiffel Tower makes some of the best (generous icing-to-cookie ratio and packed with colourful candies to decorate the structure). The mother-daughter duo bakes everything in small batches by hand and more than 20 of their speciality cakes, cookies and pastries are completely vegan, while pretty much anything else can be made vegan by request.