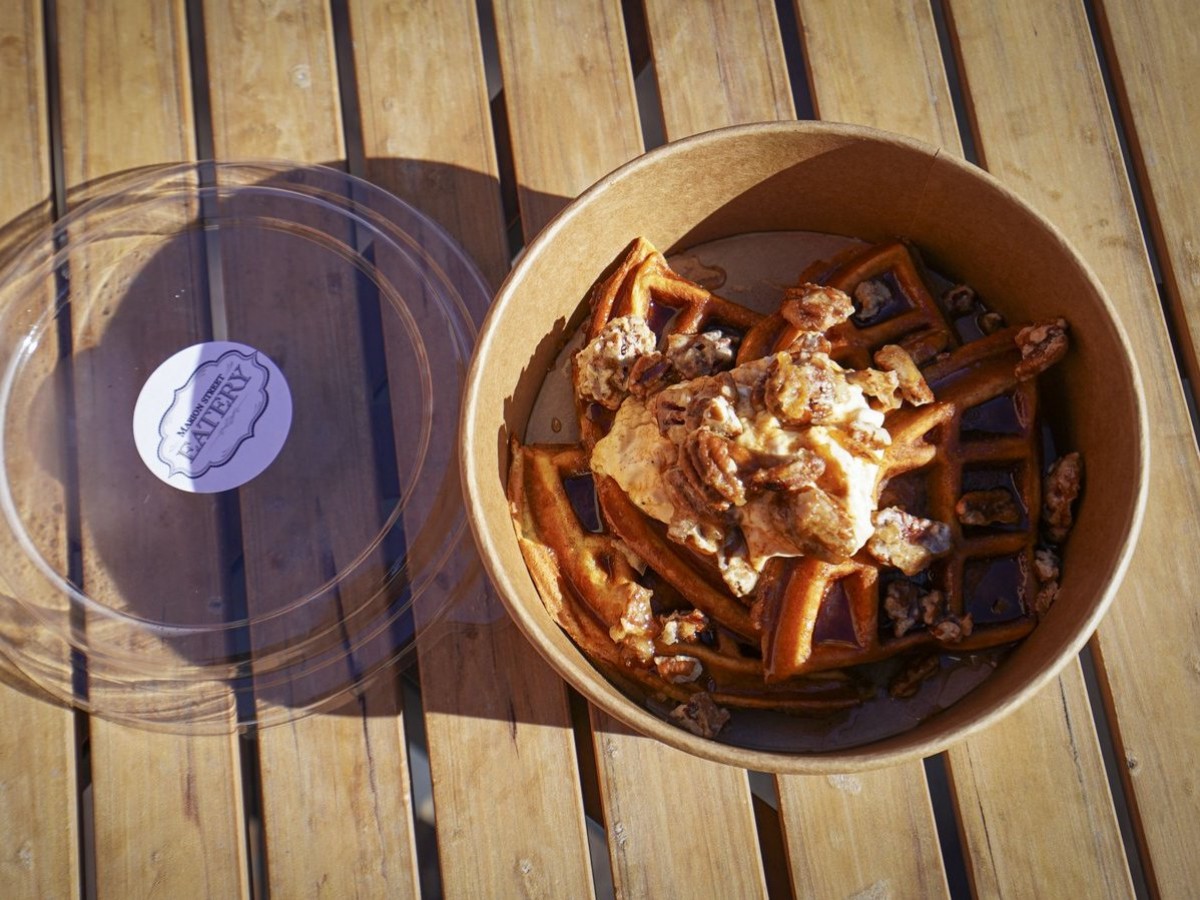 Don't waffle when it comes to Winnipeg's waffle options

Batter up! We have another great glutenous list that we’re about to iron out for you as part of our November series celebrating, “Carbs so you can eat your feelings.”

Winnipeg doesn’t waffle when it comes to waffles. Batter up - find these at Tea Story Cafe and Marion Street Eatery. ##winnipeg ##waffles ##manitoba

♬ walk but in a garden - Llusion, mxmtoon

While the city’s latest craze is surely bagels (which we are here for because holy, Bagelsmith and Hudson Bagel have that game on lockdown), we want to ensure you are also not forgetting about the original gold standard for fun with flour - the waffle.

Here in Winnipeg, our favourites represent a host of countries and styles, with the common theme being these are all delicious waffles (some are even gluten-free and vegan) -- no matter what one of our entrants will tell you -- while you can, of course, get all these delicious numbers via pickup.

Plus, we’ve shared our own recipe for really great gluten-free, vegan Norwegian-style waffles at the bottom, because we care.

If Talia Syrie, Winnipeg’s comfort food queen, was to take the fried chicken and waffles off the menu at her restaurant, The Tallest Poppy, customers would most likely start flipping tables.* They’ve been doing this dish for ages and it remains the top seller as the fried chicken and waffle work together like Chewy and Solo. As to the waffles, they are neither too rich, nor too sweet, with just a hint of vanilla that works more like the Millennium Falcon to get the crispy bird where it needs to be (ie. in your mouth). Syrie jokes that, “The thing that really makes the waffle, is the waffle iron,” which is the most figurative and literal quote I’ve ever taken. What she means is The Poppy kitchen utilizes a giant, super heavy European-imported waffle iron that simply gets way hotter than a normal iron and thus makes a beautifully crisp exterior while keeping that interior puffier than a cloud in a René Magritte painting. (And yes, that is a Belgian painter reference because, after all, this is an article about waffles.) *Don’t worry, you’d never actually see someone flip a table at The Tallest Poppy, all their regular patrons are lovely.

The North American dictionary definition of “waffle” – to “fail to make up one’s mind” – does not apply to Tea Story. This Osborne Village gem does not waiver when it comes to what to do with its yeast-batter waffles, as they simply do everything with them instead. Savoury waffle sandwiches like chimichurri chicken and tofu coconut curry? You bet your batter! Waffle BLT with thick slabs of honey ham? Too easy, and super delicious! A full page of Belgian-style dessert waffles? Indeed! Including a banana cream pie covered in caramel drizzle. Outside of the deep waffle iron, they also do waffle chips served with house-made guac, hummus and salsa. Pretty much, if it can be done with a waffle, they are doing it here, with the opportunity to swap out their traditional sweet or savoury batter (which is fluffy in the middle, crisp on the outside with plenty of squares to catch all those sauces/flavours) with a gluten-free vegan one that is none too shabby either.

Just going to put it out there and say this is the best straight-up waffle in the city. These Liege waffles are yeast leavened, giving the waffle a texture much like a cake doughnut, with an extra chewy-yet-airy texture. Plus, they are rolled in pearl sugar before cooking, so you get that sweet caramel flavour. You can get these waffles topped in many different ways with the banana split waffle – served with a brûléed banana on the side and plenty of whipped cream, being perhaps the choicest number.

The city’s best brunch spot (which may just be the country’s best brunch spot too says  The Globe and Mail) is obviously going to have a top-shelf waffle. While the Brussels-style waffle at Clementine is pretty great in itself being (just crispy enough at a toasty blonde and having plenty of syrup-begging squares), this number is admittedly all about the accruement. This often involves a whipped creamy element (be it mascarpone, yogurt, etc.) berries and crunchy toasted nuts or cereal. The current incarnation might be the best one yet with its voluminous offerings of lemon curd and whipped cream topped with macerated strawberries and lemon poppyseed milk crumble.

This absolutely adorable Korean restaurant in St. Vital is all kinds of amazing. Aside from fantastic, whimsical takes on dishes like bulgogi bibimbap, Tteok-Bokki and all kinds of okonomiyaki, this place also does a first-rate buttermilk waffle. The round waffle itself if fluffy and tasty on its own (you can get one straight up for just $5.50), while the big seller is the amount of stuff that they artfully place on top of it when you get the dessert version. Both the banana and berry waffle come with all the fixings, like whipped cream, chocolate syrup, sugar or cinnamon powder, while the kitchen really takes time to decorate the fruit. For $14.95 you can go big with a four-layer waffle tower that pretty much features all of the above, along with grapes and blueberries too.

A mighty fine brunch place should always have a mighty fine waffle, and Marion Street is no exception. This waffle’s toppings seem to change with the season and currently it is an absolute show stopper, buttressed by house-made pumpkin cream cheese, maple-candied pecans, brown butter and spiced honey. It’s like all the best things about fall in waffle form. Plus, the waffle is both crispy and fluffy, so what more could you ask? In sum, this is the best all round waffle experience (taking into account the waffle itself and the toppings) going right now in Winnipeg.

One of the few places in the city with a full waffle menu featuring massive Belgian-style waffles of the sort that Chimes in the Westin – the inspiration for this list – used to serve. (A quick note on Chimes: It was the breakfast restaurant in the Westin (now the Fairmont) and it had plush turquoise chairs and a circular mirror on the ceiling so you could see what everyone else was eating – usually huge waffles - by looking up. If you ate there as a kid in the 80s (like I did) you couldn’t help but be enchanted while growing obsessed with Belgian waffles.) Anyway, outside of the whipped cream and fruit-laden classics, Pancake House does a nice job with a healthier and heartier spelt flour waffle topped with yogurt, berries and granola, along with the Hemp Brownie Waffle (also made with spelt, along with hemp seeds) that is finished with a scoop of coffee ice cream, whipped cream and caramel syrups. Bonus: all its waffles (minus the spelt ones) are available gluten free and that gluten-free batter rocks says all our celiac friends.

This Corydon Avenue spot could be on almost every list we write, simply because they do so many things - like mixology-inspired shakes and drinks, rolled ice cream, and ice cream sushi and tacos (don’t worry, fish-free we swear!). When it comes to waffles, this place pops (ha!) in that they literally serve you waffles on a stick. The waffles are ironed to order then covered in all manner of merriment, like sugary cereal and smashed Oreos all held together with marshmallow fluff.

These guys, we tell ya… Sure, we are willing to admit that their delicious fish-shaped Taiyaki cones are not technically waffle cones, but they also serve those great Hong Kong-style bubble waffles (aka egg waffles) that you can’t find anywhere else in the city. These beauties are crispier than any other waffle on this list, while the inside is airy and filled with tasty bits. You can go sweet and elect for fillings like caramel chips, chocolate chips, or the Nutella Banana Bubble which comes folded around an ungodly amount of whipped cream; semi-sweet with mochi or sweet red bean flavours; or full-on savoury with the mozzarella cheese bubble waffle, where each crispy pocket equates to gooey goodness.

Because Norwegian waffles are underserved on this list (normally we’d include events at the  Scandinavian Cultural Centre (aka Viking House) but they are not doing these right now due to COVID) and Mike has done some cooking on CTV and used to do this for CBC all the time, we are doing a PCG first and sharing a recipe below.

Break out that heart-shaped waffle iron and plenty of medium-sized bowls and your hand mixer/egg beater (the below recipe makes about 8 waffles, enough for two adults and an insatiable 3-year-old named Sebastian).

Method
-Mix dry ingredients in a large bowl
-Separate egg whites and yolks into two bowls, then whip egg whites to stiff peaks with a beater
-In egg yolk bowl, add the whole can of coconut milk and whip that too until it becomes super creamy and lighter. Then, add the vanilla to it and the maple syrup and mix again.
-Mix these wet ingredients into the dry ingredient bowl and whisk again. Once fully mixed, fold in the fluffy egg whites (this move is important as it will make your batter crispy-yet-airy).
-ladle batter into your hot waffle iron and cook to your desired crispiness. Keep finished waffles warm in oven until the whole batch is done.

Please note: You are not allowed to make this recipe if you are going to serve these waffles with fake maple syrup. Local Notre Dame butter should also be in order for your toppings.