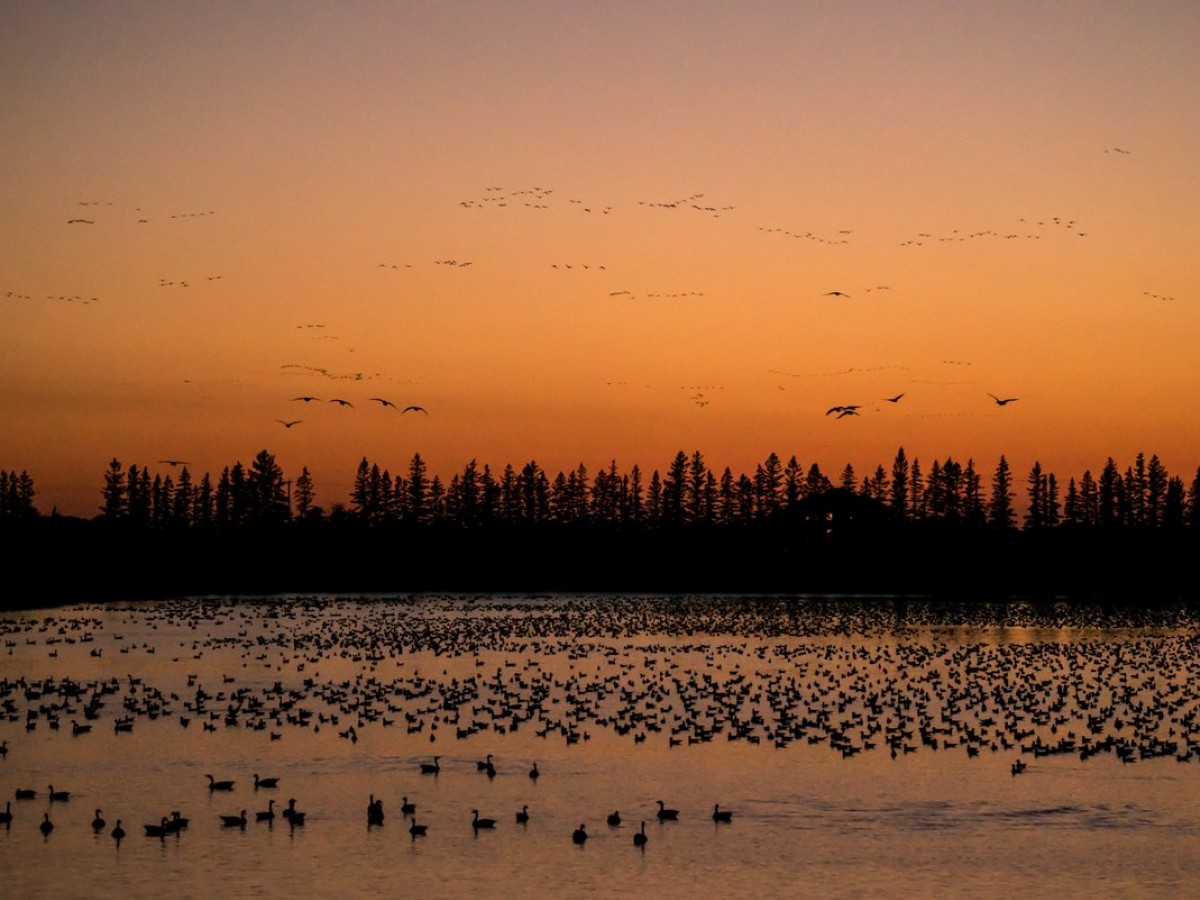 Dinner with a view? You can't beat this dining ambiance this fall at FortWhyte Alive (photo courtesy of Travel Manitoba)

“So fair and fowl a feast I have not seen!” might remark Macbeth, were he to attend FortWhyte Alive’s annual Goose Flight Feasts.

The event is a true banquet for the senses, combining the sights and sounds of migration season with a delectable three-course seasonal meal – which this year will truly make you happy as a lark because SMITH’s culinary team is doing dinner.

And by lark we of course mean the horned lark, the only type of lark who may be found at the birder’s paradise that is FortWhyte Alive (FWA). And while larks may admittedly be uncommon in Winnipeg, we would implore you to spend some time in the afternoon at this gorgeous setting before your seating, where more small migrating species may include cedar waxwings (those entertaining rascals), sharp-shinned hawks (terribly handsome), Forester’s tern (they're fun), and perhaps even a ruby-crowned kinglet (#besthairdo)!

That said, this event is all about the big winged wonders, namely Canada Geese, mallards, tundra swans, pelicans, mergansers, etc., who descend on FWA’s Lake Devonian in the thousands at dusk, after foraging on the surrounding fields.

It’s an incredible sight that you'll take in from FWA's migration viewing greenspace; one replete with a symphony of wings flapping, plenty of bills honking, and that soothing sound of fowl feathers contacting the water as they land.

To make it even better, you can follow up this spectacle with a farm-to-table culinary experience whose focal point is the surrounding prairies.

It’s the first time FWA has teamed up with SMITH, a place noted for its fine craftsmanship and seasonal menus. And as you’ll see in the above pictures, these menus (one runs until October 3; the second from the 7th to the 17th) are primetime for fall time.

The current menu (all pictured above) features such luscious fare as a creamy wild mushroom soup with caramelized onion; braised chuck short rib (SMITH always does a fine braise, with a resulting sauce that will make you want to lick the plate); a classic pairing of seared duck with cherry gastrique; that new classic pairing of cauliflower steak with smoky, mildly spicy harissa; and northern pike - a fish that is tragically underused, particularly as it has a deeper flavour than local walleye, which will be presented in a cornmeal crust topped with a caper and lemon buerre blanc-style sauce that will round out that fish’s fatty nature with brininess and acidity.

The later menu gets even more robust, with a soup of sweet corn, spicy sausage and chili oil or a seasonal salad to start, followed by four main options that include new dishes like a wild boar chop with red grape, and Arctic char (Manitoba raised) with maple Dijon glaze. The new dessert for this later menu is strawberry rhubarb crumble with house-made vanilla bean ice cream.

Each menu has several gluten-free, vegan and vegetarian options too.

And while we are talking of SMITH, there’s two things you should note coming out of their Inn at The Forks kitchen this fall:

First, is this new harvest menu that will run throughout October. It has some new dishes including a Manitoba-inspired Waldorf salad (which really is the most under-utilized salad, despite what Basil Fawtly will tell you), braised lamb shank, and Muscovy duck breast served with the two best sides in the business – that being caramelized Brussel sprouts and potato pave (because buttery slices of potato stacked on top of each other to form a cake is the highest form of spud).

Second, is that SMITH is doing full takeout turkey dinners for the long weekend, which you must order by October 7. You can get these full meals portioned for eight to 15 people, with all the fine fixins’ like sage and onion stuffing, house-made cranberry sauce, buttery mash, and pan gravy, with the option of adding wines too. The menu is available here, and you’ll see it also includes a la carte options too.

Goose Flight Feasts are on now until October 17, Wednesday through Saturday. You can easily book your table online here, with three nightly seatings (5:30, 6:15, & 7) on offer.