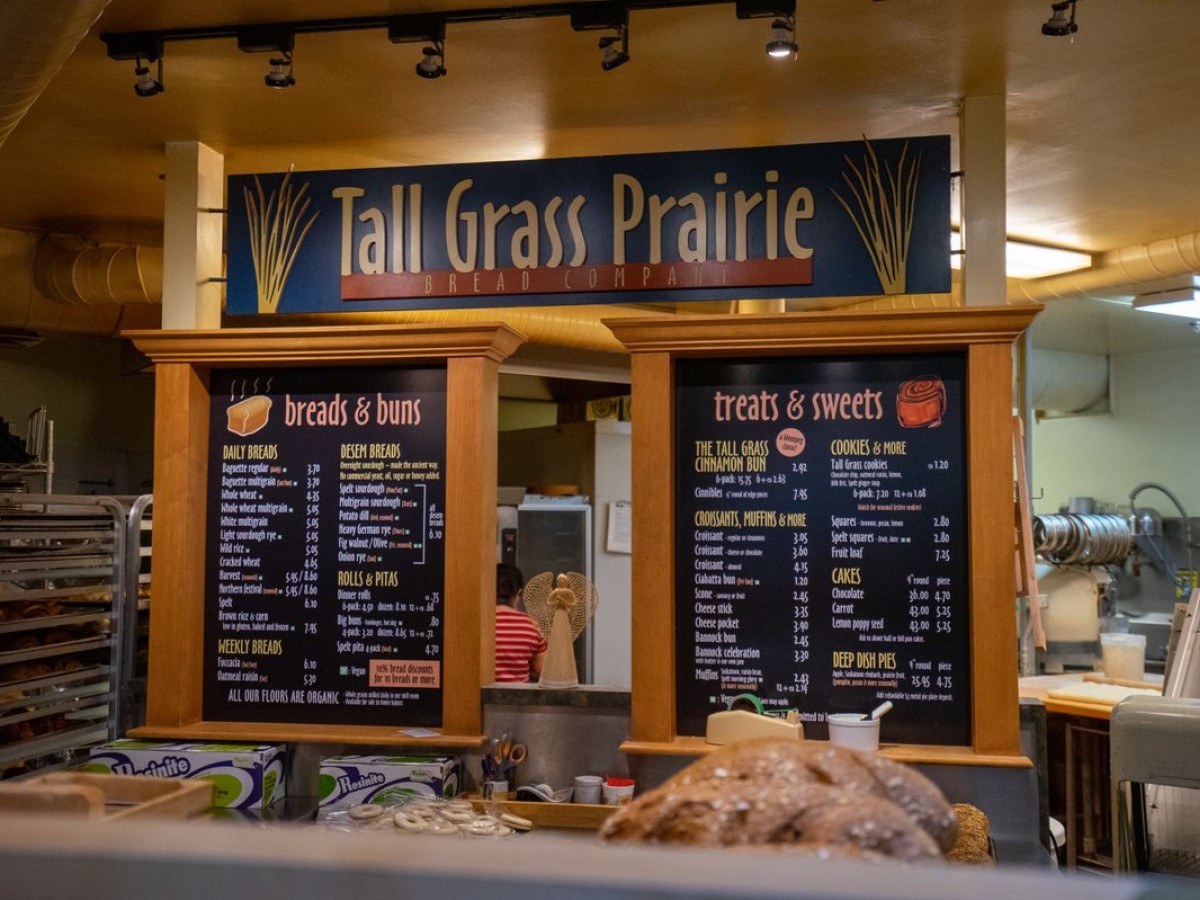 Hear the story of this pioneering bakery from one of its founders, Tabitha Langel

Since it first opened its doors on September 8, 1990, Tall Grass Prairie has been a success story on so many levels – despite what the bank originally thought.

The mission for Tall Grass has always been, first and foremost, to support small-scale organic farmers; second, to help change people’s perspectives as to how food should be grown, how it should be made and how it should taste.

In early 90s, this was a radical idea.

“Back then, only two cents from the sale of a conventional loaf of bread goes back to the farmer, so we decided to do something about that,” said Tabitha Langel, the co-owner and co-founder of Tall Grass Prairie.

“We went to the bank because the bank always says if you have a good idea, come. Well they said, ‘That won’t work because Manitobans are cheap and don’t care about small farmers,' said Langel, referring to how their bread would cost much more than your regular grocery store loaf.

“So the bank didn’t give us any money but people in the street did. Because by then we were [already] baking in St. Martin’s Church basement and had started a neighbourhood bread co-op. And the bread was absolutely delicious and it was an amazing experience,” said Langel.

“We started from a philosophical basis -- that was the difference. But once people had that loaf they said, 'I always wanted that loaf.' So the bakery became available and off we went,” finishes Langel, before quickly adding, “But on that note, two years ago that bank came and apologized, and said please give us another chance!”

The founders of Tall Grass Prairie are Tabitha and Lyle Barkman, along with Tabitha’s husband Paul and Lyle’s wife Kathy.

On that first day they opened, as you can hear in the above video, everything flew off the shelves in a manner of minutes.

The pioneering bakery has been milling wheat onsite since day one at the original Wolseley location, while in 2002 they opened up an even larger bakery at The Forks Market. Afterward, they opened Grass Roots Prairie Kitchen right beside it, where you can buy ready-made meals, soups, salads and freshly pressed sunflower oil.

Every day at The Forks you can watch locally grown heritage wheats like Spelt (their main wheat),  Red Fife, Kamut and Eikorn (which Tabitha jokes they are “flirting” with because the price is so high due to demand in New York and low-yield in the field) get milled before being turned into all manner of breads and baked goods.

In 2005, a fifth-generation baker from Brittany, France named Loic Perrot joined the team, helping perfect their croissant recipe (although he says, “The technique is more important than the recipe,”) along with adding many French pastries to the menu.

Perrot originally moved to Winnipeg in 1989 after answering an ad in a Brittany newspaper that was placed by Winnipeg bakery Le Croissant’s original owners. He became a partner in Tall Grass in 2014. We will vouch for how perfect his croissants are – particularly when you get a cheese croissant stuffed with Bothwell’s smoked cheddar first thing in the morning when it is hot out of the oven.

Other past partners included Sharon Lawrence, a scientist from the Experimental Lakes Area who passed away in 2015.

“She really was a very important voice, as she knew all the implications of herbicides and pesticides on the environment,” said Langel.

As well, there was Ray Epp, who married a Japanese woman and moved to Japan.

“He brought a lot of philosophy from a place called The Land Institute… and he now runs a wonderful organic farm in Japan,” said Langel. There's also Nancy Pauls, “Who was the mom who did the books.”

Below, you’ll find a few choice anecdotes from Langel about running the bakeries these past three decades, including how they’ve influenced the Winnipeg baking scene, how they continue to help and support local farmers, and what they’ve been up to during the ongoing pandemic.

Why Wolseley was fertile ground to start Tall Grass Prairie

I really do believe that Tall Grass is what happens when a community starts. A huge influence for us was Wolseley. Where Organic Planet is now, there used to was a thing called Harvest Collect. Harvest Collect was this combination of food radicals – and we learned a lot of food politics there. To buy there, you had to volunteer or you paid higher prices.

Almost everyone in the neighbourhood who was into that kind of thing volunteered there [in the 80s]. I remember being totally mesmerized because I would work shifts with young radical Marxists, and then a philosophy professor who cared about food because he wanted it the way his grandmother made it.

Food was big discussion and it was a wonderful place. And I really want to credit the Wolseley community and its embracing of diversity for making the bakery happen.

On employees and how they’ve influenced the Winnipeg baking scene

Because of the long [and irregular] hours, we hire a lot of students. And what I really love in Wolseley and here [at The Forks] is that we are a first job for people. We’ve had people stick with us for four years – all the way through law school, on their way to music degrees – and they are now scattered all over the place. But if we need help, we can still call them. Most of them are now parents with kids but we’ve stayed connected.

A lot of the new bakers [in Winnipeg] like  Sleepy Owl and Pennyloaf are people who worked for us. And that’s our version and vision of franchise. We always say to people, “Yes, go and do it!”

From the beginning we decided to share our recipes. There’s no secrecy – all these recipes go back to grandmothers – so we just say, “We can’t sell it but you can have it.”

Note: During this part of the interview, Langel also gave a special mention to Hildegard’s bakery for being the only 100 per cent organic bakery in town that also mills its own wheat onsite.

On the pandemic and their special relationship with staff

For me, the terrifying piece was that we hire quite a few immigrants from Burma [Karen/Kayin people] who lost their land there. They really are farmers and my fear was their jobs…can we keep on all the staff?

Before we started the bakery, I worked for the federal government for women’s employment counseling in the 80s. And what I found difficult – coming from a Hutterite Colony where we were a minority and English was my second language – I found it very frustrating when people said, "They need to have good English.” Well, how are they going to get it? So, when I started the bakery I decided that for new Canadians, this should be a place where they can learn English. And we knew our customers were a perfect fit; they are people who are aware and would support that. And they have.

Sometimes I wish I could put up a sign: We are not just hiring people at minimum wage…A livable wage is always our goal… These are farm people who love working with food and we love their work.

So, we took that first weekend off to see if we can rebrand. We very quickly [at Wolseley] went to curbside pickup and delivery [because the inside is too small]. Here [at The Forks], we were shut down with three hours notice because this is a federal building. So that was a hard three days. But then there was the joy of giving our stuff to soup kitchens. And throughout that whole period, we supported food hampers – that was great.

During this we were overwhelmed by the customers' responses. The owners did most of the work, we just hired two staff and we were deeply grateful for CERB.

Wolseley reopened first… and once we had everything in place, we pretty much hired back 70 per cent of the staff. Only a few stayed on CERB, while now there’s only one mom who stayed on CERB and that is mainly to do with daycare.

It’s quite wonderful to be 30 years because we’re now hiring the children of our former staff. And that’s special.

I speak for all the owners when I say that we are tremendously grateful to all the people of Winnipeg and Manitoba to be making this commitment to supporting these farmers. We always tell people to take a look at this map [located beside the bakery in The Forks,] which lists all the farmers, and some of these farming families we have been working with for over 20 years.

A few years ago, there was this new thing in global trade and all of the sudden there was such a demand in New York for organic grain. All the farmers that we deal with were offered the chance to get double of what even we were paying for their grain… And the farmers said to us, "We’re torn."

And we said, “You know what, your job is to look after your families and the land. Do what you think is best.”

Because we pay fair prices we could probably still get organic grain – but not one of them went for it.

Loic is all about sourdoughs, but he said he hadn’t realized that it’s easier to get a healthy starter from fresh-milled flour because everything is there.

So his line is, "I’m more interested in a healthy sour, than an old sour."

However, we have been given gifts of starters. One of our former staff went to Iceland, who is now very famous in Europe for her sourdoughs, and she brought us a gift of a 400 year-old-sour, which we use. We also exchange [starters] with others too.

During the pandemic, we gave away so much free sourdough starter. We have three: we keep a whole wheat, a rye and a spelt; we also sold so much flour.

I think we really want to encourage home baking. We always say once everyone bakes their own bread again, we’ll find something else interesting to do.