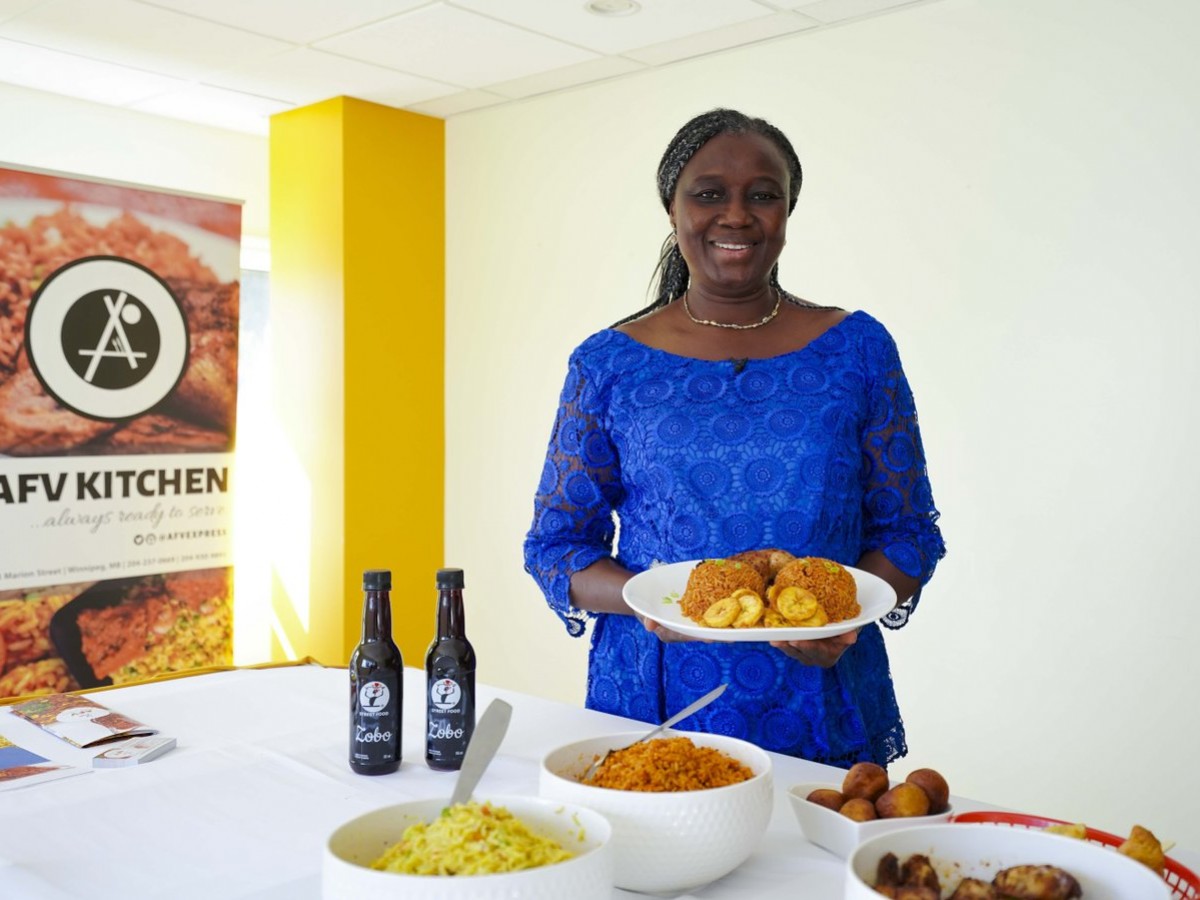 “What brought me to Winnipeg is two fathers,” said AFV Kitchen owner/chef Folasade Akin-Akinbulumo, who is originally from the Osun State in Nigeria.

“The father up there - God, and the other father literally up there [points to the ceiling], my husband, whose law office is upstairs,” she continues with a laugh.

Folsade, along with her husband Abimbola Akin-Akinbulumo and their three children moved to Winnipeg on January 2, 2013.

“I remember coming out of the airport [in Winnipeg] and all five of us started coughing, because the cold hit our lungs like ‘boom!’”

They first left Nigeria in 2002, spending 11 years in Maryland before deciding on Winnipeg.

“In Maryland, our kids would pray for snow,” Folasade continues. Needless to say, here in Winnipeg, their prayers were answered.

Abimbola had practiced law in Nigeria, which like Canada, is done under the British system but couldn’t in the US. After they arrived in Winnipeg he immediately began studying for the Manitoban bar, while she started working at St.Amant, having previously been a nurse in the US. While studying, Abimbola also started working at St.Amant as an aide, as he too had a nursing degree and had practiced while they were living in the US.

In Nigeria, Folsade – a woman of many talents to say the least, she also has a degree from her home country in management science – had also run a successful mini-mart within a shopping complex, buying local produce and meats and turning it into dishes for customers.

It was this previous experience, along with being implored from her kids and members of the Nigerian community here, that she decided to open AFV Kitchen as a small grocery store and take-out restaurant on Marion in 2015, while Abimbola opened up his law office upstairs.

During the first two years she continued to work nights at St.Amant, followed by two hours of sleep, then on to the kitchen at AFV, which was open for takeout and delivery.

Business was steady, but it wasn’t until 2017 that Folasade really found her stride through an opportunity at the University of Manitoba.

It started after she was offered – after much persistence she adds – a chance to run food for a semester out of the Flex Station at Campo, which provides an opportunity for local restaurants to find a new customer base on campus.

Immediately it became super popular – the restaurant was selling out of 14 hotel pans of jollof rice, along with eight pans of Nigerian fried rice per day.

“At the start of the school year I could never keep up. Most days I would send 22 pans and they would be gone… the line would just wrap around,” said Folasade.

After that first semester, AFV Kitchen was voted in by students and staff to have a permanent spot in the food court, where she continued to fly through dishes that also include asaro (a yam porridge she makes when in season), asun (goat roasted then cooked down in scotch bonnet and bell peppers), roasted tilapia (when available) with peppered gizzard, and okro (okra) soup and egusi soup (made using ground melon seeds), both of which are served with pounded yam.

Folasade considers most of the dishes she serves as broadly West African, specifically as her most-popular dish – jollof rice – cuts across the region. “It originally started in Senegal, but each country has made it their own,” she said.

She admits the occasional complaint she gets from her Nigerian customers is that her jollof is not as spicy as it would be back in Africa, as she tends to tone down the recipe for local tastes. That said, the dish still has a nice bit of heat, which continues slowly as you eat the fluffy rice. It’s also very comforting, particularly when paired with goat and fried plantains.

Her Nigerian version utilizes tomato, scotch bonnet (when available, if not she’ll use habanero, or other hot peppers), red bell pepper, and spices, which are all cooked down to a paste. It’s very aromatic, which is something that she attributes some of her early success at U of M to as the students, teachers and staff would follow their nose once they entered the Campo.

By fall semester 2018, Akin-Akinbulumo had stopped running the Marion Street location altogether, as U of M had proved so popular and she didn’t want to spread herself too thin.

She’d still be at the university today, were it not for COVID-19 shutting down the campus.

At the university she had four employees, but now back at Marion, which officially reopened on September 12, it’s back to just her and some occasional help. Everything on the menu is available via takeout, while you can get city-wide delivery through Skip, Uber, DoorDash, Foodzinga and the new food app, Afriketeats.

“To be a success, you can’t just cater to your community, you have to reach out beyond, and that’s what I’m trying to keep doing now outside of the university,” said Folasade.

This demand for her food from beyond the Nigerian community has surprised her own children.

“One time here I catered a wedding. So, I had my kids drop off the jollof rice. In their mind one person in the wedding had to be Black. And they got there, and groom and bride were white. And my kids were like, “mum, you’re doing the food at this wedding?!?” And I said yes!

“We were the main dish and that’s what I want to continue to do – that’s my aim.”

If you are unfamiliar with West African food, AFV Kitchen is ready to welcome you with open arms and heaping plates.

“People say I know you cooked this with love, and that’s the truth,” said Folasade.

“My husband, my kids, we all eat the same dishes I sell. You are getting the same home cooked food and I don’t compromise on quality.”

AFV is located for takeout at 523 Marion Street, right across the street from Happy Land Park (providing a great spot to picnic). It is open Monday through Friday 12 p.m. to 8 p.m. For more on city-wide delivery and menus, go to the website here.