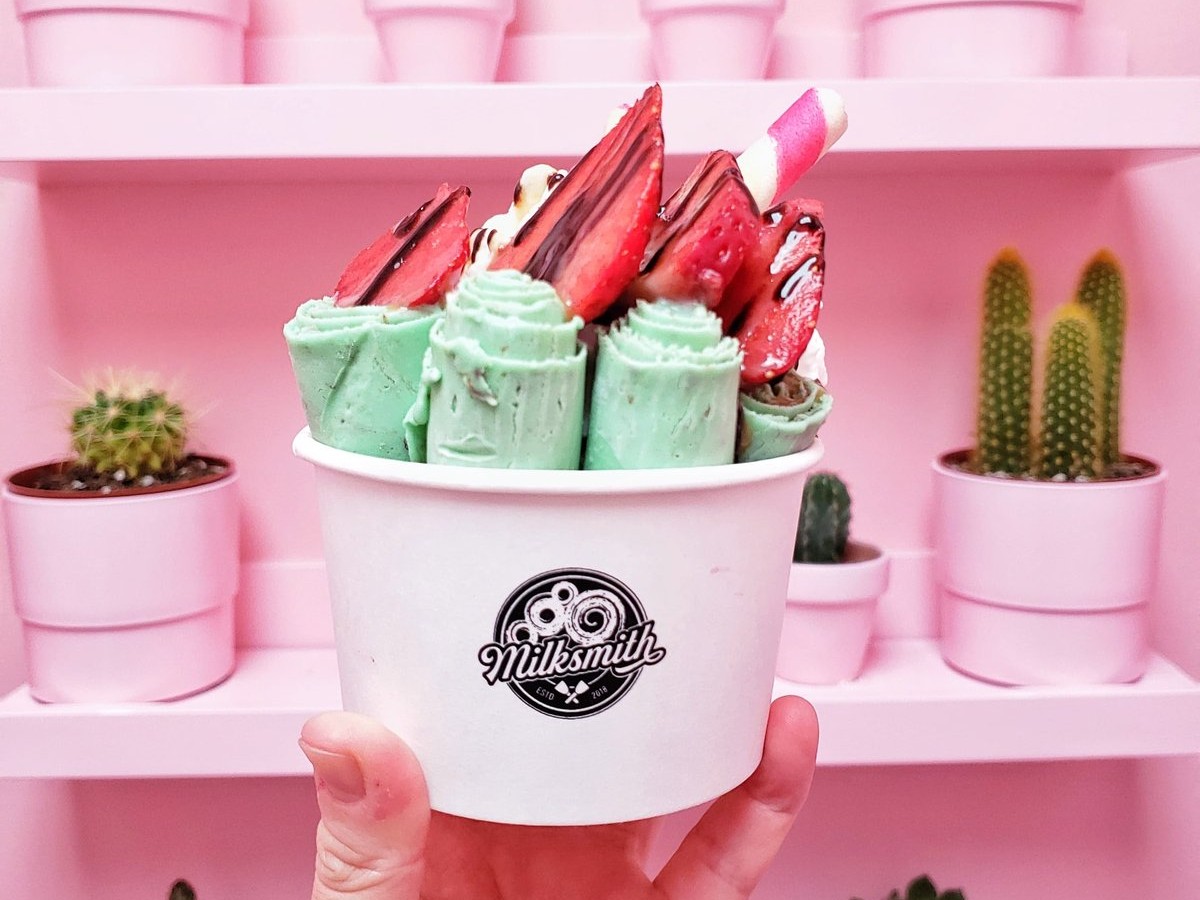 Because really, we all deserve an indulgent treat this summer

We’ll scream for ice cream. Pontificate for popsicles. Holla for halo-halo. Shout for shakes. Growl for gelato. Talk (loudly!) for taiyaki… and hopefully you will too after reading our 2020 summer cool treats guide.

Here’s some of our favourite spots to chill at this summer where the creations are ready for your Insta and the milkshakes are so good that you’ll be eyeing up your friend’s (but remember: right now nobody should be sharing! So please do get your own).

Milksmith – Mixologists, owner Siuleen Leibl and beverage director Dustin Nguyen dream big at this Insta-ready spot on Corydon where the creations are akin to molecular gastronomy. It’s like the wildest stoner creations, but executed perfectly with great visual appeal. Ice cream tacos using colourful housemade waffles as the shell, waffle pops dunked in candies, Thai-style rolled ice cream, ice cream sushi, milkshakes and drinks using flavoured foams and smoky looking CO2 are all on the menu at this pretty-in-pink spot that opened in February 2019. Of note for summer 2020 is a collaboration between Milksmith and High Tea Bakery called the Milksmith Imperial Cookie that uses High Tea’s acclaimed Imperial cookies all smashed up with almond ice cream and plenty of fixings on top.
651 Corydon Avenue

Chaeban - Joseph  Chaeban  and Zainab Ali  (he develops the ice cream, while she is the master of flavours) were the 2018 Western Living Foodies of the Year winners –scoring the honour the first year they opened. The texture of their ice cream is outrageously smooth, while the flavours are always so luscious and inventive, including the city’s most indulgent number; the now-legendary Salty Carl. Due to the pandemic, Chaeban’s doors are currently closed, but you can still get their ice cream at locations throughout the city along with free delivery to Chaeban Ice Cream Club members.
390 Osborne Street

The Supreme Ice Cream Shoppe – Assemble your ice cream crew because The Big Daddy halo-halo at Supreme is four litres! That’s four litres of layers to dig through, with all that shaved ice, ice cream, sweetened beans, fruits and evaporated milk. On top of that, Supreme does it all, including numerous flavours of bubble tea, iced lattes, gelati, and hot savoury Pinoy dishes too.
1295 Jefferson Ave

Dug & Betty’s Ice Creamery – From the fine folks of InFerno’s Bistro comes this shop, which just launched in 2019, where the housemade ice creams don’t play it safe to often stunning results (here’s to you strawberry honey balsamic pepper!). This place also accommodates everyone, including pups (the place is named after chef Fern Kirouac’s basset hounds after all), little kids can find plenty of candy-inspired flavours, there is something for ice cream sandwich enthusiasts, while adults can enjoy with their beer floats and a great wine and beer list. They also serve savoury bistro items and have a great patio too.
309 Des Meurons Street.

Fête Ice Cream & Coffee – Another new kid on the block (it just opened at the end of 2019), this charming little spot located beside a dog park excels at making super smooth ice creams without always having to rely on milk. Co-owners Élise Page and Teri-Lynn Friesen serve a number of interesting and flavourful options, many of them gluten and dairy free while utilizing bases like oat milk and coconut cream. That said, dairy enthusiasts will relish fun flavours like Mini Egg, Tim Tam Slam (which anyone who has backpacked Oz will go for) and Churro – which is infused with churros fresh from Sargent Taco along with sweet cream and cinnamon.
Unit B-300 Assiniboine Ave. Contact-less pickup available

Sargent Sundae – A classic Winnipeg play is to pick up a cone or some kind of elaborate creation at this spot, then stroll across the bridge into Assiniboine Park. People have been doing this since 1984, sauntering over the Assiniboine River Park Bridge with a malt, shake, sundae or cone of hard serve scooped up onto an old school cone.
2053 Portage Avenue

BDI – If you don’t include Bridge Drive-In in an ice cream guide you lose your Winnipeg status – it’s a fact, and for good reason. This place (actually make that places, since on top of the iconic Jubilee location there is also the kiosk in Kildonan Place and a food truck) is the home of the Goog – that mythical milkshake sort of concoction with blueberries, bananas and hot fudge (BANANAS indeed!) and the Sleeping Beauty, which sees all manner of ice cream served in a half pineapple. It was established in 1957 and shows no signs of stopping.

Rollesque – Winnipeg’s original Thai-style rolled ice cream can be found in two of three Pho Hoang locations – the original on Sargent and the gorgeous new spot in Osborne Village. The flavoured creams are spread out and mixed right before your eyes on the super cold surface before being rolled up and put into a cup – a joy to watch being assembled and then eaten. While you are there, you can also treat yourself to some of Winnipeg’s best Vietnamese food too courtesy of the affable owners, Tom and Heather Hoang.
6-794 Sargent Avenue and 117 Osborne Street

The Icing Castle – We love the Mario World-meets Adventure Time aesthetic of this place that also just opened in summer 2019. It specializes in halo-halo, bingsu – a Korean shaved ice treat that is sometimes served in a show-stopping half watermelon, along with many other kawaii creations. They also do bubble tea, milkshakes, and so much more, plus chef/co-owner Eumi de Jesus is a graduate of Red River College’s Culinary Arts program (the other co-owner is Eumi’s aunt, Amelia Co-Ping #familybusiness).
55 Waterford Green Common D1

Chocolatier Constance Popp – Outside of chocolates, Constance and her crew also make delectable ice cream using locally produced birch syrup. They serve it in housemade waffle cones and top it off with chocolate butterflies. Also look out for crazy good ice cream sandwiches and a fine selection of pops too.
180 Provencher Boulevard

Not a Waffle – Perhaps the kawaii-ist of the kawaii in Winnipeg is Not a Waffle, where the cute creations are served in waffle cone fishes (known as taiyaki in Japan). On top of filling these with fun soft-serve and plenty of toppings, they also turn these sweet fish-shaped waffles into sandwiches with red bean, make glorious milkshakes and layered smoothie type drinks, plus the store is like stepping into a shop in Tokyo’s Harajuku district. Get the matcha ice cream, obviously.
353 Langside Street

Le Monkey Bar – While Sargent Sundae and BDI lay claim to being closest to a bridge, Le Monkey Bar holds the distinction of actually being on a bridge. This kiosk greets you on the St. Boniface side of the Esplanade Riel pedestrian bridge with an all-vegan menu featuring numbers like frozen cashew “cheese” cake, dipped frozen bananas, and our new fav, the peanut butter sundae.

Black Market Provisions – While not technically an ice cream or shop just for sweets, we have to have them on the list because the Thai Phoon coconut milk ice cream from here is one of our favourite things in Winnipeg, period (also vegan, and gluten-free). It has candied ginger on top, while the coconut cream is infused with lemon grass and it’s just so marvellous. The malted chocolate Oreo ice cream (vegan too) is also out of control, while they recently started selling their famous pop cart popsicles here too (the Arnold Palmer is our new jam), so that’s exciting. Pretty much everything chef/owners Angela Farkas and Alana Fiks do is amazing, so please continue to support them.
550 Osborne Street

Sub Zero – Three words: Bacon. Doughnut. Sundae. This thing is like six inches tall and they even throw a little Canada flag on top of it too. They are known for their parfaits, many of which use local ingredients – like fresh rhubarb right now, while you can’t go wrong with the ice cream sandwiches filled with their vanilla soft-serve.
298 Jamison Avenue

Sweet Tops – This place excels at soft serve, particularly the pumpkin flavour put out every fall. Pretty much anything you can think of from Dairy Queen has a doppelgänger here, but made-in-house and better, including whole ice cream cakes. The logo, featuring a bowtie-wearing ice cream cone gets us every time – we just want to go hang with that guy.
949 Henderson Highway

Chocoberry Dessert House – Talk about #Adorbs, everything that comes out of the tiny kitchen at this Osborne Village café is almost too precious to eat. The milkshakes are magical and piled-high with whip cream (that sometimes feature faces), you can get sensational sundaes (go for the peach or matcha), while its waffles are a world all their own.
Unit B - 470 River Avenue

Teeyah's - At this candy emporium that is like no other in the city (seriously, if you can think of a flavour of pop or some form of sweet they have it) they also serve up a serious amount of cool treats to beat the downtown heat. This summer, you'll find plenty of soft serve along with 16 flavours of premium Manitoba-made ice cream, including fun numbers like Royal Canadian Mint (we hear it's worth every cent), and French Toast, along with all manner of wacky frozen treats like a hard ice cream cotton candy burrito, and legendary layer sundaes. Talk about mama mia Teeyah!
104-240 Graham Avenue

And finally, we can’t forget about going Italian on Corydon.  GG’s Gelati, Eva's Gelato and Nucci’s Gelato have all stood the test of time, offering customers a wide selection of flavours to take to the streets for a stroll down the strip.