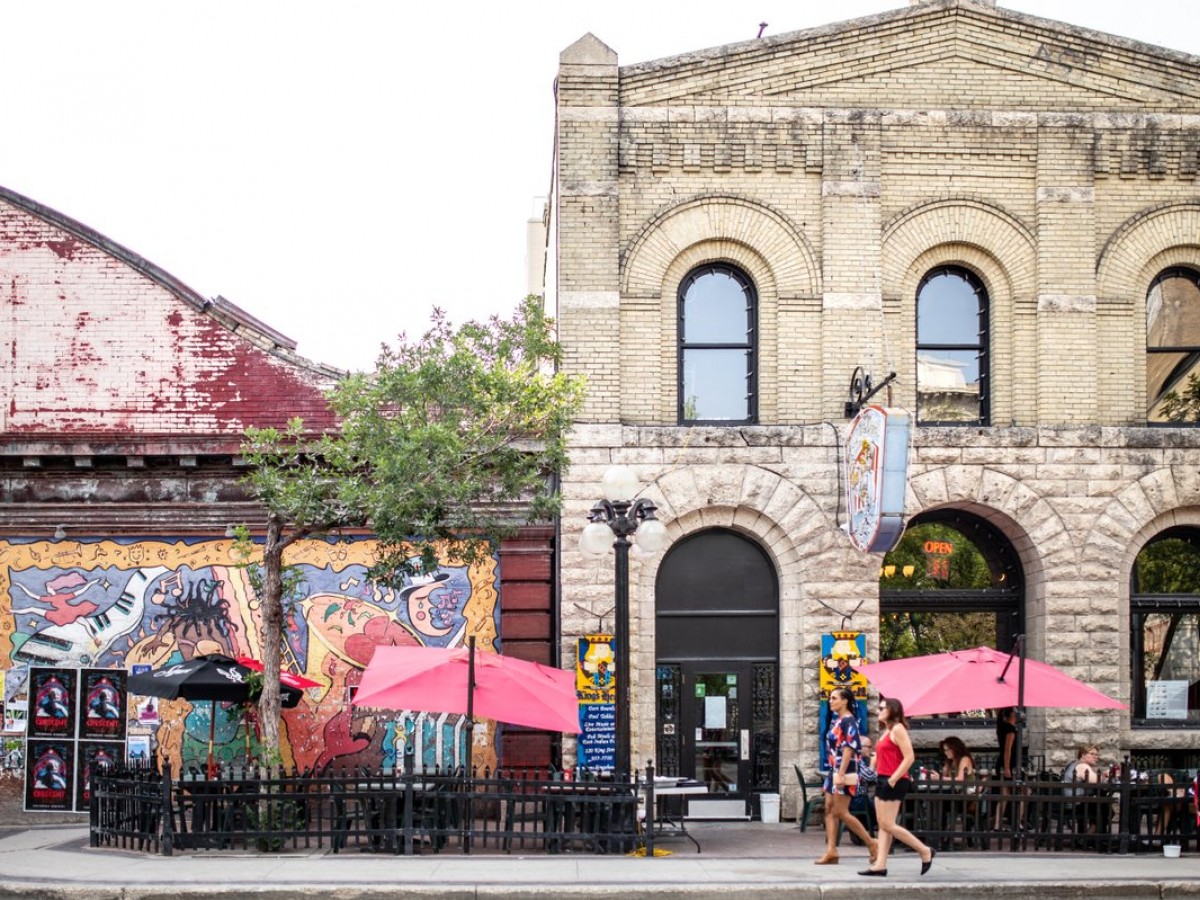 Patios are popping up in Winnipeg; here's where you can find them

It’s been over two weeks since the loosening of pandemic restrictions in Manitoba, which in Winnipeg heralded the start of patio season.

Given the current COVID-19 climate, this guide isn’t as extensive as it usually would be, but we can still all raise a glass to these restaurants who are doing their best to follow strict social distance protocols while offering an al fresco experience.*

Here’s a few of the spots in the city that you can go enjoy a socially distant dinning and drinks outing.

One of the city’s most-iconic patios, which faces Old Market Square in the Exchange District, was ready to go after the government’s announcement, as staff were already working to execute the new grocery service. The King’s Head Pub opened back up on day one, so you can now enjoy pub classics like bangers ‘n mash, curries and cold pints (with lots of local options on tap) on the evenly spaced out patio.

For even more locally brewed beer and most-excellent gastropub fare, check out  the patio at One Great City, which is open until 9 p.m. nightly (closed Sunday-Monday).

Fionn’s Grant Park was also ready to rock (responsibly) with their patio early last week. Owner Jay Kilgour and his team had Fionn’s patio up and running with new service protocols in place by lunch service on May 4, ensuring patrons can enjoy great burgers and even better fish and chips with cold pints until 10 p.m. Another chain that was quick on the patio draw is Smitty’s, which has had patio service on South Pembina since the fourth as well, while JOEY Polo Park and The Local on Garry now are providing patio service too, along with Brown's Social House across from Bell MTS Place.

Local chain Stella's has opened its brilliant rooftop patio on Pembina, while one of our readers, Lois Farley has emailed to say that the A And V Drive-Inn on Chevrier Boulevard also has opened its patio, and that it has "picnic tables and umbrellas and the best gyros in town!"

Another local chain which now has four of its patios open is Tavern United, including the locations at Polo Park, Fort Garry, Garden City and Transcona. The mighty fine rooftop patio of the Tavern United beside Bell MTS Place will be opening June 2.

Wasabi Broadway’s porch patio, which has been providing a cozy dining experience since 1999, opened just under a week ago. Go for a large selection of rolls, sashimi, nigiri and weekly Village Bay oysters. It’s one of the city’s best hidden gem patios and given its size, you’ll almost have the place to yourself right now due to social distancing protocols.

Another porch-style hidden gem patio can be found at Chaise Lounge and Café in St. Boniface, which is replete with some lovely greenery in boxes all along the deck. It also opened early last week offering everything from brunch this past weekend (Saturday and Sunday, starting at 10 a.m.) to dinner after 5 p.m. You can reserve a spot at info@chaisecafe.com or by calling the restaurant at 204.504.4012.

The Corydon Chaise location, located right on the main strip, also opened last week. Neighbouring Corydon stalwarts Bar Italia and Saffron’s – which have ample outdoor spaces for social distancing – have opened their their patios since they were given the green light for May 4. In St. Boniface, another old-school Italian restaurant is also back at al fresco. A table on Pasquale’s second-floor patio can be booked by calling 204.231.1403.

In Wolseley, we're willing to give the title of cutest little roped off patio to The Ruby West, where you'll find three two-top tables spaced over six feet apart on Westminster Avenue. On top of these, you can also dine on their cute little courtyard, which features four super cute tables too.

In St. James, the eclectic Greek fusion fare of Steve’s Bistro has been available al fresco for the past five days, which will cover all cravings for a gyros and white sangria. For even more sangria, Corrientes has you covered in the east Exchange under the umbrellas at its curbside locale. The patio opened May 4th too, so you can expect prompt service and the usual tasty, cheese-laden Argentinian-style pies from the Maury family.

Although it’s more of a selection of picnic tables as opposed to a patio per se, did you know that VJ’s Drive-Inn is back in action? They reopened last week (you should see how many people were craving those sloppy, delicious burgers on Mother’s Day) with new social distance protocols. They take your orders from the door, instead of having you come into that little room which looks into the kitchen. Here's our burger love song to this fine establishment.

One of Winnipeg’s most-acclaimed spots, chef Scott Bagshaw’s Máquè is now taking reservations for the socially distanced patio which opened on May 14. You can find the full menu here (which features favourites like the crab-fried rice, pork baos and that crunchy cucumber, minty, watercress and jicama salad), while Bagshaw’s Enoteca will also start serving takeout – including buttermilk fried chicken, the ricotta gnocchi with black garlic and the Deseo-style mac n’ cheese with smoked paprika – opened on the 14th too.

Peasant Cookery, whose patio also faces Old Market Square, is now providing contact-less service on the patio, with a new patio menu too on top of their regular to go items (including the housemade charcuterie and some top-notch burgers.)  You can score a patio seat from 12 p.m. to 8 p.m. Tuesday to Friday, and Saturday 2 p.m. to 8 p.m.

Very quietly The Forks -- Winnipeg's largest patio/outdoor dinging area -- opened to the public over May long weekend. About 40 per cent of the food kiosks are open, along with the outdoor Common bar, where you can get up to 20 wines and beers on tap. You can't currently dine inside The Market, while social distancing protocols are in place for the tables and chairs outside.

As well, you can also now also dine on the patio at Old Spaghetti Factory at The Forks, while the absolutely stunning patio of SMITH at Inn at The Forks is now open too (as of June 4), with an extended social distance approved patio, along with all their finely crafted farm-to-table plates, craft cocktails, and brunch service on weekends too!

*Please note: to avoid any possible unnecessary lineups and wait times, please call these spots ahead to reserve a seat. Many of these spots are now offering reservations for patio seats, which would normally only be available for walkups. The Insta post from Máquè was taken in summer 2017, so the patio will have a different seating configuration when it opens on May 14.

Anyone we are missing? Please email info@tourismwinnipeg.com and we’ll add you to the list.