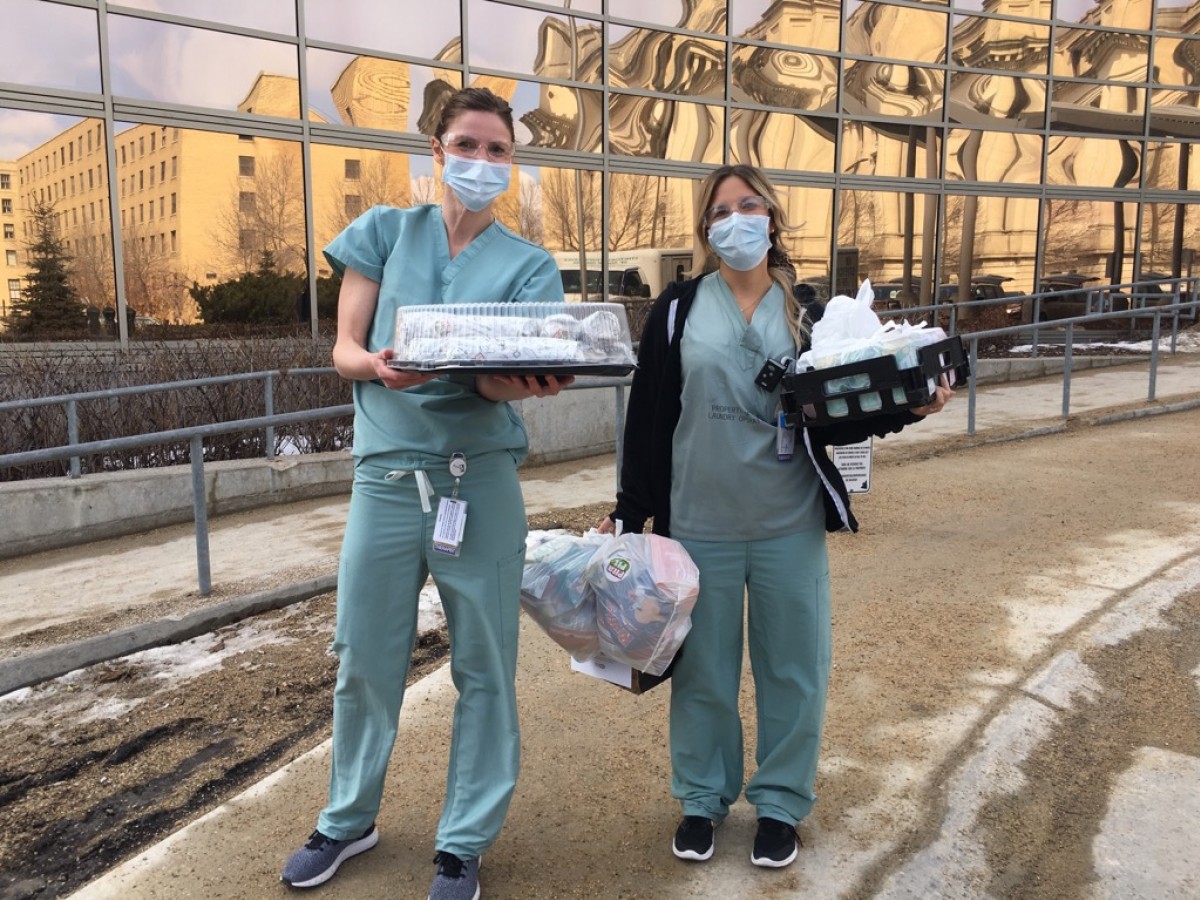 Here's just a few examples of restaurants, breweries, companies and customers helping hospital staff and those in need

Here in Winnipeg, a large number of this second category of people (the nice ones doing nice things) are members of the city’s culinary community, who are selflessly feeding frontline workers and those in need (with help from their loyal customers and some generous local companies).

Seemingly everywhere you look on social media right now, you see restaurants and breweries continue to go above and beyond, which is staggering considering the dire situation restaurants are currently facing.

Take for instance Darin Gentes, who owns three Pita Pits (Ellice, Sterling Lyon and Regent) here in Winnipeg. A friend of ours who is a nurse at Health Sciences Centre (HSC) told us how he is at the hospital almost every day, dropping off lunches at various departments, along with going to other hospitals and non-profit organizations.

“Darin did his first hospital order for his sister-law as she was stressed about work and not being able to see her family,” said Matt Gentes, the co-owner of Pita Pit Regent, who is Darin’s brother. “The nurses and support staff were so thankful -- it really hit home.”

“We started posting pictures of the deliveries on social media and within hours donations and ideas on where to send food to frontline workers started pouring in,” continued Darin Gentes.

“Together we have fed over 1600 hospital workers and over 3000 other COVID-19 frontline workers. From City of Winnipeg sandbaggers to grocery store workers,” said Gentes, adding that so many of these lunches were donated by E.H. Price, who (as you can read here) has been doing amazing things here in Winnipeg to combat COVID-19.

At HSC alone, we’ve also been told that Juice Me was doing drop-offs this week (you can find Juice Me products at locally owned markets across the city. Owner Agata Robb also does deliveries – we can’t get enough of the Spicy Ginger shots and have one every morning), while on Tuesday, Earls provided meals to everyone leaving day shift at HSC on Tuesday, along with a $15 Banville and Jones gift card to boot.

The Yujiro team, which includes the restaurants Gaijin Izakaya and Saburo Kitchen, started delivering free meals to hospitals one week ago, starting with St. Boniface and Victoria. They put out a similar call on social media before their first delivery and have since delivered 230 meals to HSC on Monday, and over 200 meals between Women’s Hospital, Grace Hospital, Deer Lodge Centre (which specializes in geriatric and veteran care), Cadham Provincial Laboratory and Portage District General Hospital on Wednesday. (Note: due to repairs needed to its basement, Yujiro is currently not offering takeout and delivery service for regular customers, but will be back at it soon. They've been using the kitchen at Gaijin to feed frontline workers in the meantime).

For the past three weeks Marion Street Eatery has also been using social media to find people to feed for free. It started with some surprise meals to fire halls, a pharmacy and daycare, and they’ve since donated bagged lunches to Morberg House, which assists the homeless in St. Boniface.

Today we had the privilege to help out in our community by donating 50 bagged lunches to Morberg House in St. Boniface! They will be taking those lunches and giving them out to those staying in shelters during this time. This was a reminder to us to be grateful for what we have. We hope to keep helping where we can, and hope everyone is spreading as much kindness as possible! #spreadkindness #dowhatyoucan #community #supportlocal #helpothers #begrateful #marionstreeteatery

Little Goat Food and Drink has been taking donations from customers so they can make meals for frontline since the start of the month. On April 3, they did 222 lunches for Grace Hospital and Cadham Lab, followed by an abundance of meals for night-shift health-care providers at Grace Hospital on April 8.

In late March, Yafa Café donated 30 wraps to HSC’s ER and has since offered 50 per cent off the first orders for health-care providers, seniors, and persons with disabilities for takeout or delivery, with free delivery for any subsequent order.

"From Our Kitchens to Our Heroes" is another initiative that is feeding frontline workers. It started on Easter Sunday and has been organized by Jennifer Chen, the Vice-Chairwoman of the Winnipeg School Division board of trustees. Chen has brought together several Asian restaurants to provide 50 meals every night for the next two weeks. These Asian, or Asian-owned restaurants and cultural groups include Empress of China – who did the first delivery to Grace Hospital, Thank You Canada, the Kurdish Initiative for Refugees, Khand Hoa Fresh Meats & Delights, 460 On The River, Eat on Samosa, Pizza Place (3735 Portage Avenue), Syrian Food, and Dairy Queen (Sterling Lyon Parkway). You can donate to From Our Kitchens to Our Heroes here.

This morning (April 17), BDI also announced they are in the midst of making 2,000 ice cream sandwiches for Grace Hospital staff, having partnered with the Grace Hospital Foundation and Gordon Food Service.

Finally, there’s one establishment that has been doing so much for those in need, and they haven’t even made it known on social media.

Trans Canada Brewing Co. has been delivering hundreds of pizzas and meals every day of the week to resource centres and shelters across the city.

“It all started by our team coming together looking for a way to help those in need. We had a lot of time and ingredients, so we just started making pizzas and sending them to shelters,” wrote theTrans Canada Brewing team to us in an email.

“It built from there... Currently, we deliver just over 200 pizzas and over 100 boxed meals every day of the week to various shelters and resource centres across Winnipeg.”

Shoutout @TransCanadaBeer who would never make it known but have been donating 200+ pizzas a day to local shelters. These guys never miss a beat #YWG pic.twitter.com/fa2Og6IrnV

*As well, as we’ve covered in previous articles since self-isolation began, chef Ben Kramer has been instrumental in getting restaurants to support the Main Street Project when everyone was at first shutting down their kitchens.