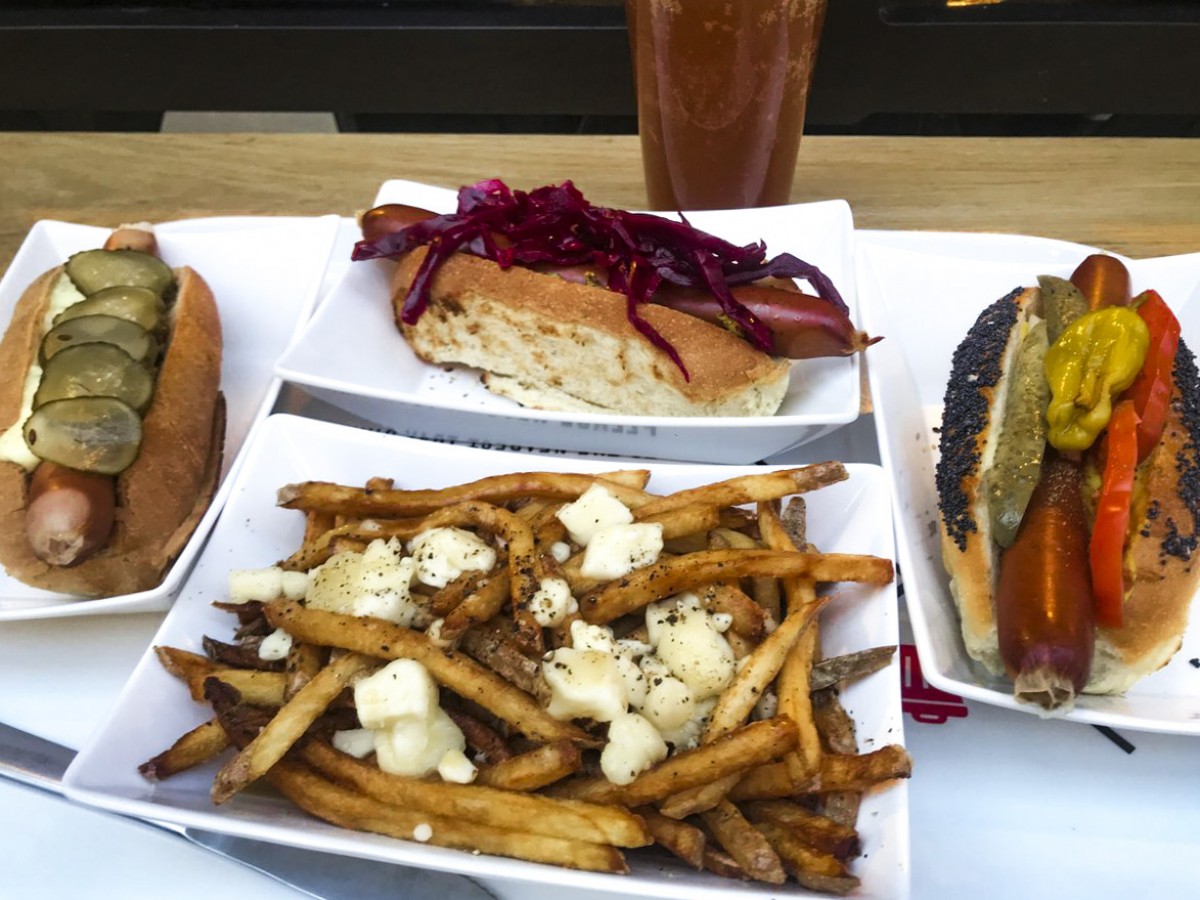 A selection of offerings from Wienerpeg

While we won’t wade into the hot dog flavoured waters of Winnipeg’s Wienergate, we don’t consider it frank to state that Wienerpeg, The Forks’ newest food kiosk, is surely the city’s most well-crafted wiener.

Wienerpeg is yet another hit for chef/entrepreneurs Steffen Zinn and Quin Ferguson, whose local food roster includes  The Red Ember – Winnipeg’s busiest and largest food truck, Wall Street Slice (co-owned by Edelma Mirand and Michael Sung) and The Red Ember Common, which is also located in the Forks’ Food Hall.

And like their other culinary ventures, everything at Wienerpeg uses local ingredients and is locally made – from the wieners, to the buns, to the root beer on tap.

The pork comes from  Zinn Farms, which is owned and operated by Andreas and Monika Zinn, Steffen’s brother and mother. Like the pepperoni and other pork products you’ll find at the Red Embers and Wall Street Slice, this means heritage-breed pigs (namely Berkshire) that are all pasture-raised on feed that Andreas’ mills too.

The beef is also local from  Lintott Farms. Cattle are grass fed and pasture raised, while the beef is dry-aged after processing.

“The dogs are just meat and spices, there’s no offcuts or fillers,” said chef and co-owner Ferguson. “So it’s just the good stuff.”

Now, does this all make for a better dog? Of course it does!

Our top choice would be the Scandinavian, which is all about a remoulade that is all zinged-up with horseradish. It also comes with housemade pickle slices sprinkled with caraway seeds, crispy fried onions for crunch and mustard.

If there was sheet music for hot dogs, this whistle hits all the right notes. The crunchy onions provide texture. The dog is amply sauced and acidic from the mustard, while the creamy sinus-clearing properties from the remoulade are welcoming. The meat-to-bun ratio is money too, meaning you’ll never end up with an all-bun bite while you can get your teeth around the whole ensemble. (And yes, you can’t describe a hot dog-eating experience any further unless you want to sound like a pervert).

The classic take on the Chicago dog, using an all-beef wiener, is also quite good. The pickle spear, mildly spicy pepperoncini, tomato slices and raw onion provide texture, a slight touch of spice, and some citrusy flavour, while the celery salt brings together all those vegetal flavours. It comes on a poppy seed bun with relish and mustard.

The New York, with spicy brown mustard and crunchy sauerkraut made from red cabbage, is better than any Papaya outlet we’ve had in NYC.

They also sell gluten-free corn dogs (made in-house, of course), and a marinated carrot dog for a vegetarian option.

The menu features classic thin fries, slim and crispy. They are great on their own, while the poutine version, with its peppery chicken gravy and Bothwell cheese curd does them no disservice either.

For drinks, we did both the orange creamsicle soda (which is slightly carbonated with just a hint of the creaminess) and the brewed root beer, which is spectacular and will most likely ruin root beer for you, unless you’re into the sugary thickness that is pop. (And if you are into official sugar drinks -- #WeJudge – they do also serve cans of Coke, Sprite, Coke Zero and Diet Coke).

As to the public’s reaction to spending a bit more on a quality, truly local dog (hot dogs here range from $4.95 to $6.50) on a homemade bun?

“We’ve been way busier than we first expected,” said Ferguson. “We sold 2,300 dogs in the first week, including 500 on Sunday.”

You can find Wienerpeg in The Forks Market (1 Forks Market Road) slinging daily from 11 a.m. until, as it states on the website, “it’s not busy anymore.”