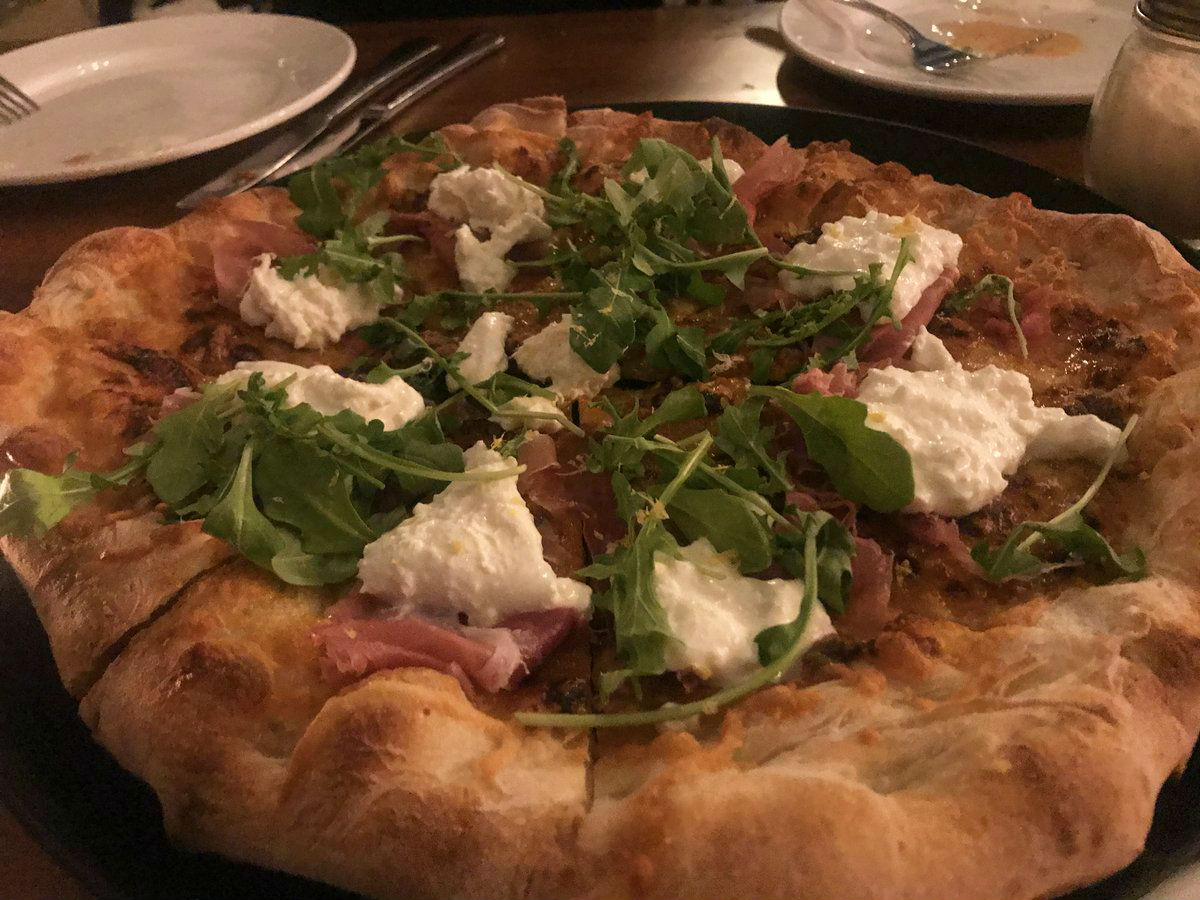 Corydon Avenue can’t get enough of pizza, and we can’t complain.

On the strip itself, which is historically referred to as Winnipeg’s Little Italy, you can get pies at Colosseo Ristorante Italiano, Saffron’s, Santa Lucia, Bar Italia, Café 22, and Confusion Corner Drinks & Food just to name a few, all of which are just a short dough-throw from one another. Further west you’ll find Bonfire Bistro’s wood-fired pizzas, and Mona Lisa Ristorante, along with some pizza chains too.

You’d think that they’ve reached peak pizza, but don’t tell that to Tommy’s, which just opened on January 16 on the corner of Corydon and Lilac. This place is already bringing in the crowds with excellent za, and some equally good starters.

Tommy’s is located in the former home of Aurora Pizzeria and Cafe, which was owned by a family who moved to Winnipeg from Rome. And while Tommy’s chef-owner Thomas Schneider may not have the same Italy-origin cred, he certainly has accolades from the Old World, being the Campionato Mondiale Della Pizza (World Pizza Championships) Best Pizza Maker in Canada award-winner (Classica division), which he took home in 2019 from Parma, Italy.

Schneider’s recent pizza background also includes attending Tony Gemignani’s International School of Pizza in San Francisco and competing in several more pizza contests across North America. He was also part of The World Pizza Champion team at the first-annual Las Vegas Pizza festival, which took place in 2019. When he was just 19 he opened two Papa John’s franchises in the Dallas-Fort Worth area, while he had his pizza start at 15 working at Winnipeg’s Doughboys. (You can find more on Schneider’s pizza-making background in an article here from Canadian Pizza.)

That said (talk about waiting for the lede to rise!), many Winnipeggers already know how good Schneider’s dough is, as he is the chef behind Timmy Tom’s Pizza in Trans Canada Brewing Co. (TCB), which has been going strong since 2015. (And yes, while Schneider now has his very own spot, you can still get pizza at the brewery, which TCB President Matt Tallman lays out for you here. Chef Schneider also gives a shout-out to Tallman and the Trans Canada team for helping him get his entrepreneurial start).

Anyway, about that great pizza.

The dough is fine tuned for sure. The crust puffs up around the edges like a crispy frittata, while throughout there are plenty of air pockets, with the flavour and texture more akin to freshly baked baguette. It’s not as chewy as the other more Neapolitan style pies you’ll find in town at Gusto, Red Ember, Vera etc. and is quite substantial, with one pizza totally shareable with a side or two.

We did The Cesarano (Pierogi Pizza), which is a must (particularly if you spent most of grade nine, like I did, making a far inferior version at Boston Pizza). While another sure bet is Tommy’s House Special (Spicy Honey) – which won that award in Parma, Italy. And yes, all the pizzas have two names, with the second coming in parentheses (much like most of the info in this article). We hope this is an ode to Radiohead’s sixth studio album Hail to the Thief, but more likely the second bit is simply the descriptor.

The sauce layer of the Cesarano is a light cheddar potato mash (in case you are imagining actual mashed potatoes), while the pizza is studded with hunks of bacon and green onion. It comes zigzagged with lines of sour cream, while spicy potato chips (which are added halfway through cooking, so they are neither soggy nor cut-the-roof-of-your-mouth crisp) top it all off. It runs almost the full gamut of flavours – spicy, tangy and salty, while the creamy potato layer makes it one filling number.

The House Special is even dreamier, with a slightly spicy and just sweet enough base, and topping that round out the flavour profile, with some bitterness, fattiness, saltiness and zest.  The bitter is from smatterings of arugula, while prosciutto is added halfway through cooking just so it has begun to melt into the dough. The best part is the slabs of creamy burrata, which are topped with plenty of lemon zest, which works so well with the bready crust.

While the pizza at Tommy’s rocks, one of the best thing we tried was the calamari. The batter is light and crunchy and deep brown, while the squid has just the right amount of chew. It comes with two kinds of aioli, one a simple basil version, the second a really tasty sweet pepper version. You also get a small ramekin of pico de gallo with it, which makes for a nice refreshing palate cleanser of sorts between bites.

The menu has more classic Italian starters like pane fritto, fried burrata, meatballs (made with brisket, as opposed to a 50/50 pork/beef blend) and bruschetta, while they do truffle fries and a charcuterie board too. The salads all looked robust, coming in large bowls, while, on top of the 11 New York style pizzas, the kitchen also does 30 Detroit-style pizzas per day (15 medium, 15 large), which are rectangular, have a deep pan crust, and are loaded with toppings and heavily sauced.

The main dining room is cozy with comfortable chairs and a sunroom like setting, while there is additional seating upstairs. The bar offers wine by the bottle and glass, along with a selection of draft from Trans Canada Brewing Co. (of course). The kitchen is located right at the front door, which is a nice touch as you can watch all the pizzas being made, most of which (as mentioned) get some sort of additional treatment half way through cooking.

Even with all the extra Italian competition on the Corydon Strip, this newest entry will surely rise above, while come summer the courtyard style patio will be a great place to spend an evening.