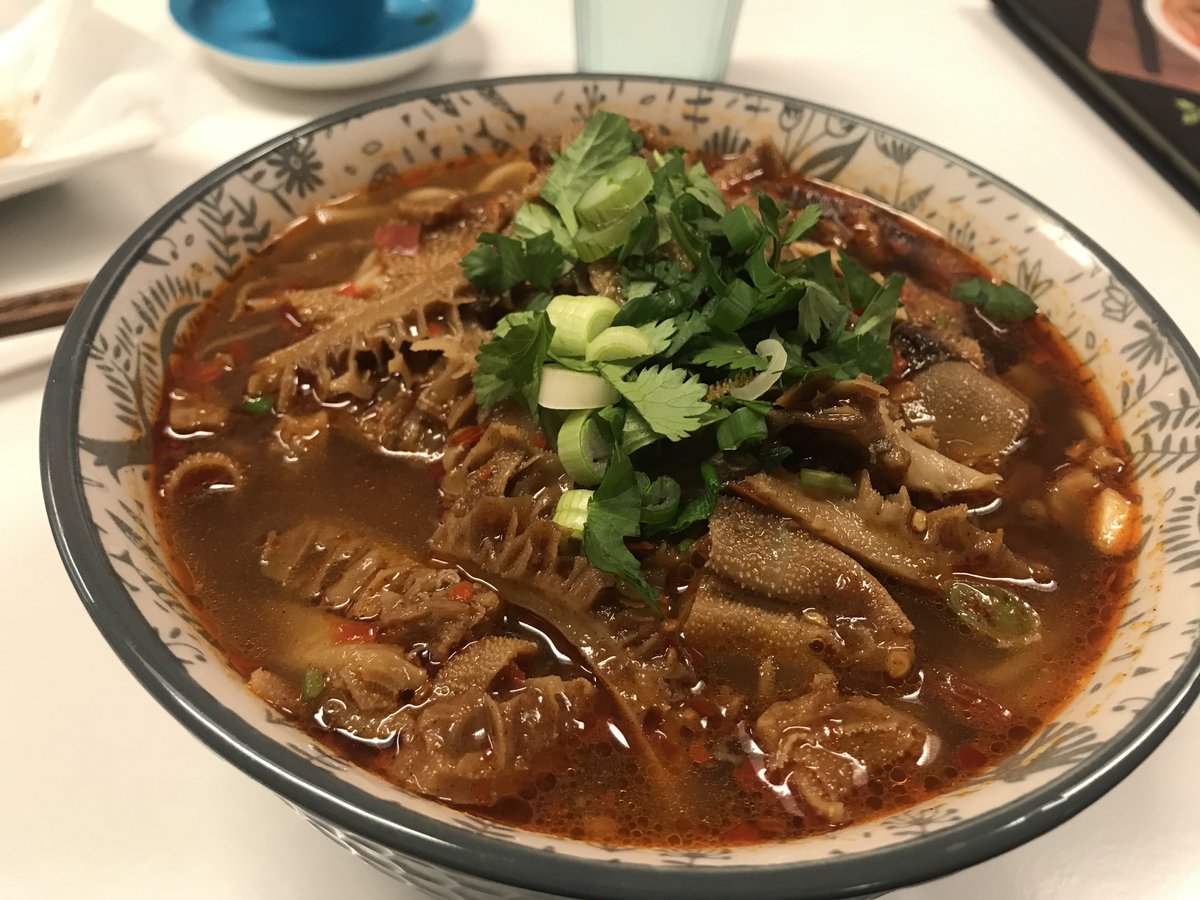 Behind the Domo station on Academy, sandwiched between the 7-11 and a hair salon, is a little piece of Changsha, China – and a deliciously spicy one at that.

Within its doors you’ll find handmade rice noodles made fresh daily from chef Wendy Yin, while her husband Jack Chen affably runs the front of the house, slinging bowls of noodles, complex broths and hotpots representative of Hunan cuisine, which is noted for its chilies and fresh herbaceous ingredients.

Yin and Chen moved to Winnipeg from Changsha, the capital of Hunan province in 2014. Soon after, they rented a kitchen space offering catering services, making rice noodles which they were then selling to other Mandarin-speaking customers who had learned about the culinary couple through social media.

“Our [first] customers were on WeChat” said Chen, referring to the Chinese multi-purpose messaging, social media and mobile payment app. “Most of them were Chinese students and they were asking us about coming to pick up noodles or to come eat at our house.”

“Now we have over 1390 customers who follow us on WeChat [here in Winnipeg],” said Chen, which he did while scrolling his phone to show me the hundreds of followers.

With that much attention from the young Chinese population, opening a storefront restaurant was an obvious choice, and the couple made quick work of turning the former home of Kudara Sushi – which was a super cute Korean restaurant – into Suofen Noodles this past November.

They’ve kept Kudara’s cutesy vibe, which includes bright pink walls and modernist white tables and chairs, merely replacing the art on the walls with new art, much of which highlights their home city of Changsha. There’s also a cool little tapestry that details the four-step process of making the toothy, fresh rice noodles.

As to the noodles themselves, they are much more substantial than the rice vermicelli noodles many of us might be more used to. For lack of a better reference, these ones are thicker and more substantial, like a Shanghai noodle or a bucatini. They are not pulled like la mian (which you can find at spots in the city like Dancing Noodle), but rather cut by hand, which Yin does offsite at their kitchen commissary space they still rent. (The kitchen space a Suofen is tiny, with no available counter space for rolling out rice dough).

I had my noodles in the signature tripe soup ($15), which came loaded with cilantro, scallions and chilies. The texture of the tripe was perfect, just a touch chewy like perfectly cooked calamari, while the broth is so aromatic and flavourful, brimming with anise and countless subtle flavours you can’t quite pinpoint. Chen tells me that there are over 50 spices/seasonings that end up in this base, and most of the soup bases here. As to its heat; I’m in no way one to eat mouth-numbingly spicy food, but this broth kept me coming back for more and more, all while having to dab the sweat from my cheeks after every third bite.

And it’s not all spicy stuff. The other dish we couldn’t get enough of was a rich bowl of shredded pork and muer (wood ear fungus) with chicken soup ($12). This broth was so buttery, while there were plenty of chewy and crunchy textures from the thinly cut pork and the black mushrooms. It too is topped off with a pile of cilantro and scallions and made for ideal eating on a cold winter’s night, encasing you like the soup version of a snood.

Before we dug into these bowls, our table did a plate of the gold medal spicy beef ($28 for a large plate), which comes piled high over a pool of chili oil. This too had just enough heat for us to handle (Chen joked when I first ordered it that their regular version would be too spicy for us, so they would tone it down), while the crispy beef, which is tossed in potato flour before being fried, kept presenting waves of flavour, lapping our palates with cumin, garlic, and vinegary tang. It is served cold, which surprised us at first, but it made for addictive eating.

There are also numerous snacks on the menu, which is the norm with Hunan cooking. Standouts included the vegetable dumplings, five of which my two-year-old hammered, and the fried beef fat (it’s meatier than it sounds), which is covered in a crispy coating and is smattered with cumin seeds and a sweet vinegary sauce before being placed on a wood skewer.

If you look into the fridge on the kitchen counter, which was the former sushi case, you’ll find numerous things on sticks, including lotus root ready for the fryer, and enoki mushrooms wrapped in pork. The menu also includes plenty of other authentic Hunan noodle bowls, like braised pig’s feet, braised beef, and red oil pork intestine which looks mouth-numbingly spicy.

For dessert we did the fried bananas. The batter is super light like a tempura, while there is a honey sauce that made us think of banana pancakes. Needless to say, our two-year old became very territorial of these once he took his first bite.

“I know that this style of restaurant is very famous in China and is very popular with young people,” said Chen, noting that their current clientele is also young.  “But in Canada you don’t find [many] like this, [especially] making their own rice noodle.”

He continues, “I have a dream to open up a restaurant like this in every city in Canada. But for now, I have a plan to open a second restaurant in the south area of the city this year, where most of the Chinese people live.”

We’ll keep you posted on that second location, but until then, grab yourself one of the five tables at this hidden gem on Academy. With winter already firmly set in, we could all use the extra heat.

Suofen Noodles is located at 427 Academy Road. It is open 4 p.m. to 11 p.m. six days a week, closed on Tuesdays. You can follow them on Instagram here.